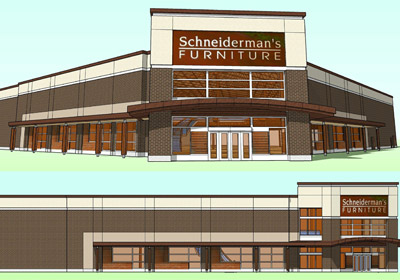 In order to contend with heavy competition, Schneiderman’s Furniture is expanding its Woodbury showroom and plans to add about 10 new jobs.
October 03, 2013

Schneiderman’s Furniture is expanding its Woodbury location from 35,000 to 70,000 square feet and will be raising the roof of the building by 20 feet on Tuesday and Wednesday.

In addition to the expansion, Schneiderman’s is renovating the interior and exterior of the Woodbury showroom, “we are revamping the whole space, it will hardly be recognizable when it’s finished,” Larry Schneiderman, who describes himself as the company’s “sofaman” of the board rather than chairman, told Twin Cities Business.

After the expansion and renovation, Schneiderman said the company will also add about 10 new hires to its previous 16 employees in Woodbury.

Schneiderman said the business has “grown nicely since the difficult years of 2007 and 2008.” This recent expansion is coming right after a “wall-to-wall” renovation of the company’s Roseville location last year.

“You have to be improving what you’re doing all the time just to be in the hunt,” said Schneiderman. “So we’re always looking for new growth opportunities, and often that means expansion, as well as renovation.”

Schneiderman says Hom Furniture is their biggest competitor, “But we have less of a ‘mass-furniture approach’ than Hom—we have a more personal touch,” he said. “Our goal isn’t to sell you a couch but to sell you the couch.”

While the roof is just now being raised for the second level, the expansion construction began August 1. The store is expected to reopen on January 1.

Schneiderman’s Furniture has a total of 200 employees spread throughout its five locations. Woodbury employees are currently working at other sites until the expansion is complete.

Schneiderman did not disclose the cost of the expansion or the company’s total annual revenue.