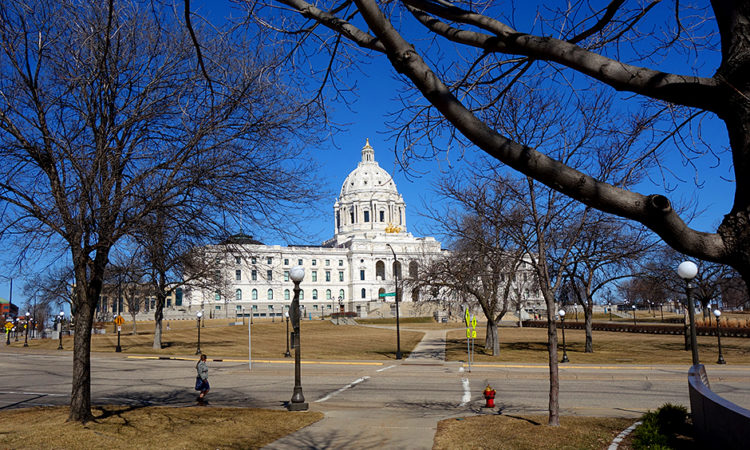 Because the DFL-controlled House and GOP-controlled Senate take such different approaches to issues, and because these initial budgets are hundreds of millions of dollars apart, these are starting positions, stage-setters for future negotiations. MinnPost photo by Peter Callaghan

The march of the omnibus budget bills shows how far apart the GOP-controlled Senate and the DFL-controlled House really are.
By Peter Callaghan
April 13, 2021

It can sometimes seem like lawmakers in St. Paul do things just to remind people that Minnesota is the only state in America with a divided legislature.

That was the case last week, with what might be called the march of the omnibus budget bills, a biennial event in which DFLers who control the House and GOPers who control the Senate each produce fat documents that contain budget decisions for 20 or so areas of state government.

Some of the policy choices included in the bills have been introduced as separate pieces of legislation. Some have not. The House Transportation omnibus bill, for example, included a first look at a gasoline and sales tax increase that would total $677 million in the next two-year budget period.

The corpulent bills require a single yes or no vote affecting dozens and dozens — and often more — distinct policy questions. (Despite this, legislative leaders argue these bills don’t violate the state’s constitutional requirement that bills take on only a single subject, mostly because the Minnesota Supreme Court has given lawmakers a wide berth on the issue.)

“When you vote on an omnibus bill, there are things you like and things you don’t like,” said DFLer Rep. Tina Liebling, a DFLer from Rochester who chairs the House Health Finance and Policy Committee.

Because the DFL-controlled House and GOP-controlled Senate take such different approaches to issues, though, and because these initial budgets are hundreds of millions of dollars apart, these are starting positions, stage-setters for future negotiations, ones that just happen to also satisfy partisan bases.

‘No new taxes’ vs. ‘No cuts to programs’

The various starting positions are these: DFL Gov. Tim Walz is proposing a $52.27 billion two-year budget; the DFL-controlled House is proposing $52.5 billion; and the GOP-controlled Senate is proposing spending $51.8 billion. The state’s current budget is $48.36 billion.

But House DFLers and Senate GOPers both have ultimatums for their budget proposals: for Republicans, it’s no new taxes; for Democrats, it’s no cuts to state agencies and programs.

While those goals appear to be unresolvable, the surplus, the economic forecast and the money coming to the state via the American Rescue Plan —  $1.9 trillion stimulus bill pass by Congress and signed by President Joe Biden in March — might offer a way out.

Gov. Tim Walz is expected to make yet another revision to his 2021-23 budget plan — his third — outlining how he will spend the state’s share of American Rescue Plan money. Of those funds, $2.6 billion is as close to free money as the state has ever gotten. It can be used for COVID-related expenses, both future expenditures and reimbursements for funds paid out by the state over the last year. The money can even cover lost revenue from the recession brought on by the pandemic, a figure now estimated to be $470 million.

And while ARP money is not to be used for tax cuts, the U.S. Treasury has said cuts can be done with local funds, and the department has continued to soften its approach to letting states conform to tax cuts in the federal law. The prime example of that is proposed tax relief for businesses who got Paycheck Protection Plan loans and for workers who received the unemployment insurance top-off. Both the GOP and the DFL want those cuts — though the details have yet to be agreed upon.

Some policy areas are so far apart that any agreement seems unlikely. The House DFL expands access to voting in its state government omnibus bill, including allowing convicted felons to vote once they are no longer incarcerated. The Senate GOP adds in provisional balloting for those who register on election day and tries again to require photo ID at the polls. Public safety positions also show little common ground.

“There’s a fair amount of difference between the House and Senate but that is our job to make those two come together and pass them and get it to the governor,” Senate Majority Leader Paul Gazelka said Thursday.

What does “fair amount of differences” mean at the Minnesota Legislature?

For now, the House DFL is calling for tax increases to provide what they term sustainable funding for existing spending, as well as increases in funding for education, child care, small business aid and other issues.

The tax hike proposed by the House DFLers is smaller than one proposed in Walz’s budget, and it doesn’t produce a net increase in revenue for the next budget period. Instead, it raises enough money to pay for other tax cuts; it also doesn’t collect spendable revenue until the 2023-25 budget period.

In stark contrast to the DFL’s spending plans, the Senate GOP is calling for no additional taxes for a spending plan that has already been benefited by improving economic forecasts and tax collections, a growing surplus and federal aid from Congress.

But that alone hasn’t offered enough separation between them and the DFL, so they have proposed budgets targeting a 5 percent reduction in spending for state agencies and programs, though it has sometimes appeared that even some GOP senators have found those targets too low. During committee meetings on the various omnibus bills, GOP chairs have rejected some DFL amendments by saying they would exceed the spending targets given to them by their leadership while noting they don’t necessarily oppose the DFL proposals.

What about ARP money?

The coming ARP money produces another place for disagreement, even as it provides some hope for an ultimate deal. House Ways and Means Chair Rena Moran, DFL-St. Paul, said last week her budget will — for the most part — does not include ARP funds in a spending plan. Minnesota Management and Budget estimates that state and local governments and agencies will receive almost $8 billion from the American Rescue Plan.

Much of it will flow to the state for appropriation. That money could be part of a budget passed by the Legislature, though current law gives Walz the power to spend it on his own if lawmakers fail to agree on what to do with it before the session ends on May 17. And because the federal government has yet to provide what’s termed “guidance” for use of the ARP allocations, Moran said she is waiting to decide. The DFL’s budget plan does tap into a separate federal allocation for child care assistance in a $600 million spending boost in that area.

On Friday, Gazelka said the Senate GOP would introduce separate bills to appropriate all of the federal money sent to the state government to build roads, bridges and water systems; to refill the unemployment trust fund; and for grants to small businesses, tourism and entertainment venues.

The GOP bills also propose that the costs for summer school and other COVID-related catch-up programs for students should come from federal relief funds being sent directly to school districts — not from state accounts.

The Education budget also exposes glaring differences in philosophy. The House DFL would boost the funding formula for local school districts by 2 percent in each of the two-years covered by the budget. It would also increase funding for summer school, maintain the number of pre-kindergarten slots at 4,000, and boost mental health counseling and tutoring. Democrats say the money is needed to help districts and students recover from pandemic-related disruptions.

Senate GOPers fund none of the House’s new priorities in its proposal, and the bill includes restrictions on transgender students participating in sports and a ban on governors using emergency powers to close schools. It also creates educational savings accounts that would direct state funding for students who withdraw from public school into accounts to pay for private school tuition.

The budget will ultimately be worked out in conference committees that include House Democrats and Senate Republicans. And like two years ago, with the same power dynamic in play among the Senate, House and governor, it could even be the three leaders — Gazelka, Hortman and Walz — making the decisions large and small.

Unlike the march of the omnibus bills, however, that gang of three works completely behind closed doors.