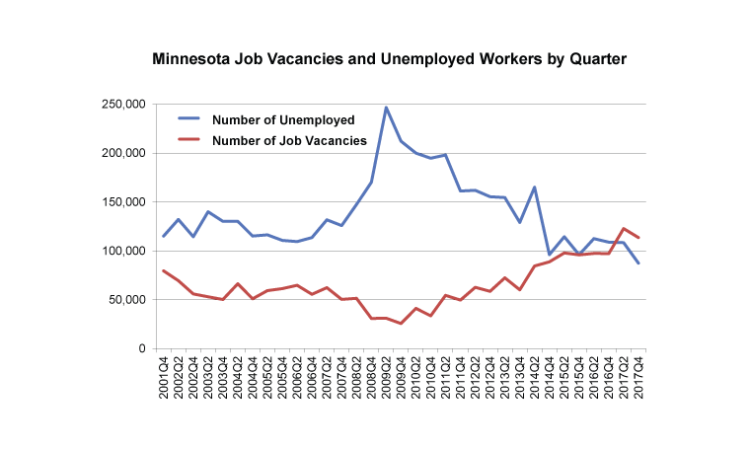 Minnesota employers reported nearly 114,000 job vacancies for the fourth quarter of 2017. This is a 16 percent uptick from the same period the previous year, according to figures released Thursday by the Minnesota Department of Employment and Economic Development (DEED).

“These figures indicate that both the economy and hiring demand are strong statewide,” said DEED Commissioner Shawntera Hardy in a press release. “This tight labor market underscores the importance of investing in DEED’s and other training programs, specifically for Minnesotans with barriers to employment, and deploying strategies to help employers find the talent they need.”

The vacancy rate rose from 3.6 percent – 3.6 vacancies for every 100 jobs in the state – in the fourth quarter of 2016, to 4.2 percent in the final period of 2017. The biannual Job Vacancy Survey also revealed that Minnesota’s rate of unemployed people for every open job is now 0.8.

In terms of which industries accounted for the highest percentage of vacancies, the health care and social assistance sector topped the list, with 22.6 percent, followed by retail trade, accommodation and food services, manufacturing, and administration and waste services.

However, the most job vacancies in general were found among the occupation of retail sales, with 8,278 openings. There were 6,640 openings for personal care aides, and 3,251 vacancies within food preparation and serving. Smaller companies, of less than 10 people, had a higher vacancy rate than larger firms, comprised of 250 or more employees.

The median wage for job vacancies was $14.34 an hour, with variations based on experience and education requirements. A majority (68 percent) of the available positions did not require postsecondary education or any training beyond a high school diploma.

A narrow majority offered health insurance. Half the vacancies were full time – while 41 percent of the other half were part-time, and nine percent were for temporary or seasonal work.

“This basically has not changed since we started the survey in 2001. It’s just the structure of the economy,” said Casale. “In this labor market, those jobs (retail, food service, child care, etc.), jobs are turning over constantly because people are moving to better-paid positions or more full-time work. So those areas are constantly hiring for a lot of open positions at any one time.”

For more details on the findings of the fourth quarter 2017 Job Vacancy Survey, go to the DEED site.