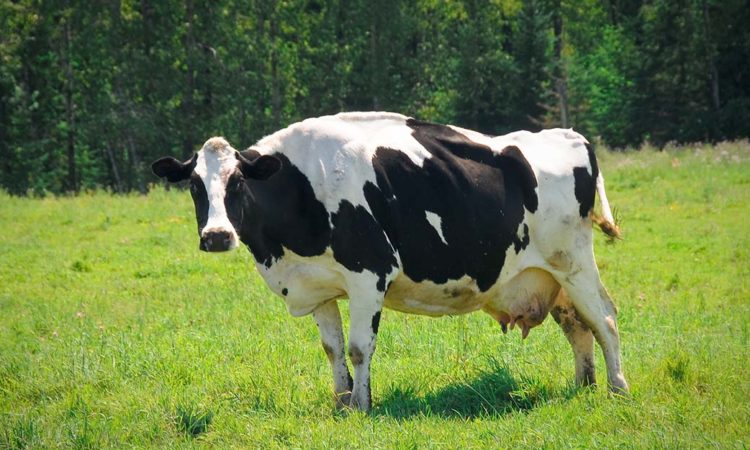 A recent panel ruling means that Minnesota farmers could soon see better prices for their products exported north of the border.
By Ashley Hackett
January 13, 2022

Times are tough for Minnesota dairy farmers. High labor and feed costs and fluctuating prices for products like milk, cheese and butter make for uncertain business. Many farmers are giving up: in 2021, Minnesota lost 154 of its roughly 2,100 dairy farms.

But a recent settlement brokered under the auspices of the USMCA trade agreement, the Trump-era replacement for NAFTA, brought some good news for Minnesota dairy farmers and the industry in the U.S. generally. After a ruling by a special disciplinary panel that found Canada was violating its agricultural trade agreement with the U.S., Canada is now required to change the way it sells dairy products imported from the U.S. in ways that will be advantageous to American producers.

Although those in the dairy industry see this trade win as a great development for the industry, it’s still unclear how big of a difference it will make for individual Minnesota farmers as the number of the state’s dairy farms continues to dwindle.

Canadian protection of its domestic dairy industry is a recurring problem in international trade.  When former President Donald Trump took office, he made headlines talking about the “tremendous trade barriers” between the U.S. and Canada, especially the tariff of “almost 300 percent” on dairy products.

The USMCA had relatively small changes in trade policy compared to NAFTA. Agriculture was a bit of a controversial topic in the agreement, though — it was the only section that was not  negotiated trilaterally. Instead, three separate agreements were made between the three countries. The U.S.-Canada agreement contained fairly significant restrictions and tariff rate quotas on agricultural products (mainly dairy, sugar and poultry products), while the U.S.-Mexico trade agreement was not quite as strict.

Unfortunately for the U.S., Canada had a history of what some trade policy analysts call “shady” trade loopholes with other countries in Europe. Take European cheese: Canada promised the European Union that it could export certain quantities of cheese duty free into Canada. The cheese was supposed to be made available to all actors in the Canadian food and agricultural sectors. But instead of selling the European cheese right to consumers in a grocery store, for example, the Canadian government instead gave a large portion of the cheese to Canadian cheese makers who were then able to sell the cheese as their own product.

The precedent that Canada had set with some European countries meant that dairy trade policy experts had their eye out for a similar “loophole” effort in its trade deals with the U.S.

“Canada’s approach on dairy is very different from its approach on other agricultural products,” said Shawna Morris, senior vice president of trade policy for both the National Milk Producers Federation and the U.S. Dairy Export Council. “They’re very much protectionist and inward looking. And the sole focus of their policies is…working to try to find, let’s say, creative ways to chip away at how those [policies] actually play out in practice.”

Canada’s agreement to the U.S. was that a specific quantity of dairy products could be imported from the U.S. at lower tariff rates. Canada was not to “limit access to an allocation to processors,” meaning that the country was not allowed to send those low-tariff rate dairy products to — for example — cheese processors or cheesemakers instead of direct to grocery stores.

“Are you allowed to sell to all willing buyers in a country, or are you forced to sell to just one group that sells products that compete with yours?” Morris said. “And the case was about the fact that Canada chose the latter route rather than the sort of common sense approach of the first route.”

As it turned out, what Canada was doing to the U.S. was exactly what experts like Morris had expected: In the first dispute settlement brought under the USMCA since its inception, a disciplinary panel found that Canada violated its agreement with the U.S. by sending 80 to 85 percent of the low-tariff U.S. dairy products to Canadian processors, rather than allowing the dairy products to be sold directly to consumers.

This meant that U.S. farmers who wanted to deal with Canadian markets often had to settle for lower prices from processors than they would get from end-line retailers and distributors.

The official panel decision occurred on December 20 and was announced on January 4. Canada now has 45 days from the December decision (February 3) to adjust its system to address the problems that the U.S. identified.

“We hope by the third that Canada announces a change of its plans. We expect them to do that,” Morris said. “It’s possible that Canada blows past the date and has not have made any changes, or it could be that the U.S. disagrees and says Canada’s changes don’t comply. So all of those are possibilities still.”

If Canada doesn’t satisfy the U.S. with its changes, the U.S. government could levy retaliatory tariffs on Canadian exports to the country.

“Typically, when countries put together these types of retaliatory tariff lists, they tend to spread it out across various products and sectors,” Morris said. Any potential retaliatory tariffs would not be levied solely on dairy products, but rather spread out across other industries in an attempt to get Canada to comply.

“This particular decision was pretty landmark for a couple of reasons,” said Sarah Schmidt, vice president of public affairs at Associated Milk Producers, Inc. “One is certainly the dairy connection. But first and foremost, probably for our country as a whole, it was the first time that the USMCA agreement was upheld. That was a big win for all of us.”

Minnesota Sen. Tina Smith has had her eye on this issue for years — in 2020, she and Republican Sen. Mike Crapo of Idaho led a bipartisan group of 23 senators in calling for the enforcement of USMCA dairy provisions. They wrote a letter to then-USDA Secretary Sonny Perdue and U.S. Trade Representative Ambassador Robert Lighthizer asking them to hold Canada accountable in their trade agreements. Sen. Amy Klobuchar was also a cosigner of the letter.

Fischbach, whose district includes almost the entire western border of Minnesota and a lot of the state’s farmland, said that she was very excited about the recent ruling.

“We’re very happy with the outcome of the dispute,” Fischbach said. “And, you know, I think that full implementation and robust enforcement of the USMCA dairy terms will certainly increase Minnesota’s dairy exports and generate positive returns for our state and western Minnesota.”

Fischbach said that when she has spoken with some of her constituents in the agriculture and dairy farming industries, she’s heard that they have been struggling with inflation and supply chain issues. But more than that, she said, dairy farmers are struggling with workforce issues and making sure that they have the employees they need. She said an economic boon like this could make a big difference for some farmers.

“[Dairy farms] going out of business has been kind of a slow attrition over the last few years,” said Minnesota Department of Agriculture Commissioner Thom Petersen. The average age of a farmer in Minnesota is 58, and Petersen said that farmers aging out of the field and last year’s drought pushed a lot of farmers into retiring early. At the same time, Minnesota’s remaining dairy farms are getting bigger.

Like most farmers, dairy farmers’ income depends on a lot of uncontrollable factors, like weather and international commodity prices. There’s also been issues of supply and demand. On the supply side, there’s more milk on the market. Farmers have been able to breed for specific traits, like higher milk yields and healthier cows, and as a result the dairy industry has become more efficient. Meanwhile, demand for dairy products has generally trended downward over the last decade.

“Canada’s an important trading partner, but [the USMCA panel decision] isn’t going to change the world for our dairy farmers or anything. But every little bit helps right now,” Petersen said. “Milk prices are a little bit stronger right now, which is good news. And trade is an important part of it. Of course, Canada being a close partner is helpful.”

Petersen added that one exception to the downward trend of dairy prices came during the pandemic: Farmers saw strong markets for cheese and butter in particular.

“What we did find during the pandemic when people were returning to those things that brought them comfort, we saw a great increase in demand for cheese, butter and fluid milk,” said Schmidt from Associated Milk Producers. “Annual butter consumption grew by 19 percent in 2020.” Though it’s hard to say for sure, Schmidt said this spike in consumption may have come from the breadmaking craze early in the pandemic. By the end of 2020, Schmidt said, total dairy sales in the U.S. were up 13 percent.

“I don’t know that I can specifically say, ‘yeah, we’re going to add one dollar to every milk check,’ but anything that we can do to grow demand is a good thing,” Schmidt said. “With trade agreements like this, I think length of time is important because you’ve got to make connections with customers in these countries you’re exporting to. And it takes time to build those relationships. So I think we’re in it for the long haul with USMCA, and I think that as relationships [between the U.S. and Canada] continue to grow, it’s going to be a good thing for Minnesota dairy.”