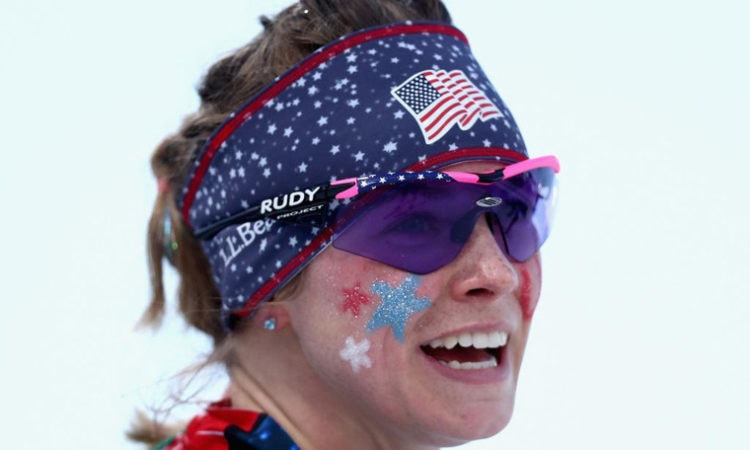 Jessie Diggins at the 2018 Winter Olympics

Minnesota native and Olympic champion Jessie Diggins played a pivotal role in securing the hosting rights. She spoke with TCB about bringing the skiing event home for the first time.
By Sam Schaust
September 28, 2018

“It’s not just because I’ve raced about 170 World Cups now and not one of them has been in my home country,” the Afton native tells TCB. “This is going to be the first time in my professional career—in the lifetime of all the people I’m currently racing with—that any of us have gotten to race in the U.S.

“On top of that, it’s in my backyard,” Diggins exclaims over the phone. “What an incredible, cool thing to bring here!”

While details are still scarce, here is what’s known: Come March 2020, a competitive event under the annual International Ski Federation (FIS) World Cup will be held at the new “Trailhead” facility in Theodore Wirth Park in Minneapolis. World-class skiers from around the world will be participating—both male and female—in what will be one of the final races of the World Cup circuit.

Unlike the FIFA World Cup, for instance, which features country-led soccer teams vying for a grand prize every four years, athletes compete individually in a multi-event structure similar to the Tour de France. Races are held in countries all around the world—between 35 to 40 races in total—and competitors must participate in each event to continue. Each World Cup culminates at the final leg, which Minneapolis will get to host one-third of.

The first event will be in Quebec, according to Diggins, followed by Minneapolis, and then Canmore—a mountainous town in Alberta, Canada.

“There are a lot of logistics behind the scenes,” Diggins says, such as TV scheduling and athlete transportation, “which is why I think we’re still waiting for those final details.”

Diggins, who made history last winter when she became one of the first American athletes to win Olympic Gold in cross country, is heartily encouraging not just Minnesotans but all of Americans to mark their calendars and be present for the race.

“Every sports professional dreams of getting to race in front of the community that raised them and nurtured their love of the sport,” she says. “I would not miss this for the world. I’m going to be racing for a number of years. I’m going through at least one more Olympics, so unless I myself am very sick or very injured, I will be competing.”

But will her Minnesota roots play an advantage on the trail? Not in the way you’d suggest, Diggins claims.

“I have not gotten to ski or compete on [Theodore Wirth Park] trails since 2011, so I would say in that sense I don’t have an advantage over my competitors,” she says. “But I do have the hometown support and love, and that is really hard to put a number on and that in itself is a huge advantage.”

Not only did Diggins' gold medal provide the spark behind Minneapolis’ bid to host the event, Diggins herself worked alongside the Loppet Foundation, U.S. Ski and Snowboard organization and other parties to bring the World Cup event home. In April, Diggins met with Gov. Mark Dayton about making the bid after building interest among local lawmakers. She also met with potential sponsors and organizing committee members to help raise $1.2 million—the estimated amount needed for Minneapolis to host.

“When Jessie called me and asked if the Foundation would support her dream of bringing a cross-country World Cup event to the U.S., my team and I responded with an enthusiastic ‘yes!’” said Loppet Foundation executive director John Munger in a statement. “Her ask was a no-brainer for us because we, too, have dreams of sharing this spectacular sport with the world. That’s why we’ve worked hard over the last sixteen years to elevate cross-country skiing, and adventure sports widely, starting in our own backyard.”

Notably this week, Minneapolis also secured rights to host the NCAA Women’s Basketball Final Four at the Target Center in 2022. The city, in recent years, has grown into a prolific host of high-profile sporting events with its success hosting the Super Bowl and back-to-back X-Games. Future dates have also been set for Minneapolis oversee additional X-Games competitions and the NCAA Men’s Basketball Final Four in 2019. But no American city has hosted a FIS World Cup event in years. Minneapolis will break that trend dating back to 2001.

“Hosting the Cross Country Ski World Cup is yet another chance to showcase how to do winter right and for our city to shine as we show the world that Minneapolis welcomes everyone with open arms,” said Minneapolis Mayor Jacob Frey in prepared remarks.

An estimated 30,000 spectators are expected to travel to the metropolitan area for the event. Beth Helle of tourism agency Explore Minnesota hopes the World Cup will boost attention to the state’s ski offerings.

“Minnesota boasts more than 2,000 miles of cross-country ski trails, and the sport is integral to our winter tourism industry,” she said in a statement, noting that winter activity makes up 24 percent of tourism expenditures in the state.

Despite the Minneapolis event being a year-and-a-half away, Diggins is savoring the news now as the accomplishment of months of advocating sinks in. “I was really involved at the start and was just really passionate about making this happen,” she says. “More than anything, I want all of these young skiers to experience the World Cup atmosphere, because I never had that growing up.”