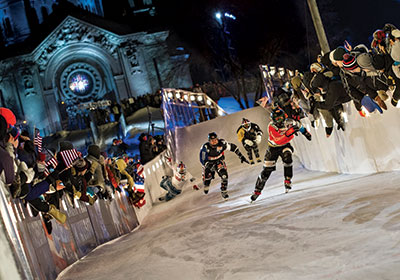 For the last three years, Red Bull’s Crashed Ice event has brought swarms of fans to Cathedral Hill in St. Paul. The spectator count offered by the city has leapt from 80,000 in 2012 to 115,000 last year to 120,000 this year (despite brutally cold temperatures and heavy snow). The touted economic impact— between $10 million and $15 million ($125 per person on average)—is impressive indeed. The process by which the estimate is generated, though, involves lots of estimating and extrapolation.

The spectator count for the Saturday-night event, says Jake Spano, marketing director for the City of St. Paul, is determined in consultation with the police, fire and parks departments. Each takes a rough sampling of a few areas and the city extrapolates from there.

The economic impact calculation is outsourced by the city’s visitors bureau, Visit Saint Paul, to a company called Destination Marketing Association International. It draws on 10 data sources, such as consumer surveys, data management organizations and the U.S. Bureau of Economic Analysis, to compare the event with previous events with similar characteristics.

Visit Saint Paul considers length, type of event and how many “hotel night stays” were contracted by Red Bull—a staggering 2,737 for the production team, media, athletes and sponsors. The DMAI calculator, after also taking into account local factors such as hotel and income tax rates, then builds an impact report.

The calculation measures direct impacts such as attendees’ spending at restaurants and wages of those contracted to work the event, and indirect factors like restaurants hiring more staff for the weekend.

Nearby bars are an obvious beneficiary. Ryan Huseby, general manager at the Happy Gnome, says Crashed Ice brings him more business than any other day of the year: Sales were 20 percent higher than average on the Saturday of the event, he says.

Just down the road, however, W.A. Frost & Co. was less pleased. “We actually saw a slight dip in sales that Saturday. While we had a lot of foot traffic, it was generally people stopping in for a beer or two, so our per-person sales were much lower than average,” says Robert Crew, director of food and beverage operations, who adds that traffic congestion kept regular, better-spending customers away.

In the end, though, Spano says “it has really become a signature event for the city and we hope Red Bull decides to bring [it] back next year.”