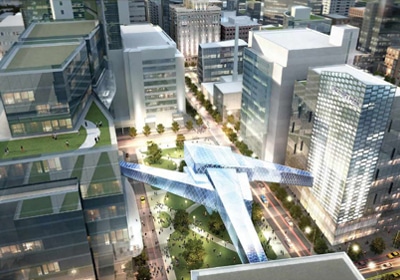 The goal of creating a bio-business industry cluster feeding off Mayo Clinic research as part of Rochester’s ambitious Destination Medical Center effort came into sharper focus last week with the official announcement that Mayo will expand its research facilities in the city by more than 2 million square feet over the next 20 years.

And TCB has learned it’s possible, perhaps likely, that among the first new beneficiaries of the build-out will be three of Mayo’s hottest research operations in fields that are quickly gaining traction among companies and investors: its “transformational centers” of genomics/individualized medicine, regenerative medicine and healthcare economics.

The idea behind the expansion is to lure medtech and biotech companies that may already have close relationships with the clinic through research collaborations, venture capital investments or licensing deals to relocate to Rochester and work side-by-side with Mayo clinicians within gleaming new R&D buildings to be built just south of downtown.

Also, start-ups founded by Mayo researchers themselves and nurtured in the clinic’s own business incubator could have a place to grow once they graduate from the nest, in theory adding to the momentum of building some type of bio-business industry cluster in the city.

While the exact shape of Mayo’s building plans hasn’t been determined, what is known is that they will be centered on a series of clinic-owned employee parking lots a few blocks south of the heart of downtown. This zone has been dubbed “Discovery Square” in the DMC plans. Its centerpiece is a new “urban square” on what is now a Mayo parking lot bounded by 3rd and 4th streets SW, and by 2nd and 3rd avenues SW.

That and several other surface parking lots within a block or two make them likely candidates to host the first new R&D building under the build-out. Mayo itself won’t own the buildings, but will grant ground leases to an outside developer, who in turn will build and own them, then sign Mayo as their key tenants. The clinic has already sent out requests-for-proposals to developers and will be sifting through the responses over the next several months, expecting work on the first building to begin next year.

Non-Mayo companies would make up the remaining tenant rosters, thus allowing close, every-day contact between clinicians and those seeking to commercialize their scientific advances. Thus, a key to understanding what a future biotech industry cluster in Rochester may look like could depend on what kinds of research activity Mayo chooses to move into the new R&D buildings.

When asked if any specific plans had been laid about how Mayo will fill the new buildings, Mayo Clinic Ventures Chairman James Rogers said, “not yet,” but added that individualized medicine and regenerative medicine are being considered – thus signaling those disciplines could form the basis of the city’s bio-business potential.

“(The clinic) doesn’t know exactly yet what will go in there,” Rogers said. “The bottom line is that Mayo will be a tenant in at least the initial building. There will also be space for companies in that building, and the hope is they will be companies with good synergies with researchers and the clinicians housed in the building.

“Regenerative medicine is one potential area that could go in, but nothing’s really set in stone right now.”

Asked further what kind of research activities could benefit most from the expansion, Rogers mentioned Mayo’s three “transformational centers”: The Robert D. and Patricia E. Kern Center for the Science of Health Care Delivery, the Center for Regenerative Medicine, and the Center for Individualized Medicine. It just so happens they’re now “virtual” centers without spaces of their own, and each are at the cutting edges of three of the hottest and most quickly commercializing areas of medical research.

The Kern Center for the Science of Health Care Delivery is focused on the latest research in healthcare management in an era of ballooning costs, such as ways to improve patient outcomes and increase efficiency within healthcare practices and organizations; the Center for Regenerative Medicine is working with companies (located elsewhere in the country) on how to address the severe shortage of transplantable organs by bioengineering new ones from a patient’s own stem cells.

Meanwhile, the Center for Individualized Medicine is helping to generate an explosion in medical and investor interest around the world in the discovery of “biomarkers” for a litany of diseases and conditions such as cancer within the genomes of individual patients.

The Mayo Clinic has an extensive network of financial and research collaboration ties with companies working in these fields, including such start-ups or early-stage companies such as GenomeDX (San Diego), Biostage Inc. (Holliston, Mass.), Cancer Genetics Inc. (Rutherford, N.J.) and Second Genome (San Francisco).

Could the emergence of a first-class bio-business infrastructure with unparalleled access to Mayo researchers influence these kinds of companies to relocate to Rochester? That’s certainly one of the hopes behind the build-out.