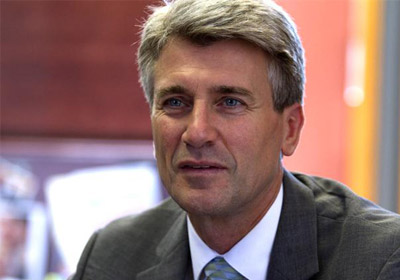 Minneapolis Mayor R.T. Rybak said he wants the 90-day delay in firming up plans for the Southwest Light Rail Line to be a time of intense study of the options.

The key vote, originally scheduled for this week by the Metropolitan Council, was delayed for 90 days on Tuesday by Governor Mark Dayton. The delay is meant to allow more study of alternate routes for freight trains and to assure that the planned shallow tunnels envisioned for part of the route will not harm the water quality in the Minneapolis Chain of Lakes.

The move came after Minneapolis Mayor R.T. Rybak cast the only vote against the project during a meeting of metro officials.

“If we spend 90 days just thinking about stuff, this will be a failure,” said Rybak of the need for clear results. “Light rail lines are like sharks,” he said. “If they don’t move, they die.”

After the delay was announced, Rybak said: “I will not support this with questions about the lakes still outstanding and without being fully convinced that all options have been looked at. If our questions are answered and it’s clear there was an honest look at other options that produced nothing, I will support moving ahead on this.”

For the last five years, Minneapolis has supported light rail at grade level on the narrow strip of land between Cedar Lake and Lake of the Isles known as the Kenilworth Corridor. That support came following a promise to the city by Hennepin County that the corridor’s current freight trains would be moved to a new location.

“The history on this is clear. The county pushed the idea of the Kenilworth Corridor over our objections,” said Rybak, recalling that the project was a tough sell to those living along the route who did not want all of the trains in their neighborhood.

“Those who say that we’re being inflexible forget that we went with someone else’s alignment, built the political support we needed, had the tough conversations, and an area that may not even have a stop was willing to accept 220 trains a day for the greater good of the region,” said Rybak.

One option suggested was to move the freight lines to St. Louis Park and elevate the trains on two-story-high earthen berms.

“About the last thing in the world I would recommend for St. Louis Park are the 20-foot berms through neighborhoods,” said Rybak, who started his journalism career at the St. Louis Park Sun newspaper. “That’s a crazy idea. Take that off the table.”

If the full 90 days are allowed to pass before the delayed vote by the Metropolitan Council, it will be January and a new mayor will have been sworn in.

“I don’t imagine there’s somebody who will sit in this chair who will be easy on this issue,” said Rybak, who does not think his lame-duck status will affect the outcome. He says he will continue to work on this issue as a private citizen. “I’m not going to Oz.”

“The one thing that I absolutely refuse to have any part of would be anything that has a negative impact on the Chain of Lakes,” said Rybak.