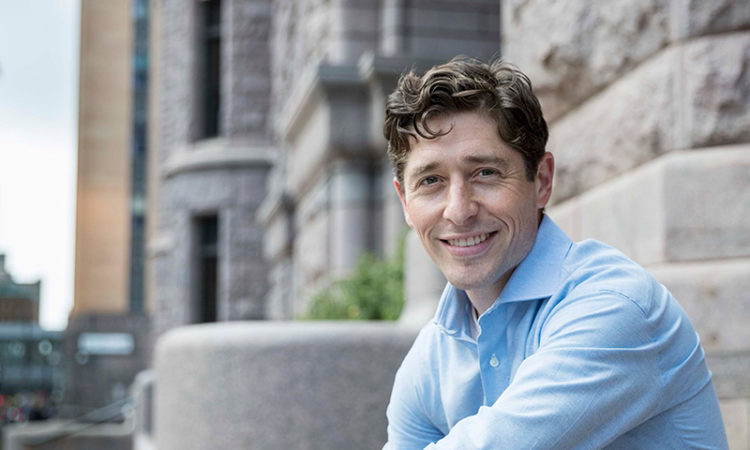 Mayor Frey: ‘You Can’t Talk About One Crisis Without Talking About Another’

You think you want to be mayor of Minneapolis? You probably don’t.

The list of dumpsters currently on fire is long.

First the Covid-19 virus hit, followed by pandemic-related economic fallout. In late May, George Floyd was killed at the hands of Minneapolis police, which set off a wave of social unrest across the city. In the ensuing chaos, some businesses were burned to the ground; many others were looted and severely damaged. And these days, downtown Minneapolis is still a ghost town.

The city’s efforts to invest in rebuilding are hampered because Covid-19 means that it’s getting a lot less money from sources like entertainment, lodging, liquor and sales taxes.

At the same time, crime is up across the city. Being mayor also means that just about every small business operator in town thinks that you are not doing enough to help them, particularly when it comes to police response and public safety concerns. Meanwhile, both the police department and city council members who want to “defund” the police are mad at you.

Mayor Jacob Frey, who confirmed that he plans to run for reelection next year, took some time on Monday afternoon to talk to Twin Cities Business about several front-burner issues facing the city of Minneapolis right now.

TCB: What are you prioritizing right now?

Frey: I think there’s a few key areas that we are prioritizing. First, throughout Covid-19, we promised to ensure that core city services were being delivered with excellence. Then secondly, we’re prioritizing those who were struggling the most. What that means practically is that work is happening in several different areas. Public safety is obviously a top priority and at the forefront. As is economic inclusion as we look to rebuild and transform at the same time. And then the third big one is homelessness, our unhoused community. All of these situations were significant issues before Covid-19, before the killing of George Floyd and the subsequent unrest, but they’re certainly magnified exponentially now.

Q: Small business owners are almost universally critical of City Hall, particularly in regard to public safety. What do you tell those folks?

A: With respect to public safety, my position has remained consistent. I have been in lockstep with Chief [Medaria] Arradondo. I have said that yes, we do need structural change as to how our police department operates. And I have consistently said that we need police and we need law enforcement. I’ve said the exact same thing whether I’m talking to business leaders or 1,000 activists who come to my home to protest. Obviously, I opposed the measures that the city council took to end or abolish or dismantle the police department.

Clearly right now we have seen significant attrition [of police officers] in the last several months. Normally, on an annual basis we see somewhere in the range of 40 to 45 officers retire or resign for one reason or another. This year we’ve seen well over 100. There’s a number of things that we’ve done to account for those metrics. We have shifted several units from within MPD to do more traditional law enforcement work like 911 response and investigation. Specifically, we got rid of the community engagement team as well as the police athletic league and several other units. All of which do good work, but serious times call for serious measures and it was necessary to bring them back to do 911 response and investigation.

Q: Your proposed budget calls for cutting $14.3 million – or 7.4 percent – from the police budget. How does that square with what you just said?

A: I feel like a lot of people have gotten this wrong. We have a citywide hiring freeze. The hiring freeze applies to all departments from CPED [Community Planning and Economic Development] to rec services to police. That hiring freeze accounts for a strong percentage of the savings we hope to see to offset the diminished revenue that we’re getting.

Normally, we anticipate that about 45 percent of our city revenue comes from property taxes. The other 55 percent comes from other sources like entertainment tax or sales and liquor tax, parking revenue, utility fees, that kind of thing. Many of those sources have been almost zeroed out. The losses have been staggering.

Exceptions can be granted to that hiring freeze. And I will grant exceptions for the three new police recruiting classes that are coming in. The numbers that you see as part of the budget are a starting point, but exceptions can and will be granted.

Q: How many prospective officers are in those three recruiting classes?

A: The honest answer is “it depends,” because we don’t know how many of them will pass. I guess normally you can expect somewhere between 30 and 40.

Q: Are you tracking business departures in Uptown, like the Apple store?

A: We are. Importantly here, you can’t talk about one crisis without talking about another. Every conversation I have on this topic, and that’s whether it’s a mom who’s lost her son on the north side or a business owner in Uptown whose employees are concerned about their walk to their car, it’s a constant exercise in heartbreak.

This uptick that we’re seeing is not unique to our city. Most every major city in the entire country [is] experiencing very similar metrics.

A: In terms of crime and business closure. Hard economic times were there at the commencement of Covid-19 and the economic downturn that we’re seeing. We’re doing several things to help wherever we can to allow businesses either to stay open or to put them on ice, so that that pilot light which is our economy can be reignited as soon as we get through.

I can imagine the Apple store is making decisions based on a number of different criteria including traffic — foot traffic along that area, which is obviously greatly diminished. That is the reality of the times in which we’re living right now.

Q: What tools does the city have? You’re not the SBA.

A: We have given out business grants. Those were, for the most part, given to small and micro-businesses especially along some of the corridors that were hit hardest by both Covid-19 and the unrest. We’ve also got a commercial property development fund that we’ve set up; it’s going to have about $5 million for next year. The purpose of that fund is to allow some of the business owners to purchase the underlying real estate allowing them to reap the benefit of the gains from the economy as opposed to being displaced.

We’re obviously watching out for any real estate speculators coming in to purchase these properties at rock bottom prices only to bump the rent and displace some of the business owners and communities that have made these corners wonderful to begin with. That’s happening. That is underway already.

I’m doing constant business meetings with business leaders of some of our larger companies in Minneapolis and small business leaders to make sure that they’re buying into the vision of where we’re going.

This has gotta be an everybody-locks-arms approach. This has gotta be, “We’re all in this together. We’re not moving a muscle. We’re staying in Minneapolis to be part of the solution.” Countless business owners have stepped up to do exactly that.