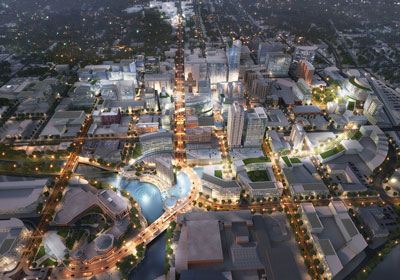 Construction will begin next year on the facilities that Mayo said are only a fraction of its Destination Medical Center expansion plans.
June 18, 2016

Once completed, Mayo touts it will have a “first-of-its-kind urban bioresearch campus.” The new facilities will bring together physicians, researchers, scientists and entrepreneurs to develop products and care services in a variety of specialties, including biotechnology and regenerative medicine.

With plans to break ground next year, Mayo’s announcement is the latest in a series of expansion moves within the city. The effort, dubbed the Destination Medical Center (DMC), involves a 20-year, $6 billion spending plan to transform Rochester into America’s health care capital. The additional money from private investments and $585 million in taxpayer support make DMC the largest public-private partnership in state history.

“Mayo Clinic’s decision…to invest in new bioscience innovation, will encourage additional national and international investment in Rochester,” said Lt. Gov. Tina Smith, who serves as board chair of the DMC project. “It will spur job creation and diversify the economy in Rochester and southeastern Minnesota.”

Smith noted the announcement of the Discovery Square development was “exactly the kind of transformational project we created the DMC to accomplish.”

Last year, Mayo had a research budget of $662 million. That funding led to the start of more than 2,700 human studies and research findings published in about 7,300 peer-reviewed journals.

With the completion of the urban bioresearch campus, Mayo Clinic CEO John Noseworthy believes the organization’s prevalence and innovative prowess will expand even more.

“We’re looking forward to welcoming businesses, medical innovators and researchers from around the world to Discovery Square,” Noseworthy said in prepared remarks. “There is no better way to stimulate innovation than through collaboration, which has been part of the Mayo culture for over 150 years.”