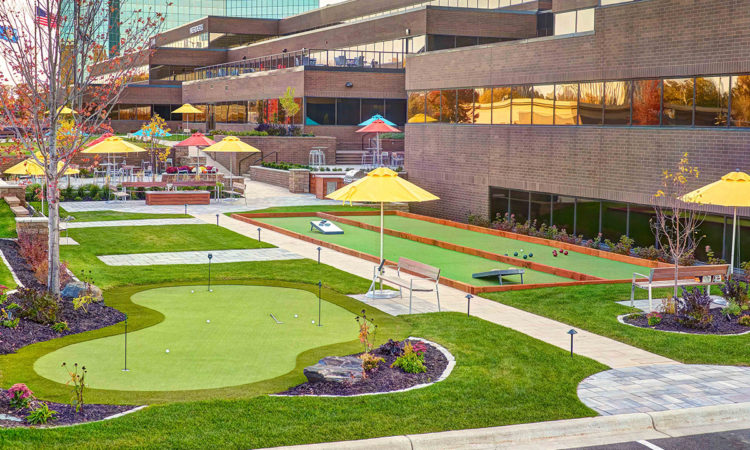 Portico Benefit Services is the latest downtown Minneapolis company that has unveiled plans to move to the suburbs.
By Burl Gilyard
March 31, 2021

Portico Benefit Services has inked a lease to exit downtown Minneapolis. The nonprofit has a deal to relocate to 7700 France in Edina. Portico occupies about 60,000 square feet in RSM Plaza downtown; the company will take 25,000 square feet of space at 7700 France.

“That doesn’t surprise me at all,” said Mike Gelfman, senior vice president with the local office of Toronto-based Colliers International, of the Portico deal. Gelfman focuses on leasing office space in the western and southwestern suburbs.

A Portico representative could not immediately be reached for comment. Portico provides health and retirement benefits for the Evangelical Lutheran Church in America.

Gelfman said that many of the companies shopping for space in the suburbs are currently sitting in downtown Minneapolis.

“At least half if not three quarters of our prospects that are looking in the market are from downtown [Minneapolis],” said Gelfman. He noted that many companies are just starting to search and that looking at options doesn’t necessarily mean that companies will ultimately sign deals to leave downtown.

Gelfman said that Covid is not the biggest factor driving downtown companies to consider the suburbs.

“It’s primarily being driven by the safety concerns for their employees,” said Gelfman. “Downtown, I think, is going to have issues for some years to come. I don’t think this is something that’s going all of a sudden correct itself by 2022.”

Suburban landlords have used some of the downtime during the pandemic to upgrade buildings to make it more attractive for workers to return to the office.

“Many of the buildings in the suburbs that are 20 years old or older have done a lot of common area upgrades. They’re making lounges, more areas for employees to get out of the office, they are putting wi-fi everywhere,” said Gelfman.

7700 France now features such amenities as an outdoor gaming plaza with putt-putt golf, bean bags, and bocce ball. That’s next to an outdoor seating area which includes a fireplace and a grill. The building also offers a tenant lounge and “alternative work areas,” along with a fitness center and several conference rooms.

Jason Butterfield, senior director with Bloomington-based Frauenshuh, handles leasing at 7700 France. He said that construction of the outdoor amenities just wrapped up in fall 2020.

“We started it in the spring when Covid started, we said, ‘You know what? People are never going to want to feel stuck inside again’,” said Butterfield. “We decided to bring a lot of fun outside.”

Butterfield credits those upgrades with helping to land both Nerdery and Portico, a combined 90,000 square feet of leases.

“It helped us significantly,” said Butterfield.

Nerdery, a digital consulting firm, leased 65,000 square feet last year at 7700 France. In that case, the company was relocating from Bloomington.

Last week, news broke that large accounting firm Ernst & Young (EY) became the first office tenant to sign a lease at The Dayton’s Project in downtown Minneapolis. EY is staying downtown, relocating from U.S. Bank Plaza. But the deal to lease 30,536 square of office space only accounts for 3.6 percent of the 850,000 square feet of office space for lease at the overhauled vintage building.

A few weeks ago, Target Corp. announced that it plans to exit its operations at City Center, where it leases 985,000 square feet of space. Target’s headquarters remain downtown but emptying nearly 1 million square feet of downtown office space leaves a big hole to fill. The company noted with its new hybrid work model, it does not need as much space.

Yesterday San Francisco-based Wells Fargo & Co. said that it was hopeful that workers could return to the office by early September. Wells Fargo has a large presence in Minnesota and is among the largest employers in downtown Minneapolis.

Gelfman noted that projections about returning to the office remain a moving target.

“These are written in pencil, not in pen,” said Gelfman.