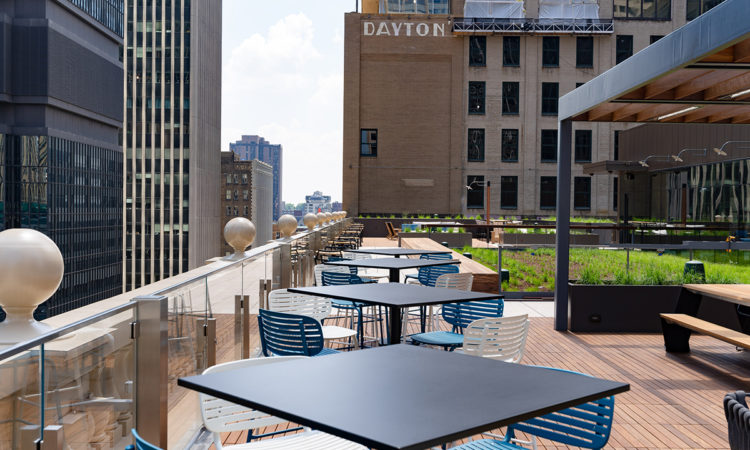 The terrace on the Dayton’s Project. Telos Group LLC

The U.K.-based professional services firm will lease more than 30,000 square feet of office space at the Dayton’s Project.
By Dan Niepow
March 23, 2021

Four years after it was announced, the Dayton’s Project in downtown Minneapolis has finally landed its first office tenant. On Tuesday, the team behind the project announced that professional services firm Ernst & Young LLP will lease 30,536 square feet of office space at the site of the former Dayton’s flagship department store.

Ernst & Young’s space will be on the fifth floor of the 12-story building. The firm, which is based in the U.K., will house about 800 of its Minneapolis employees at the Dayton’s Project. Ernst & Young currently has an office in the U.S. Bank Plaza on S. 6th Street, the same building where TCB parent company MSP Communications previously operated before moving to a space in the North Loop.

The developers behind the Dayton’s Project have long been on the hunt for tenants. They’ve even invested millions of dollars in new amenities to attract prospective companies. Along with a fitness facility and rooftop terrace, the project will include a 45,000-square-foot food hall created by celebrity chef and local restaurateur Andrew Zimmern.

The future of office space in downtown Minneapolis remains an open question. Target Corp.’s recently announced decision to pull out of the City Center — where it had 3,500 employees — adds more uncertainty to the mix. Then there’s the news about a megamerger between between Canadian Pacific and Kansas City Southern, two of North America’s biggest railroads. Canadian Pacific is headquartered in Calgary, Alberta, but has a namesake tower in downtown Minneapolis, which the company long used as its U.S. headquarters. As part of the merger, the combined railroad’s headquarters will be moved to Kansas City, Missouri.

In an interview with the Star Tribune, Canadian Pacific CEO Keith Creel said that the decision to move his company’s U.S. headquarters out of Minneapolis wasn’t related to Target’s decision to pull out of City Center.

In a news release, officials with the Dayton’s Project acknowledged a degree of uncertainty about downtown Minneapolis. But, apparently, they’re still optimistic for the future.

“Minneapolis has faced the same challenges that other cities have,” said Erin Fitzgerald, a principal with Transwestern working on leases for The Dayton’s Project, in the release. “But tenants with vision, like EY US, will lead the charge back to the office, back to downtown. There is no better spot to center the rebirth of Minneapolis than The Dayton’s Project, which has been the heart of the city for over a century.”

Back in 2017, when the Dayton’s Project was first announced, it was billed as a way to revitalize downtown Minneapolis.

Despite lingering uncertainty, there have been some notable positive developments downtown. Deluxe Corp., the formerly Shoreview-based company famous for the “Small Business Revolution” TV show, in September 2020 announced plans to move its headquarters to downtown Minneapolis. And just across the street from the Dayton’s Project, the real estate team behind the IDS Center is working on a $5 million renovation to the decades-old Crystal Court at the base of the skyscraper.

Mike O’Leary, Minneapolis office managing partner for EY, said that the Dayton’s building “elicits fond and nostalgic memories for so many Minnesotans and has historic significance to the entire community and our firm — especially as we commit to continue our over 100-year-old presence in downtown Minneapolis.”