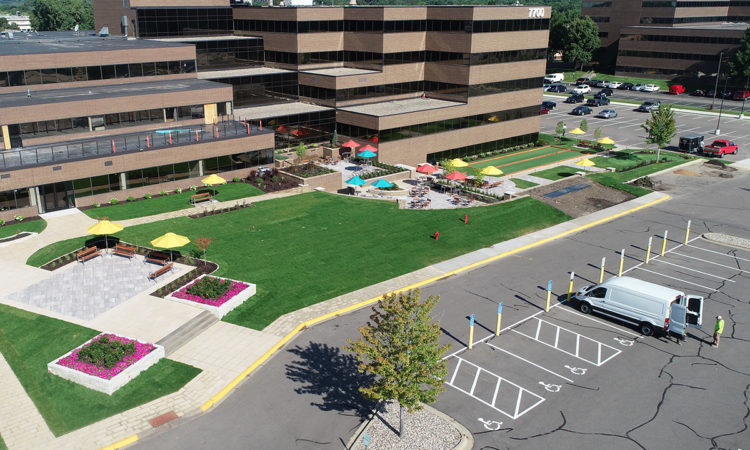 Nerdery is moving from a Bloomington industrial park to this new office space in Edina. Frauenshuh

Digital consultancy Nerdery inked a deal earlier this year for 65,000 square feet of space at 7700 France Avenue in Edina. The move is now imminent. Nerdery will relocate from a Bloomington industrial park to its new space in September.

The deal is the largest office lease signed this year in the Twin Cities office market. Many office tenants currently have plans on hold while a majority of employees continue to work from home for the foreseeable future.

The Minneapolis office of New York-based Newmark Knight Frank represented Nerdery in its search for space.

“We approached the relocation from every possible angle for Nerdery, considering a move to downtown among other areas, but ultimately 7700 France Avenue in Edina was identified as the best option,” said Jim Damiani, executive managing director of NKF’s Minneapolis office in a statement.

In the current Covid climate, many companies aren’t sure what the future of office space is going to look like. Nerdery says it’s taking steps to make the office safe in the new world.

“Because we’re in the early stages of our build-out, we have the flexibility to incorporate real-time solutions that keep our staff safe and socially distanced as we navigate the current pandemic situation. The safety and comfort of our employees is our first priority as we transition to our new office,” said Adrian Slobin, Nerdery’s CEO, in a statement.

Minneapolis-based Studio KKChong designed the buildout of the new space.

7700 France Avenue is owned by Bloomington-based Frauenshuh, which renovated the property in 2016.