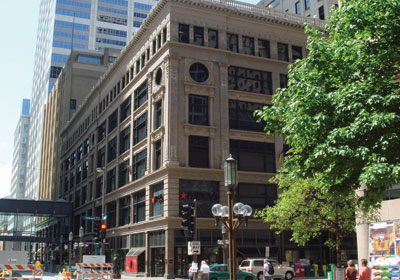 Plans to redevelop in limbo as stakeholders maintain silence.
By Adam Platt
December 11, 2016

Update: City Hall sources tell TCB that Macy’s has told them it intends to announce the sale and closure of the Nicollet Mall store this afternoon (Jan. 4). Asbestos issues remained a sticking point with City Center Partners, so the buyer is believed to be 601W Companies of New York. Read the updated story here.

Cincinnati-based Macy’s Inc. has informed the City of Minneapolis and key downtown stakeholders that it intends to close its flagship store on Nicollet Mall in 2017, and that it has no plans to maintain a retail presence there, according to multiple sources who requested anonymity.

These sources say they have been asked to maintain a veil of silence until the company is ready to announce its plans, lest a public announcement accelerate the closing or imperil redevelopment of the site. City officials believe Macy’s is close to a sale agreement to a developer, but asbestos-removal concerns have delayed it.

Councilmember Lisa Goodman, who represents the southern half of downtown, including Macy’s, would not confirm the closing and referred questions to the mayor’s office, but said that shuttering the store would be a blow that downtown would not easily absorb: “I believe Macy’s is critically important to a vital retail environment downtown.”

Other City Council members who have reportedly been briefed on Macy’s plans also referred inquiries to Mayor Hodges’ office, as did the city’s Planning and Economic Development Department and Minneapolis Downtown Council president Steve Cramer.

Hodges released the following statement in response to an inquiry from TCB in November: “I have spoken with Macy’s about the future of the historic Nicollet Mall store. I have told them that, like so many people, I love this fixture of our downtown and would like it to remain there. I am also very hopeful that if Macy’s makes another choice, that iconic property on a transformed Nicollet Mall will prove irresistible to exciting redevelopment in our fast-growing, vibrant downtown.”

Macy’s representative Andrea Schwartz declined to comment on the status of the downtown store.

In August, Macy’s said it planned to soon close 100 underperforming stores (of 728 stores total), but did not specify most of them. Twin Cities Business reported recently that the downtown Minneapolis store is not among the chain’s 150 top-performing stores; local stores on that list are at Mall of America, Ridgedale and Southdale.

Sources close to the situation say Macy’s told the city that it intends to publicly announce the closing after the holiday selling season, with a planned end of operations in the first half of next year. They also said that Macy’s executives shared with key downtown stakeholders that the Minneapolis flagship, opened in 1902, is not profitable. Some sources suggest the store may not have been profitable for the entire decade Macy’s has operated it. (Because the store includes a large parking ramp and floors of unoccupied retail/office space, it can be difficult to parse its economic viability.)

Sources within the group of downtown stakeholders briefed on Macy’s plans say that the company has most recently been negotiating with City Center Realty Partners, a San Francisco-based real estate developer and property manager with offices in Minneapolis. (City Center did not return calls for comment.) City Center’s purchase of the building has reportedly foundered as it negotiates with Macy’s over asbestos removal.

City Center is believed to be contemplating a redevelopment that would include retail at street-level and either office or residential space above, though there is skepticism among experts in the development community that the building’s massive floors are suitable for residential.

Macy’s has acknowledged for several years that it is looking for creative real estate solutions for its many downtown stores. Media reports have tied various sites to multiple developers, although many of those plans have not borne fruit. Last month, however, Macy’s announced an agreement with Toronto-based Brookfield Asset Management to create a real estate development plan for 50 Macy’s-owned stores.

Bloomberg reported then that Macy’s has been under pressure from activist investor Starboard Value LP to monetize its real estate portfolio. Macy’s to date has sold (for redevelopment) flagship downtown stores in Brooklyn, Honolulu, Houston, Pittsburgh, St. Paul, Seattle, and Spokane. It retains a presence in only the Brooklyn and Seattle stores. Macy’s recently announced the closing of its downtown Portland, Ore., store early next year.

(Non-downtown stores in the region are hardly safe. Macy’s has announced the impending closure of its store in Eau Claire, Wisconsin; and Morningstar reports that the Macy’s at Crossroads Center in St. Cloud is among the bottom ten in the chain in sales per square foot.)

Councilmember Jacob Frey, who represents the northern half of downtown but not the Macy’s block, wrote an op-ed article in the Star Tribune in October, days after Macy’s notified city officials, suggesting that department stores were not the future of downtown retail and it was time for the city to think differently about the block. Frey declined to comment for this story.

Macy’s flagship here was once the headquarters of Dayton Hudson Corp., which, in addition to Dayton’s, Hudson’s and Marshall Field department stores—owned Target Stores, Mervyn’s and B. Dalton Bookseller. The store’s upper floors, once filled with buyers and management, are now mostly empty. Retail operations at the store have also been scaled back; Dayton’s once offered furniture, carpeting, appliances, books, electronics and high-fashion women’s couture.

Because Macy’s will not confirm the closing, it is impossible to determine the fate of the store’s signature auditorium events, such as the spring flower show and (much-downsized) Christmas celebrations, or its 12th-floor restaurants and high-traffic basement food hall.