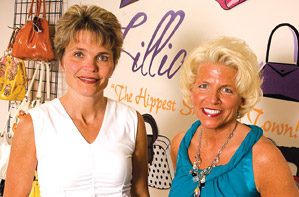 And its stores are open only four days a month. How does that work?
By TCB Staff
November 11, 2009

When you first meet Cindy Deuser, she greets you with a big smile and an even bigger bear hug. She brings this same energy to everything she does at Lillians, the low-price, high-style fashion accessories franchiser she founded with her sister, Sue Olmscheid.

Deuser’s auctioneer-fast talk can be heard over a portable speaker at Lillians in Buffalo, Minnesota—the first and largest of the stores, still owned by Deuser and Olmscheid. Each Lillians is open just four days a month in a frenetic event that has attracted a diehard clientele. They scramble to grab this month’s supply of handbags, wallets, scarves, and other fashion items—all in limited supply. Each store’s small inventory of 500 to 1,000 handbags changes each month, with almost all items selling out during the four-day sale.

After each sale, the store closes, and doesn’t reopen until the next month. Says Deuser, “If we were open all day, every day, all month long, would you have a sense of urgency?”

The event nature of these sales was borne out of similar antiques sales that Deuser and Olmscheid attended in Buffalo, where they grew up. At Lillians, Olmscheid handles the business side; Deuser the fashion end. After opening their first store in 2005, they soon were approached by customers interested in opening stores on the same model. Lillians now has 29 franchised outposts, including four in the Twin Cities. Eight new locations have opened this year.

Opening a store requires a one-time franchise fee of $25,000 plus an ongoing 7.5 percent royalty. All in, Deuser says, a franchisee can pay the initial fee, lease and build out a storefront, and get the first month’s merchandise for $40,000. It’s the perfect gig for empty-nesters and stay-at-home moms, she adds, since it doesn’t require a full-time commitment. Still, franchisees are required to personally manage their stores.

As Lillians has grown, Deuser and Olmscheid have been able to build their vendor relationships and negotiate better prices, which keeps margins high. Deuser says it takes franchisees less than the typical five years a new store needs to turn a profit.

“We don’t have back stock, we don’t carry $300 bags,” she says. So in order to help build customer loyalty, Lillians gives new customers a free $20 stamp on a punch card that rewards them with a free handbag after 10 punches.