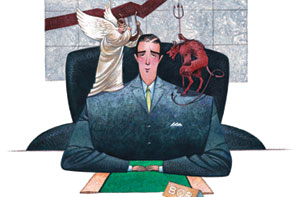 High profile executives at CitiBank and Countrywide Financial Corporation have earned salaries, severance, or perks that investors and the media say are out of line with their company’s performance. Earlier this year, CitiBank officials increased perks when a $500,000 limit on salaries was imposed on the company as part of the federal stimulus money it received. Angelo Mozilo, former CEO of Countrywide Financial, received $115 million in severance pay when he left his troubled company, which was later purchased by Bank of America.

Add to that the government bailout money distributed as part of the Temporary Asset Relief Program to aid failing firms, and shareholder outrage has risen to a fever pitch.

But the times are changing. The Securities and Exchange Commission (SEC) charged Bank of America in August with misleading investors in regards to billion-dollar bonuses paid to Merrill Lynch & Company executives at the time of its acquisition of the firm. According to the SEC, Bank of America agreed to settle the charges and pay a penalty of $33 million.

Claims of outsized executive compensation packages have lead to legislators grilling executives about bonuses. In August, a U.S. House legislative panel voted for the so-called say-on-pay measures as part of the Shareholders Bill of Rights which allows shareholders of public companies to vote on the amount and kind of compensation top executives receive. The measures were introduced in July by U.S. Representative Barney Frank of Massachusetts.

Now, boards of directors, compensation committees, and corporate counsel find themselves in the eye of the executive compensation storm. Compensation experts in Minnesota say the state’s companies are avoiding the compensation kerfuffle by closely examining their policies and incrementally adjusting packages as needed.

Creating compensation packages that incent executives to create shareholder value and long-term sustainability for companies is more art than science. It’s difficult to set performance benchmarks when market volatility reigns, as it has during the last year.

Executive base salaries remain largely unchanged, however executive bonuses and perks are now being more closely linked to executive and company performance than ever before. The hot topic in compensation committee meetings these days is pay for performance. Companies have moved away from annual bonuses and toward rewarding long-term success, says Bob Rosenbaum, partner in charge in the Minneapolis law firm of Dorsey & Whitney.

Experts suggest keeping compensation packages simple. “I typically recommend that a company not have any more than three or four key metrics [tied to executive pay], otherwise it gets too confusing,” says Mark Sheffert, CEO of Manchester Companies, a management advisory services firm in Minneapolis. “I’ve seen executive compensation plans that have had as many as 32 metrics in them. I didn’t even understand the plan!” A complicated compensation plan is not attractive to CEOs and makes it difficult to track progress.

“If you make compensation so complicated, and you tie so many bells and whistles and restrictions on it, what you’ve really done is failed to . . . incentivize management to go out there and grow the business,” says Amy Seidel, partner in the corporate practice area at Faegre & Benson, a law firm in Minneapolis.

Sheffert says that compensation plans should have concrete, objective goals—such as achieving 1 or 2 percent more market share each year for three years—instead of subjective goals, such as developing managers. Measuring profit, revenues, and earnings before interest, taxes, depreciation, and amortization (EBITDA), are other ways companies are defining their executive’s performance.

Stock options are changing in the face of a potentially volatile market. “If you’re granting stock options, traditionally companies will do that once per year,” says Ryan Urness, general counsel for Navarre Corporation, a publisher and distributor of home entertainment software based in New Hope. “That’s the one day to set the base price of the option. [Some companies are now] moving away from one-time to a quarterly or monthly plan.” Having multiple points at which an option’s base price can be set provides a kind of cost averaging of the price of the stock, taking some of the volatility out of the stock options. Urness says this helps companies attract executive talent even when their stock price is up and down.

The Short and Long of It

New compensation strategies are encouraging executives to take a longer view. “The longer-term incentives tend to be more equity type forms of compensation—either stock options or stock grants,” Sheffert says. “So basically what they’re trying to do is make sure the chief executives’ interests are well aligned with the shareholders. For the short-term bonus part of it, [some firms will] use cash, or it will be a split between cash and stock.”

Restricted stock awards that vest over a period of time are becoming more popular forms of compensation, according to Seidel. Also, cliff vesting, where an executive is vested completely only at the end of a specified time period, is gaining in popularity. She sees this form of compensation as a good retention tool, especially for companies that haven’t paid a bonus in a year or two.

Urness says that he sees small- and micro-cap public companies with some volatility in share price using stock options instead of restricted shares. Restricted shares are “a nice vehicle if you have a stable share price, because people don’t feel like they’re missing out on the upside,” he says. Restricted shares are paid to the holder as long as he or she has completed a vesting period—based on time or performance benchmarks. Unlike stock-option compensation, in which executives are locked into a preset price for a given number of shares, restricted stock value rises and falls with the stock price.

Perks and benefits are changing, too. First class travel, a company car, club memberships, and life insurance are being cut in response to a difficult market and shareholder sensitivity to perks that appear to be too lavish. “When the SEC changed disclosure rules on perks about three years ago, that’s when you really started to see companies seriously rethinking their programs and cutting back on perks,” Rosenbaum says. That trend has accelerated lately. He’s heard of companies providing lump sums of money for executives to use as they see fit instead of providing a club membership, for example.

However, others are seeing just the opposite. According to Sheffert, some companies have increased the benefits and perks granted to executives as a way to offset decreased base salaries. “That’s the way boards are trying to manage,” he says.

Clawback clauses are becoming more common in executive contracts, especially at publicly held companies, according to John Stout, a partner and chair of the corporate governance and investigations group at Minneapolis-based law firm Fredrikson & Byron. These clauses require executives to give back compensation and bonuses that are earned by committing fraud or other misconduct that is detrimental to the company. In July, the SEC asked a court to order the former chief executive officer of CSK Auto Corporation, a Phoenix-based auto parts retailer, to reimburse the company and its shareholders more than $4 million that he received in bonuses and stock sale profits while CSK was violating the Sarbanes-Oxley Act.

Seidel has seen more companies implement clawback policies. Corporate counsel at many firms are wrestling with creating enforceable policies. Seidel says questions about the enforceability of clawbacks include: How far down in organization’s management ranks should clawbacks go? Should they apply to cash bonuses and equity awards? Should clawbacks apply only to new awards going forward or to outstanding awards as well?

Recently, board obligations have been highlighted in a breach of fiduciary duty lawsuit against the Disney company’s board of directors. Executives and board members at all public companies have fiduciary duty and must act with the shareholders’ and company’s best interests in mind. Fiduciary duty includes the duty to be informed (know the market, competition, company strategy, know enough to make intelligent decisions), duty of care (do everything you can to help the company), and duty of loyalty. Board members must disclose conflicts of interest.

The Disney shareholders’ suit against the company’s board of directors claimed that the board didn’t represent their best interests by allowing CEO Michael Eisner to grant Michael Ovitz $130 million in severance pay after just 14 months as company president. But a Delaware court found that the board acted in good faith, going through a reasonable decision-making and due diligence process in reaching its decision to pay Ovitz the severance.

If enacted, the Shareholder Bill of Rights legislation would allow shareholders to vote against company directors who sit on the compensation committee. However, since it’s just an advisory vote, a board doesn’t have to act on it.

“Some companies would argue you don’t really need say on pay because you already have it,” Seidel says. “Shareholders can always vote against directors that sit on the comp committee. That’s one way to express dissatisfaction of compensation.”

While the say-on-pay legislation passed the House in July, Stout says he’s interested to know exactly what shareholders will be able to vote on if the legislation is enacted. “Are you asking them to approve pay structure and analysis? The proxy material? Are they specifically approving the compensation of the CEO?” he wonders.

Sheffert believes the proposed legislation is an overreaction. “At the end of the day, you can’t legislate [against] ignorance and greed,” he says. He’s also concerned the bill will make it difficult for companies to compete in a global environment.

Despite the harsh backdrop of compensation and bonus scandals, companies are still committed to making incentive compensation work, Seidel says. Taking steps as simple as awarding bonuses biannually instead of annually can incent executives to work to make their company’s long-term performance sustainable. And as companies diversify their compensation structures, they’ll benefit by not putting all the incentive eggs in one basket.

This article was published originally as “Good Compensation Counsel” in the November 2009 issue of Twin Cities Business, page 55.