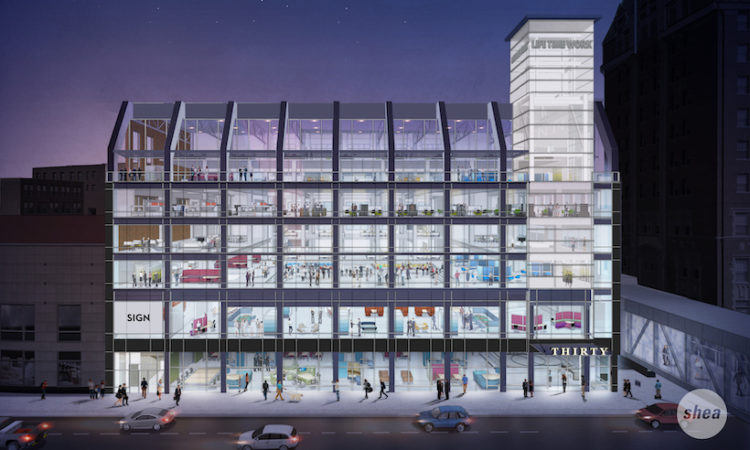 Life Time Work will occupy the top three floors of the Thirty office development in the former YMCA building.
By Allison Kaplan
March 12, 2020

Life Time will open its third Twin Cities co-working space this fall in the former YMCA building in downtown Minneapolis.

The brick exterior of the 125,000-square-foot YMCA building is being stripped away to reveal an all-glass exterior, setting the stage for what developer Ned Abdul has described as a “Google-like atmosphere” for tech companies and startups. With its 30-foot-high unobstructed exterior glass walls on the top floors, the co-working space will offer sweeping views of the western suburbs. Life Time Work president James O’Reilly called it an “architecturally significant property…It’s the perfect flagship location in our home market.”

The announcement comes on a day when many downtown workers are preparing to work from home due to concerns about the rapid spread of COVID-19, but Life Time is optimistic about the future of co-working. The company did not reveal current occupancy numbers but said it is “very pleased” with the performance of Life Time Work in St. Louis Park and Edina, which was 65 percent leased when it opened last fall. In addition to downtown Minneapolis, five other locations are planned for 2020 in New Jersey, Florida, Dallas and Houston, where Life Time Work already has a location, along with one in Philadelphia.

The Twin Cities now has approximately 1.2 million-square-feet of co-working space—triple the amount in 2014.  Sixty percent of it is concentrated in downtown Minneapolis.

A preview center will open in May.