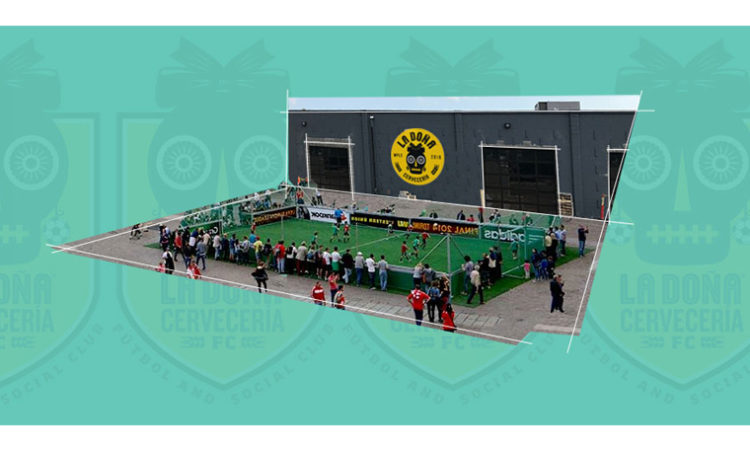 La Doña Cerveceria, located in the Harrison neighborhood of Minneapolis, will include a taproom, art gallery and patio soccer field for a 3 vs. 3 league.
By Amanda Ostuni
July 17, 2018

The Twin Cities is awash with breweries and another will soon join the local market. The latest entry to be announced: La DoÃ±a Cerveceria, coming to the Harrison neighborhood of Minneapolis later this summer.

La DoÃ±a Cerveceria, located at 241 Fremont Avenue N, will be a Latino-influenced brewery featuring a 1,500-square-foot soccer field on the patio beside its taproom. The soccer field will act as the home for a 3 vs. 3 co-ed competitive and casual soccer league dubbed La DoÃ±a’s FÃºtbol and Social Club.

While La DoÃ±a’s scheduled opening times closely to the end of the FIFA World Cup, full-sized 11 vs. 11 player games likely won’t take place at the brewery. A regulation-sized field averages around 50,000 square feet—more than 30 times the size of La DoÃ±a’s field.

La DoÃ±a Cerveceria will boast a 10,000-square-foot warehouse, according to the Pioneer Press, containing a taproom, event area, and an art gallery showcasing works of local creators. Pieces exhibited will evoke Latin culture and beer themes.

“The large patio space for the soccer field is one of the primary reasons we settled on this location and it’s exciting to see these aspects of our project finally become tangible,” said Sergio Manancero, La DoÃ±a’s founder, in a statement.

Manancero, a former Marine and son of Uruguayan immigrants, launched his brand at the Lake Street Taco Tour in 2016 and continued its operation by hand-delivering beer in a van while working toward a Sociology degree at the University of Minnesota.

From La DoÃ±a’s new facility, Manancero plans to produce and serve beers on-site, deliver brews in kegs and bottles to area establishments, and partner with local restaurateurs to offer dishes well-paired with his beers.

La DoÃ±a Cerveceria is currently hiring, and registration is open for those interested in La DoÃ±a’s FÃºtbol and Social Club, as well as for any businesses interested in advertisement partnerships for the soccer field or artists seeking exhibition space in the gallery.