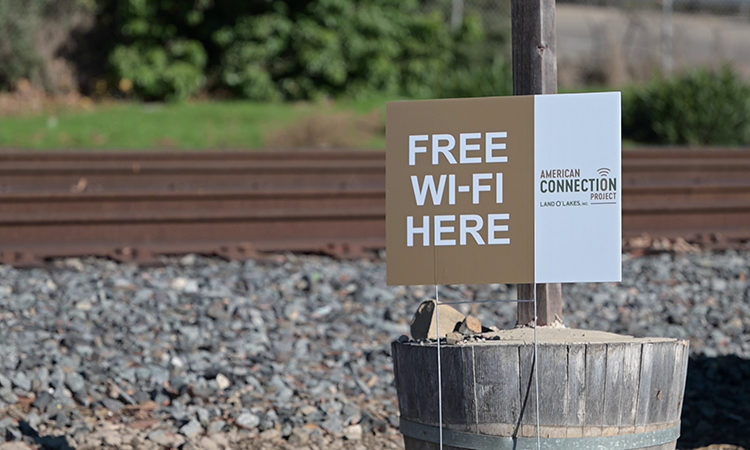 The cooperative teams with businesses and nonprofits to create an American Connection Corps of young advocates.
By Liz Fedor
April 27, 2021

Ford, president and CEO of the agricultural cooperative, has spearheaded a national coalition’s efforts to close the digital divide, which places many farm communities at a disadvantage to their urban counterparts for delivering education and health care services and growing their local economies.

Later this year, 50 young adults will be selected as fellows for the American Connection Corps, and the fellows will focus on improving broadband connectivity and work on community capacity-building projects.

“Millions of families are operating day-to-day with a lack of basic infrastructure—adequate broadband access—that has become a necessity in today’s world and, frankly, a fundamental right,” Ford said Tuesday in a written statement. “Action cannot wait. Through our years-long work on broadband advocacy and conversations with our farmers, our customers and so many others, we’ve seen and heard firsthand how critical digital infrastructure is to the success of communities and businesses across America. From everyday life to prospering in a global economy, investing and focusing on this issue now will pay dividends.”

In a late 2020 interview, Ford told Twin Cities Business that she was advocating for a $100 billion national investment to increase broadband access in rural areas. She had been talking to Democrats and Republicans in Congress to urge them to support spending on broadband infrastructure.

When President Biden unveiled his proposed American Jobs Plan in March, it contained $100 billion for broadband. “More than 30 million Americans live in areas where there is no broadband infrastructure that provides minimally acceptable speeds,” according to a White House briefing document. Biden pledged to push for broadband infrastructure that would provide “100 percent coverage” in the United States. Congress and the administration are now debating what should be included in the huge infrastructure package and what level of spending could muster support in the U.S. House and Senate.

“Broadband internet is the new electricity,” the Biden administration document said, likening expenditures for broadband infrastructure to the 1936 Rural Electrification Act that brought electricity to rural homes and farms. The administration noted that many students struggled to learn remotely during the pandemic because they didn’t have access to high-speed internet service.

Land O’Lakes stepped forward early in the pandemic to provide free Wi-Fi service to help students in rural areas gain access to internet service from their family vehicles. Land O’Lakes enlisted other companies in that effort, and in 2020, free Wi-Fi was being offered in about 2,300 U.S. locations.

Land O’Lakes initiated formation of the American Connection Broadband Coalition, which now consists of more than 150 major companies and trade associations. It is seeking at least $80 billion in federal funding for broadband infrastructure.

The new fellowship program is an outgrowth of the work Land O’Lakes has been doing with the broadband coalition. Lead for America, a Kansas-based nonprofit that develops young civic leaders, will select, train and place the American Connection Corps fellows, including in Minnesota. Applications for the paid, two-year fellowships are being accepted through May 15. Those selected for fellowships will be based out of local governments, nonprofits and community foundations.

One of the lead funders of the fellowship program is Heartland Forward, a nonprofit tied to the Walton family that founded Walmart. Based in Bentonville, Ark., where Walmart is headquartered, the Walton Family Foundation supported the creation of Heartland Forward in 2019 to support middle America.

In a written statement, the Walton Family Foundation defined Heartland Forward as “a think and do tank whose mission is to improve economic performance in the center of the United States by advocating fact-based solutions to foster job creation, knowledge-based and inclusive growth and improved health status.”

Angie Cooper, a former longtime Walmart employee and Heartland Forward leader, hailed the new American Connection Corps initiative. “We are excited to put true grassroots—person-to-person outreach—in communities across the heartland to connect their residents to high-speed internet and ensure everyone can enjoy full access to essential online services,” Cooper said.

Land O’Lakes, Lead for America and Heartland Forward are aligned in promoting the expansion of broadband in rural areas, which lack easy access to high-speed internet service that is common in major metro areas in the United States.

Several businesses and not-for-profit organizations are financially supporting the fellowship program, including Mayo Clinic, CHS Inc., CentraCare and the University of Minnesota.