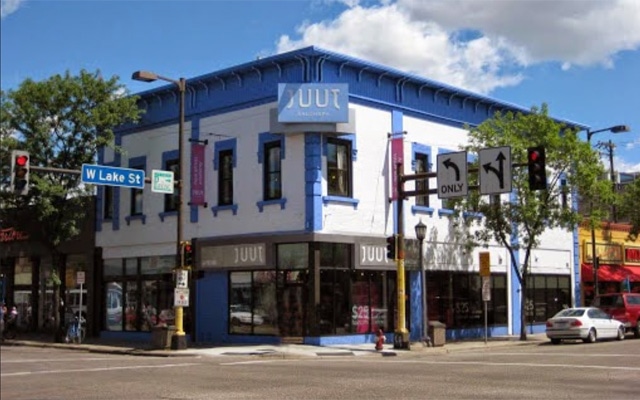 After 35 years at Lake and Hennepin in Minneapolis, Juut’s owner says the escalation of crime and violence has become too challenging.
By Allison Kaplan
June 14, 2021

The June 3 shooting at an Uptown parking garage was the final straw for Juut Salonspa owner David Wagner. After 35 years of anchoring the northeast corner of Lake and Hennepin, Juut’s Uptown location is closing. Wagner, who opened his very first salon in Uptown in 1986, cited the “continued escalation of crime and violence in our neighborhood.”

“It’s tough,” Wagner said in an interview Sunday. “I am such an optimist. But the past few years in Uptown have been the most challenging, and that was pre-George Floyd and pre-Covid. Then everything seemed to escalate, including the recent police shooting, which has the neighborhood shaken.”

That recent shooting took place atop the parking ramp adjacent to Seven Points (formerly Calhoun Square). A U.S. Marshals Service task force opened fire and killed Winston Smith while attempting to arrest him for illegal possession of a firearm. The task force included officers from six agencies; Minneapolis police were not involved.

Looting, street racing, shootings—Uptown has been a frequent target of crime and social unrest since the May 2020 murder of George Floyd. Already grappling with a retail exodus prior to last year, the pandemic exacerbated the problem. Many buildings in the heart of the long-desirable urban business district remain boarded up.

“We bought all of our employees key ring alarms because of the issues,” Wagner said. “The shootings last year, and crime increasing in general in the neighborhood had us concerned…I would be heartbroken if any of our team or clients got hurt.”

Still, Wagner said Juut’s Uptown business in recent weeks had been picking up as Covid-19 restrictions were lifted and vaccinated customers felt more comfortable coming in. Several stylists relocated to Uptown when Juut closed its Gaviidae Center salon in October due to a lack of downtown Minneapolis traffic. But following the parking ramp shooting, Wagner said, “we have seen a lot of cancellations due to the unpredictability of the area.”

Few current Uptown business owners can claim a tenure as long as Wagner’s. He opened his first salon three doors down from Juut’s current location in 1986.  In 1989, he merged with Horst Salons, from Aveda founder Horst Rechelbacher, and opened the first Aveda Esthetique and Horst Salon at the corner of Lake and Hennepin. Ten years later, in 1999, Wagner renamed it Juut Salonspas. He’s been leasing the corner space at 2947 Hennepin Avenue South the entire time.

“We are very proud to have created beauty in Uptown for so many years,” Wagner said in a social media post Sunday. “We loved being part of the daily dynamic that an urban location provides. However, it has become more and more evident that Uptown continues to struggle with store closings, social unrest, crime, and street closures.”

Juut is offering its Uptown staff positions at its remaining Twin Cities locations in Edina, Roseville, St. Paul, Wayzata, and Woodbury. Wagner said employees were given a week off with pay to make the transition.