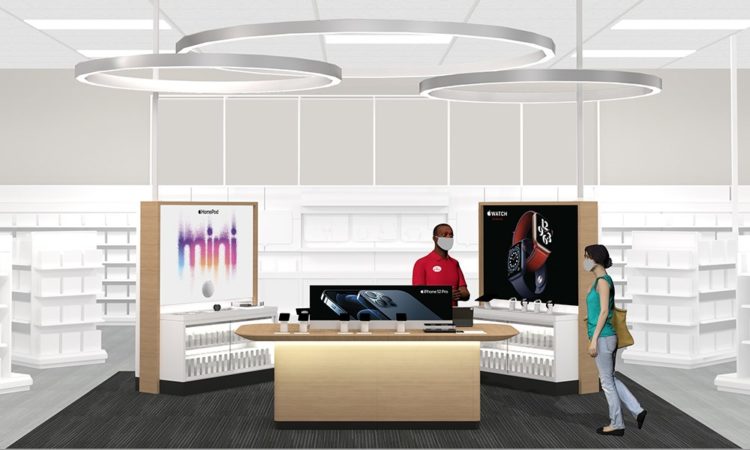 The micro stores will initially appear at 17 Target locations, including one in Monticello. Target Corp.

Only Minnesota location to be in Monticello.
By Burl Gilyard
February 25, 2021

Minneapolis-based Target Corp. on Thursday unveiled plans for new Apple micro stores in a select number of locations. For starters, the “enhanced Apple shopping experience” is being rolled out soon in 17 Target stores. More locations will be added by the end of the fall.

According to Target “the dedicated space features new lighting fixtures and displays for iPhone, iPad, Apple Watch, AirPods, HomePod, Apple TV, and other Apple accessories.” Target’s own tech consultants will get specialized training from Apple. Target and Apple collaborated on the new spaces. Target’s online store will also offer an “extended assortment” of Apple products.

“Apple products are popular with Target’s guests, and this new, dedicated shopping experience offers enhanced service and expanded offerings, building on our strength as a go-to destination for electronics,” said Christina Hennington, executive vice president and chief growth officer at Target, in a statement. “This new model was created with Target’s guests in mind, and we’ll continue to learn and enhance the experience through future rollouts later this year.”

Despite the hoopla, the new Apple spaces are being rolled out in less than 1 percent of Target’s stores. At the end of its third quarter – October 31, 2020 – Target had a total of 1,897 stores across the U.S.

The only Minnesota location slated for the expanded Apple presence is Monticello, a small town approximately 40 miles northwest of Minneapolis. Five of the 17 locations are in Texas; three are in Florida.

Target has not historically had a strong presence in the electronics market. Electronics and computer gear are not among the retailer’s five primary product categories: apparel and accessories, beauty and household essentials, food and beverage, hardlines and home furnishings and décor. Electronics is counted among “hardlines” along with video game hardware, software, toys, entertainment, sporting goods, and luggage.

But Apple is known for its sharp product design. Target’s “Design for All” principle is a key component of its retail brand.

Tech giant Apple has four Apple Stores in the Twin Cities area, all located within large regional malls: at the Mall of America in Bloomington, Southdale Center in Edina, Ridgedale in Minnetonka, and Rosedale Center in Roseville.

Until recently Apple had a standalone store in the Uptown area of south Minneapolis. That location sustained heavy damage during the social unrest in May 2020. The store never reopened. Apple announced in October that the closure would be permanent.