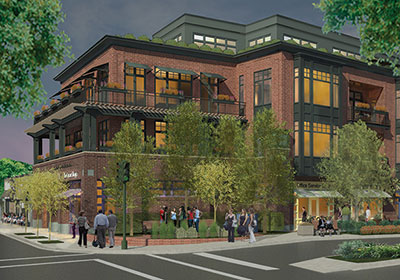 Is Third Time The Charm For Linden Crossing?

Early this year, the long-delayed and exceptionally controversial 19-unit Linden Crossing condominium project in downtown Linden Hills ran aground for the last time, when an investor in developer Mark Dwyer’s project was unable to perform, and the site was sold out from under Dwyer.

A consortium including developer Clark Gassen ended up paying $1.68 million for the land and is planning a 29-unit rental apartment building there. (Gassen previously converted an apartment building at 44th and Upton to condos, so it will not be his first project in the neighborhood.)

Perhaps surprisingly, Dwyer’s retreat is only partial. “It was a process I thought would take 18 months and took four years,” he notes, explaining the need to wait out furious neighborhood opposition and a recession.

He insists Linden Hills would have been better off with new condos than apartments. “We know from experience there’s demand for condos in Linden Hills and all over southwest Minneapolis. The area needs new owner-occupied housing.”

Dwyer says he is “far from whole,” admitting that he lost more than time on the project. But the first-time developer adds he “learned a lot.” The Linden Hills resident says he is not done, but is instead scouring his corner of the city for the right venue to get back to the drawing board.