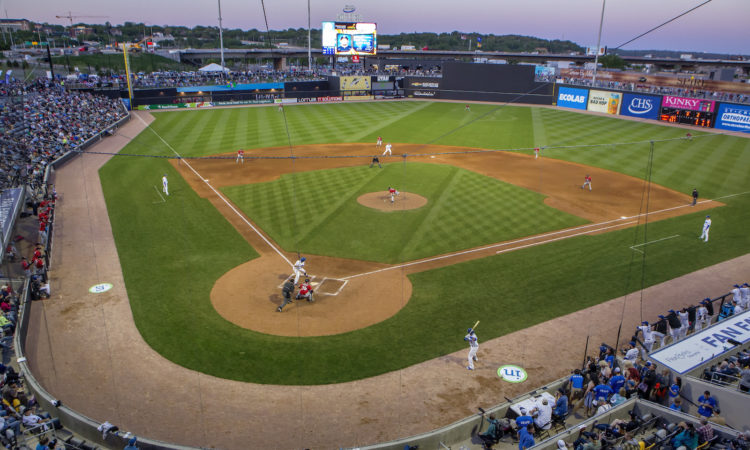 Many communities were in danger of losing their Major League farm clubs. But the plan also raised the possibility of the irreverent and independent St. Paul Saints playing inside of the Major League tent. For five consecutive years, the St. Paul Saints drew more fans as an independent league team than many AAA baseball teams across the United States.

Fans streamed to CHS Field after the new ballpark opened downtown in 2015 and the Saints capped off their financial success in 2019 by winning the American Association league championship. The Saints averaged more than 8,000 fans per game in a stadium that seats 7,210.

But Covid-19 and Major League Baseball’s realignment plans upended the Saints 28-year-run as an organization that thrived outside of affiliated baseball. On December 9, the Minnesota Twins and the Saints announced that the Saints would become the Twins Triple-A affiliate.

In a recent interview, Marv Goldklang, the Saints principal owner, talked about how the Saints-Twins deal came together, the effect of the pandemic on all of his clubs, his ideas about growing the game of baseball, and what the Saints are likely to become in 2021 and beyond.

Goldklang has been a pioneer in independent baseball. He helped launch the Northern League in 1993 with founder Miles Wolff and other enterprising baseball people. The Saints became a fan favorite in the Northern League, and later in the American Association.

MLB leaders clearly were aware of the Saints success, which prompted them to include the independent club in their 2019 draft document of a realigned affiliate system. “That was the first time that we saw our name associated with the Twins as a Triple A affiliate,” Goldklang recalled. “That came completely out of left field. There had been absolutely no prior communication at any level with Major League Baseball, the Twins or anyone else.”

For many months, the concept of the Saints becoming a Triple A club was in suspended animation. But Goldklang, who early in his career practiced law at a major New York law firm, recognized the baseball world would be making big changes in 2020.

Major League Baseball wanted to reduce its costs for player development by shrinking the number of Minor League teams, and it wanted affiliate teams to play in closer proximity to their Major League parents.

While fans and sportswriters speculated about what would become of the Saints, Goldklang kept mum publicly. But he privately started talking to two people in the spring of this year—Dave St. Peter, president and CEO of the Minnesota Twins, and Jim Pohlad, executive chair of the Twins. The Pohlad family has owned the team since 1984.

“The substantive discussions with the Twins, when people started thinking about this more seriously, probably started around the time the Twins approached us with a request to use CHS Field as their alternate site,” Goldklang said. During the shortened MLB season, a cadre of Twins taxi squad players used CHS Field, which is just 10.6 miles from the Twins home at Target Field in Minneapolis.

“Their experience using CHS Field helped to fuel those discussions,” he said. “The Twins had a very, very positive experience, and obviously the geography was great for the Twins.”

CHS Field has won architectural and baseball industry awards, and the Saints’ creative promotions have pushed game attendance to the 9,000 to 10,000 range on multiple occasions.

Despite the logic of a Twins-Saints pairing, both sides wanted to conduct their business discussions in private. When he was talking solely to Pohlad and St. Peter, Goldklang said, “Everybody was sensitive regarding confidentiality, so we kept a fairly tight circle on that.”

As the talks progressed and the circle widened, Goldklang said, “I talked to Derek Falvey [Twins president of baseball operations] several times, but the point person on the Twins side was Dave [St. Peter].”

The talks weren’t contentious. “It was a classic situation of both the Saints and the Twins recognizing that there would be meaningful benefits for each to enter into this type of relationship,” Goldklang said. “I don’t think it’s fair to say that one side had more leverage than the other. Discussions never had that tone to it.”

When the two teams finally unveiled their partnership in early December, they disclosed that the Twins were buying a minority stake in the Saints.

“No shareholder of the Saints is selling to the Twins,” Goldklang said. “The Twins entire investment is being invested directly in the Saints.”

The Saints enlarged the pool of owners to accommodate the Twins equity stake. “The Twins had an interest in being our partner,” Goldklang said, and it was clear relatively early in the talks that the Twins were prepared to put some money into a partnership deal. “Discussions didn’t start out with a specific percentage [ownership share],” Goldklang said, but it was “part of continuing discussion.”

When the Saints opened their new ballpark in 2015, Goldklang, the organization’s chairman, Saints president Mike Veeck and actor Bill Murray collectively owned more than 80 percent of the team. Even with the Twins equity stake, the three men remain majority owners.

Veeck is often the public face of the Saints in Twin Cities sports media interviews, and he’s the guardian of the club’s “Fun Is Good” culture. Goldklang’s relationship with Murray is even more longstanding. They originally crossed paths in the early 1980s, when they each owned shares in a Utica, N.Y., baseball team.

Several people hold minority interests in the Saints, including Goldklang’s sons, Jeff and Michael. They all work together in a baseball and sports management business called the Goldklang Group, which is based in New Jersey.

When the Saints potential move to Triple A baseball surfaced, Marv Goldklang already was the principal owner of two affiliated teams located in Charleston, S.C., and Hudson Valley, N.Y. Since 1979, Goldklang also has been a shareholder of the New York Yankees.

For decades, he’s had one foot in affiliated baseball, and the other foot in an independent league. Despite the Twins interest in the Saints becoming its Triple A affiliate, that option wouldn’t become a reality until the Saints agreed to pay an affiliate entry fee.

Some media organizations reported that fee would be $20 million. In a news conference and in media interviews, Goldklang said that figure was incorrect. He won’t divulge the amount of the one-time fee. “There is a confidentiality agreement that is in effect with Major League Baseball,” he said. Whatever the fee was, it didn’t derail a Twins-Saints partnership.

In the early days of the Saints existence, baseball purists didn’t show much respect for the Saints, who played in a subpar ballpark in St. Paul’s Midway in what some viewed as a “beer league.”

Yet mutual respect was on display when the Twins and Saints held a joint news conference this month to announce their partnership. The Twins’ St. Peter said his organization was “ecstatic” to forge a deal with the Saints.

St. Peter, who has worked for the Twins since 1990, has known Goldklang for many years, which simplified the negotiations because they already had a positive relationship. Until 2014, Goldklang owned the Fort Myers Miracle, which served as the Twins High A Minor League affiliate.

“Dave obviously was centrally involved in our relationship, and it was a good relationship not only in terms of the affiliate context, but also we were actively involved in helping to operate Major League spring training for the Twins” in Florida, Goldklang said.

Both clubs have an overarching interest in expanding participation in baseball. “We could talk forever about the challenges of increasing interest in the game of baseball among young kids growing up who are presented with all types of options and attractions,” Goldklang said. He’s optimistic that by joining forces with the Twins that they collectively will have a greater impact on youth programming, which includes baseball and softball.

Until late 2020, Goldklang didn’t know how his Charleston and Hudson Valley teams would be affected by Major League Baseball’s realignment of its Minor League system. However, he and other baseball owners faced more immediate concerns caused by Covid-19.

“The real challenge this year was dealing with the challenge of keeping people employed when no revenue was coming in,” Goldklang said. “The seasons in Hudson Valley and Charleston were cancelled.”

The Saints normally played a 100-game schedule in the American Association, but it was reduced to 60 games this year. The Saints played their home games in Sioux Falls, S.D., in the early weeks of the season, because the state of Minnesota’s coronavirus restrictions prohibited play at CHS Field.

Ultimately, the Saints returned to their home fans. “Even when we played games in St. Paul, we were severely restricted in terms of the numbers of fans we could have,” Goldklang said. “We knew we were going to lose a significant amount of money, and we did. We did it because we wanted to keep our name, our brand, our presence, the experience of coming to a baseball game alive and not lose the entire year.”

As a Triple A affiliate, the Saints likely will play 72 games at home in 2021, instead of the 50 home games they played in the American Association. “I’m confident that there will be a season,” Goldklang said, however, he noted that Covid-19 could disrupt the schedule at the start of the season.

While Goldklang is well-connected within the baseball world, he was kept in the dark for a long time about the affiliation future of his Hudson Valley team. “We didn’t know until the Yankees actually put out an announcement in early November,” he said.

The Twins partnership offers the Saints new opportunities, but Goldklang acknowledged the change also has some bittersweet elements to it. One of the most difficult conversations he’s had this year involved telling George Tsamis that his 18-year tenure as the Saints manager had come to an end. “I’ve always said George is family,” Goldklang said. “It hurts to lose him, and also it hurts to see, to know how difficult the experience is for him.”

There also will be some changes in Goldklang’s role. “I’m going to miss being involved with George in deciding what players to sign,” he said. “When I was at the ballpark, I’d go out on the field during batting practice. I’m not going to do that with Twins Triple A players.”

Under the new partnership, the Twins will select the players, manager and coaches. “We are really looking forward to the new relationship with the Twins,” he said. “But I think there will be a part, for all of us involved with the Saints, that we’ll miss the last 28 years.”

Goldklang is quick to emphasize that the Saints are not being subsumed into the Twins organization.

The Saints ball pig, the characters who act as “ushertainers,” and the Saints penchant for staging goofy events are being retained. “There will be no change in terms of the experience of attending a game at CHS Field, except for the players on the field,” he said.

In a decision targeted to its loyal fan base, Saints management chose to keep the same ticket prices after the Saints become a Triple A team. “It’s who we are,” Goldklang said. “We are about affordability. We are about families. Could we charge more? Would people be willing to pay more to see the Twins stars of the future? Probably. But that’s not what we’re about.”