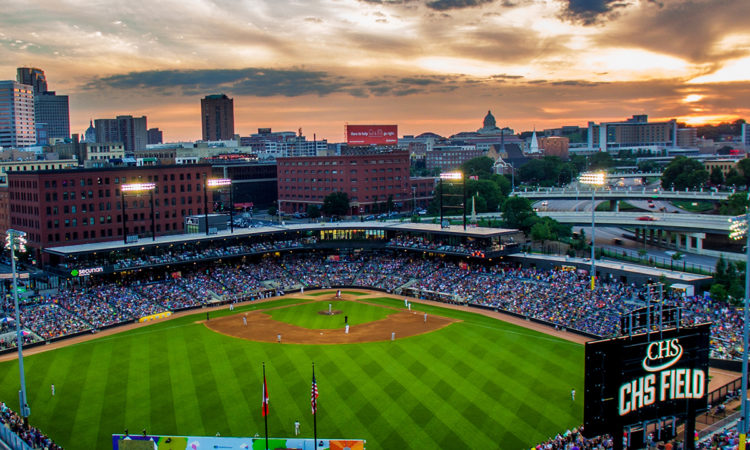 Next season, the St. Paul team will become the top minor-league team for the Minnesota Twins.
By Adam Platt
December 10, 2020

When the St. Paul Saints moved to CHS Field, the team’s Co-Founder and Chairman Marv Goldklang noticed something different about their games. “At Midway [Stadium] by the seventh inning people were gone. At CHS, when you had a good game, people stayed,” he says. “A higher percentage of our fans are now more involved in the game.”

Though Goldklang’s collection of teams has long included clubs affiliated with Major League Baseball (MLB), the Saints had long been skeptical of its value to them, preferring to remain independent of the constraints imposed on affiliated teams by MLB. Saints co-owner Mike Veeck had long spoken of constraints MLB clubs had imposed on his teams’ marketing campaigns and promotions, known for their irreverence, not earnestness.

But last year, when Goldklang was circulated a proposal for the reorganization and contraction of Minor League Baseball that would send 40 teams packing, that plan had the Saints moving in. And because more and more Saints fans were coming for the baseball, Marv Goldklang and the Saints decided to consider it.

Yesterday the Twins and Saints announced what had been all over the press for over a week: The Saints will become, in 2021, the highest (AAA) minor league club in the Twins organization, adding six weeks of play in April and May and making a substantial change to their organization. As part of the transaction, the Twins will acquire a minority interest in the St. Paul club. The Saints must pay a multi-million dollar fee to MLB, “less,” Goldklang says, than the rumored $20 million. These two transactions may be connected, but Goldklang says he can say nothing more, bound by a confidentiality agreement.

As an affiliate of an MLB team, the Saints will give up control over hiring and paying players and coaches, all of whom will be chosen by the Twins. Everything else, the two organizations have assured Saints fans, will remain under the Saints domain, from ballpark concessions to promotions. “The Saints will remain the Saints,” Goldklang says, with the added benefit of being home to the Twins’ top minor league prospects as they rise to the majors.

The move means the end of the road for longtime Saints manager George Tsamis, who Goldklang describes as “family,” and is considering other roles with the Saints. All other senior positions at CHS Field remain unchanged. Pending Covid alterations next spring, the Saints would pick up 22 additional home games and start play in early April rather than mid-May. The only additional skill the Saints will need to add as a AAA team is booking air travel. As an independent, the Saints traveled primarily by bus, but with AAA teams sited from coast to coast, the team expects to be flying more.

Marv Goldklang has long told all comers that he was not in minor league baseball to get rich, but to have fun. Also a minority owner of the New York Yankees, Goldklang depicted the Saints transition—motivated by MLB’s desire to reduce expense and travel in its minor leagues—as not being about economics for the Saints. “We don’t expect to lose money” as an affiliate,” he says, but for both the Twins and Goldklang Group, “it’s about growing the game and expanding its footprint in our community.”