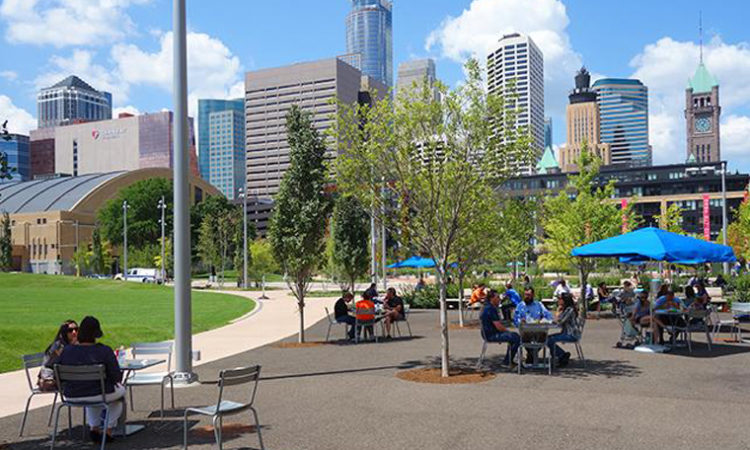 The suit says that the agreements that created and govern the operation of the Commons violate the Minneapolis City Charter. ( Photo by Peter Callaghan/MinnPost)

Inside the David Vs. Goliath-Esque Lawsuit Over the Commons Ownership in Minneapolis

During Wednesday's hearing, Hennepin County District Court Judge Bruce A. Peterson was, at different times, confused, amused and impressed by the arguments against the Commons deal.
By Peter Callaghan
March 22, 2018

The small size of the courtroom only emphasized the number of lawyers on hand — and the apparent legal mismatch they represented.

That count was six lawyers vs. one, with the six defending against a suit filed by the one, who argued in a Hennepin County courtroom on Wednesday that the complicated deal that gives the Minnesota Vikings free use of the Commons, the downtown park adjacent to U.S. Bank Stadium, is illegal.

Specifically, the suit —  filed on behalf of former city council candidate John Hayden and argued by attorney and former city Council Member Paul Ostrow — says that the agreements that created and govern the operation of the park violate the Minneapolis City Charter, which gives the authority to own and operate parks solely to the Minneapolis Park and Recreation Board.

To understand the case, some background is needed: The land beneath the Commons park was acquired by the Ryan Companies as part of the project to build office buildings, apartments and a parking ramp next to the stadium. The company signed a deal with the Vikings that would give the team and the stadium authority free use of the park during game weekends and before and after other events — an agreement that would stay with the land even as its ownership changed.

Initially, the Minneapolis Park and Recreation Board was in line to build and operate the park. When park board members balked at doing so in 2014, saying the park didn’t fit with the agency’s mission and master plans, a second deal was negotiated: The park would be developed with city money and private donations and given to the board, which leased it back to the city for $1. The city, in turn, has arranged with a non-profit to operate it.

Those deals are at the heart of Hayden and Ostrow's suit. Becauase the Minneapolis City Charter appears to prevent the city of Minneapolis from doing things that are the domain of other city entities — like the park board — it can’t operate the Commons (or any other park), the suit argues. And if that is the case, the city certainly can’t spend city money, such as the $750,000 appropriated for this year, to operate the Commons.

The city of Minneapolis, the Minneapolis Park & Recreation Board, the Minnesota Sports Facilities Authority and two entities controlled by Vikings — the team itself and a legal entity that handles the stadium operations — are all defendants in the suit.

Ann Walther, representing the park board, said both the city charter and state law give the agency broad authority to further its mission, including contracting with other public or non-profit entities to provide park and recreation services. She cited the I-35w Bridge Collapse memorial as an example where the board agreed to let the city build and maintain the facility on park land.

Another example is the new winter recreation building in Wirth Park, which is being built by the Loppet Foundation. The center will be given to the park board, which will then lease it back to the foundation, which will operate it. The Brian Coyle Center is also park owned but operated by Pillsbury United Communities.

During the hearing, Hennepin County District Court Judge Bruce A. Peterson was, at different times, confused, amused and impressed by Ostrow’s arguments against the Commons deal. But he also seemed to be leaning toward concluding that there was less there than Ostrow hoped.

Indeed, the suit represents something of a last-gasp challenge, one that's part of a larger and now lonely campaign against not only the Commons but U.S. Bank Stadium itself and the many deals done in the name of convincing the Minnesota Vikings to remain in the Twin Cities.

Still, Hayden and Ostrow are continuing the fight. Ostrow previously challenged aspects of the arrangement in court and is handling this case without pay. He estimates his bill would be approaching six figures if there was someone willing and able to pay.

There isn’t. While there remain lots of Minneapolis residents and politicians who agree with them, there aren’t so many who are willing to step up and help.

And yet, for all that — and despite the mismatch in legal firepower — Ostrow did raise one issue on Wednesday that got the attention of Judge Peterson.

It came after Peterson told Ostrow that while he had learned a lot from him, rather than making political arguments against the stadium deal he would be better served telling the judge why the case shouldn’t be dismissed. “What legal authority can you point me to … a case or statute that says what they did here in this partnership was illegal?” asked Peterson.

Ostrow then landed on an argument that appeared to strike a chord. Without conceding that the Minneapolis Charter and state law can be read to say the park board could create partnerships with others to operate parks, Ostrow argued the same charter explicitly says none of those entities can be the City of Minneapolis.

“Chapter 4 of the city charter could not be clearer,” he said. “The city council, pure and simply, does not have the authority to operate and maintain and spend money on parks. Whether or not the park board took an action that green lights the city council to violate the charter is not the issue.”

When the attorney representing the city, assistant city attorney Sarah McLaren, returned to her previous assertion that the park board had broad powers, Peterson interrupted her. “The park board can do it. Gotcha. But this says the city can’t,” he said of the charter.

McLaren was left to argue that such an interpretation would work against other provisions in the charter. “I do believe that that kind of crimped vision of the charter really works against the purposes of the charter which are to permit the park board broad latitude in effectuating it charter-given responsibilities,” McLaren said.

Added the city's McLaren: “The longer this case continues, their real issue is with the policy decisions that were made. The real issue is that the city chose to acquire land in collaboration with the park board that was subject to a restrictive covenant for use by the Vikings. That is a valid issue but it is a political issue, not a legal challenge to the city’s action.”

Shannon Bjorklund, who represented the stadium authority, said Ostrow and others had their chance to make their case to public authorities who made the decisions about the stadium — and did not prevail. “The fact that those positions didn’t carry the day doesn’t generate a justiciable issue for this court,” Bjorklund said.

Both the MSFA and the Vikings asked to be dismissed from the case. Peterson acknowledged that while there are no allegations in the suit that they acted illegally, he admitted to being torn about the decision, since they would be damaged if he ruled the park use agreement invalid and suggested they might be better off sticking around to argue against that.

Peterson said he would issue a decision in coming weeks.