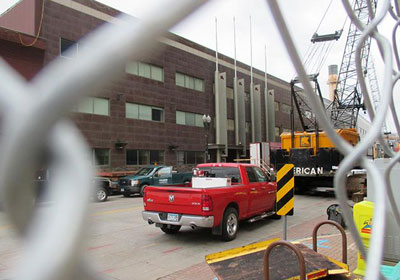 In Downtown St. Paul, If You Unbuild It, Will They Come?

There is lots of history in the row of buildings that sit on the bluff between downtown St. Paul and the Mississippi River.

There’s the former home of West Publishing, which marks the place where a company with national, even global, reach grew up before relocating to Eagan.

And then there’s the old Ramsey County detention center, which marks an era when governments thought nothing of placing workaday facilities on land that boasts multi-million dollar views.

“I thought the jail was a hotel when I came here for graduate school,” recalled County Commissioner Rafael Ortega on Friday. County officials brought back representatives of both of those story lines to commemorate the start of a massive demolition and clean-up project they hope will spur even more redevelopment in downtown St. Paul.

West moved out of its building in 1991, and the complex became county offices until the last workers moved to other facilities last August. The jail, built in 1979, was closed in 2003.

A total of seven buildings, dating from 1886 to 1979, will be demolished over the next 13 months at a cost of $13.5 million. (Of that, $9 million is to construct a concrete retaining wall up to two feet thick that will be secured to the bluff with rock bolts.) Once the project is completed, the county hopes that a developer or developers will buy the 3.88 acres of bluffside for uses ranging from residential and hotel to commercial. If they do, they will have panoramic views of the river.

“It’s all about the view,” said county commission chair Jim McDonough. A previous redevelopment deal fell victim to the Great Recession. The county commission decided to move ahead with a plan to reduce the risk for future developers by doing the demolition with county funds. It hopes to recover the money spent to ready the site for development when the parcels are sold. And it will end up with land that is on the property tax rolls for the first time in two decades.

“We see this site as part of a catalytic environment to making St. Paul a great city again,” Ortega said.

Louis Jambois, president of the St. Paul Port Authority, called the site on Kellogg Boulevard important in reconnecting downtown to the river. Officials looked at offering the buildings for reuse but said “developers were not enamored with the buildings that are here.”

In an office overlooking the river where their father Dwight served as president of West Publishing, Vance and Fane Opperman recalled going to work with him in what they described as a joyful workplace.

“I was a West kid,” Fane said. “Vance and I got that great Midwest work ethic, but with a twist  — that it was a joy to work.” Vance, who was 9 when he first visited the West offices, remembered it being a paradise for a young boy.

“Secret floors and great big clanky machines,” he remembered. “You’ve got rails, you’ve got locomotives, I thought this was really neat.” He said the company moved its entire operation to an existing facility in Eagan because modern manufacturing plants need to be built horizontally, not vertically, as it was downtown. He said the board fended off bids from other states to keep in in Minnesota and close enough for current employees to stay with the company.

Thomson Reuters bought the legal publishing company in 1996 for $3.4 billion. Dwight died in 2013.

Demolition bids came in higher than the $11.5 million in bonds already approved by the county commissioners. James Homolka, the project manager for the county, said the bid environment for construction isn’t very good for governments because there is so much construction activity. Ortega said the county will transfer money from other capital projects that are under budget, and the project will move ahead as planned.