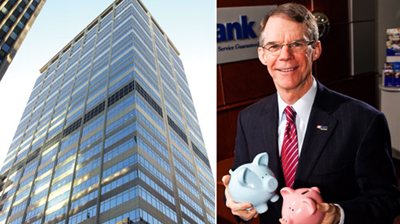 How U.S. Bank Saved its Own Bacon

Richard Davis, chairman, CEO, and president of U.S. Bancorp, the parent company of U.S. Bank, moved into crisis mode when Lehman Brothers failed in the fall of 2008. His three-day-a-week travel schedule, which had included public meetings with customers, came to a screeching halt.

“I can’t be in a crisis mode from the road,” Davis notes. “I have to be in the cockpit, not in the back of the plane. I needed to be in house, head down.” That fall, he began meeting with his leadership team twice daily and spent at least 14 hours a day at the company’s Minneapolis headquarters.

Like banks everywhere, U.S. Bank was facing a financial crisis whose severity none of its top leaders had ever faced. Money had stopped flowing on a global scale. Davis’s team reviewed its portfolios twice a day to identify and unload risky holdings. At night and over the weekends, they kept their eyes glued to the television and the Internet to follow the overseas markets and monitor whether the situation was worsening—and whether that would mean that access to money, the fuel of a bank’s business, was drying up.

Number 129 on the 2009 Fortune 500 list, U.S. Bancorp (NYSE: USB) is now the fifth-largest commercial bank company in the country, up from number six last year. (As a holding company, U.S. Bancorp is also the parent company of several other subsidiaries, notably Elavon, an Atlanta-based payment processing firm.) Total assets rose from $195 billion in 2004 to $281 billion in 2009. And the bank’s customer base ballooned from 13.1 million to 17.2 million over the same time period.

The crisis, if not completely past, has subsided substantially, though numerous banks in Minnesota and across the country remained troubled. Not U.S. Bank. And as banks continue to falter, U.S. Bank—one of the few top-10 banks in the U.S. to report a profit every year for the past 15 years—looks stronger than ever.

Davis readily acknowledges that he and his leadership team were not without some culpability in the crisis. But they look close to angelic compared with some of the nation’s largest banks. During the real estate bubble, Davis and his team strayed at most a few feet from U.S. Bank’s long-held conservative policies. But the bank’s old-school roots and its ability to withstand criticism and peer pressure saved it from implosion. U.S. Bancorp will emerge from the downturn without having had to sell any assets to raise capital or divest itself of any poorly performing businesses. 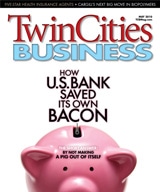 Bio Building Boom
Editor's Note-Data, a Dinger, and a Prayer
Chamilia Gives the Charm Bracelet an Upgrade
Framing a Bike Business
See all stories by this author >