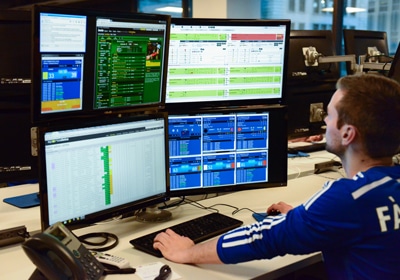 How The Legalization Of Gambling On Sports Could Impact MN Companies

For years, the parent company of Minneapolis-based Sportradar US has provided sports statistics to international gambling operators. A change in U.S. law could result in a significant uptick in the data and security services it provides to national companies.
April 03, 2017

America’s rule against gambling on professional sporting events could shift as soon as this year, the Wall Street Journal reported, as more commissioners of major sports leagues — as well as President Trump — have come out in favor of the law’s reversal.

Echoing a pro-gambling op-ed written in 2014 by Adam Silver, commissioner of the National Basketball Association, fellow NBA executive Dan Spillane told the WSJ that a change could be on the horizon. “There is definitely forward motion,” Spillane said. “Five years ago, no one saw this as something that could realistically happen.”

So far, commissioners of the NBA, Major League Baseball, Professional Golfers’ Association and Major League Soccer all back the legalization of gambling. Trump has said he is “OK” with betting on professional games becoming legal and, last January, the Supreme Court said it was still considering hearing a case brought up by the state of New Jersey that has the potential to legalize sports betting.

If a change in law were made, a sports data company with its U.S. office in Minneapolis would almost undoubtedly be one of the key players involved in the establishment of a (somewhat) new gambling market that already sees hundreds of billions of dollars wagered each year.

Over the years, Sportradar has grown to be one of the premier companies in the burgeoning field of sports data. From its Minneapolis, Brooklyn and San Francisco offices, it receives raw data gathered from sporting events in real-time, which it then translates and disseminates to hundreds of clients, including Fortune 500 companies. Currently, Sportradar has exclusive data partnerships with the NBA, NASCAR, the National Hockey League and the National Football League. It also provides statistics on dozens of other sports leagues, such as Major League Baseball.

The October 2016 issue of Twin Cities Business looked at Sportradar and how it got its start providing sports data to gambling operations in Europe and Asia. Today, just over half of the Swiss-based company’s revenue comes from Betradar, a subsidiary that provides sports data to hundreds of betting operators.

Given Sportradar’s international experience with sports betting, it would not only be bound to have a hand in providing the data referenced by betters, but also the digital security services that help prevent illegal betting tactics. In fact, Sportradar’s Fraud Detection Services are already in use in the U.S. Both the NHL and MLS employ Sportradar in the fight against gambling manipulation.

However, Nick Stamm, spokesman for Sportradar’s U.S. headquarters in Minneapolis, has said the company remains entirely focused on producing the content used by the Associated Press and its other clients. “In the U.S., we are digital media focused,” he said, “because unless you are in Las Vegas, there’s not much of a betting market right now.”

Minnesota is also home to dozens of other companies and startups within the sports data field — particularly in fantasy sports operations — that could be impacted by legalized gambling. Both SportsHub Technologies and SportsEngine operate out of Minneapolis and, last year, collaboratively opened The Pitch, a coworking space aimed at the growth and development of businesses within the sports technology industry.