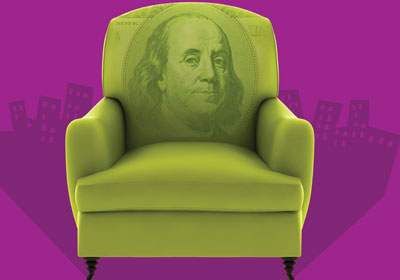 “Cash is King” preaches Rodney Johansen, president and CEO of HOM Furniture Inc. His aptitude for keeping plenty of it on hand has propelled the homegrown company from selling Mexican imports at a mall in St. Cloud to Minnesota’s biggest furniture retailer.

2008
• HOM Furniture signs a purchase agreement for Gabberts in Edina.

2015
• HOM opens its first “superstore” in Little Canada featuring all of its brands—Gabberts, HOM, Seasonal Concepts, Dock 86—under one roof, making it the largest furniture store in Minnesota.

At a time when so many retailers are specializing and downsizing, HOM hit $230 million in sales last year by continuing to broaden its assortment. That strategy was underscored earlier this year with the opening of HOM Furniture’s Little Canada superstore, where all of its brands are being sold under one expansive roof for the first time. That includes high-end Gabberts, mid-market HOM, discount Dock 86 and patio furniture collection Seasonal Concepts. From $300 sofas to $40,000 bedroom sets, HOM Furniture is working to be all things to all shoppers.

Now with 22 stores in the five-state area, Johansen expects to hit $250 million in sales this year but has no immediate plans for further expansion. “The most profitable growth,” he says, “is within your existing operations.”

HOM’s losses during the recession were a third less than the industry average, and the company has more than made up for it, Johansen says, settling out 30 percent ahead of pre-recession earnings.

How did it do it? “A lot of good business decisions,” Johansen says with a chuckle. All kidding aside, he points to a few factors that worked to the company’s advantage. HOM owns all of its own property, bringing down the cost of occupancy. The company also invests in freestanding commercial buildings (mostly outside the metro area) that are leased to other businesses. It has been a strategy since its earliest days.

Roots in the land

“There” was a farm in Sioux Falls, S.D., where Johansen and his older brother Wayne grew up yanking weeds out of the soybean fields. It prepared them for hard work and long hours, and they developed an entrepreneurial spirit. Their father sold the farm when the boys were teens. Wayne Johansen, now HOM’s chairman of the board, went into imports, selling jewelry, pottery, ceramics, paintings, even leather goods. Rodney joined him.

Together, the two operated a warehouse in St. Cloud and rented out its adjoining storefront to a waterbed dealer. Seeing the growing popularity of sleeping on a bed of water, they decided to get into that business. The brothers opened the Waterbed Room in 1979 and built it to more than two-dozen showrooms, making it the Upper Midwest’s largest retailer of flotation sleep products, Johansen says. When that market sprung a leak a decade later, the brothers changed the name to Total Bedroom, and they diversified a few years later with HOM Oak & Leather.

Calling it HOM by lopping off the “e” was quite intentional and even involved the advice of a business-naming consultant. “We were looking for something unique and short enough for exterior signage,” says Johansen. Inspired by STOR Furnishings, which was acquired by IKEA, they went with HOM and never looked back.

In 1996, Total Bedroom and HOM Oak & Leather merged into HOM Furniture. The privately owned company is the 37th-largest furniture retailer in the country, according to industry publication Furniture Today. It boasts 1,100 employees, including the next generation of Johansens: Rodney’s son Kyle manages merchandising for the HOM and Dock 86 brands; Wayne’s son Alex works in IT.

The assortment now ranges from bargain to budget-busters, but the company’s core philosophy, just like its largest division, HOM, is all about moderation. That’s true of the merchandise itself and even the unassuming corporate offices above the Coon Rapids HOM showroom: a plain, glass-doored, nondescript entryway. It doesn’t scream “top furniture retailer in Minnesota.” But then, neither does Johansen, who admits that his Ham Lake home, while furnished with a mix of brands, is probably more HOM than Gabberts.

The HOM showrooms are quintessentially moderate, and it’s not just the prices. The selection is not too modern, not too trendy—solid furniture, decent prices. Much of it is private label, which helps drive customer loyalty. On the continuum of furniture retailers, HOM would fall slightly below Macy’s Home Store, which was the perfect vantage point from which to capture new customers as they traded down in a tough economy.

“HOM is easy to shop, with appealing price points and a good range of mass appeal items,” says Beth Perro-Jarvis, retail strategist with Ginger Consulting in Minneapolis. “No, it isn’t high style like Room & Board or Gabberts, but they have fair prices, quite a lot of selection, plus excellent assortment in upholstered furniture, and that’s certainly where they win over IKEA.”

In 2010, with the housing market—and, as a result, the furniture industry—continuing to struggle, Johansen noticed the growing popularity of furniture outlet centers. HOM Furniture was sitting on vacant storefronts it bought up as retailers closed, such as the old Levitz store in Little Canada.

That became HOM Furniture Inc.’s discount division, Dock 86. The name is a play on the expression to “86”—i.e., to eliminate—middlemen and high prices. Dock 86 sells some clearance merchandise from HOM showrooms, but the bulk of the product is closeouts and overstock purchased from other retailers and manufacturers and liquidated at up to 70 percent off retail. Dock 86 has a store in Rogers, and the original Little Canada store became part of the HOM superstore that opened in March.

At the 185,000-square-foot HOM furniture and design center in Little Canada—the largest furniture store in Minnesota—subtle interior changes let shoppers know when they’ve left one brand and entered the world of another. Dock 86 is a brightly lit warehouse-style space filled with row upon row of bargain sofas, chairs and tables. A mattress department serves as a buffer between Dock 86 and the HOM showroom, where the lights are softer and furniture is merchandised in room vignettes, but with price tags that often reflect savings or everyday value. The assortment goes on, from pillows to patio to recliners, to the “Uptown” department filled with sleeker items aimed at apartment dwellers.

On the other side of the guest services desk, the displays become more elegant, with tiled walls, gas-burning fireplaces and dramatic chandeliers. This is Gabberts, where everything is custom-ordered, and if you have to ask about prices, you probably wandered into the wrong room.

Dock 86
A discount furniture warehouse selling overstock, one-of-a-kinds and special purchases for as much as 70 percent off retail. Locations in Little Canada and Rogers.

Seasonal Concepts
HOM kept the name when it acquired this company and uses it for the patio furniture division at all HOM showrooms.

Johansen long had his eye on Gabberts Design Studio & Fine Furniture, a family-owned store that anchors the upscale Galleria shopping center in Edina. “It’s the finest [interior] design studio in the Upper Midwest,” he says. But by 2008, things were getting more difficult for single stores, especially in the high-end market. When Jim Gabbert was ready to exit, he called Johansen. The details of the sale, finalized in 2009, were not made public. “We knew what we were buying,” Johansen says—“a customer base that loved their brand and had been well taken care of. That’s important to us.”

Gabberts became profitable almost immediately after the sale, Johansen says. The CEO spent six months at the Galleria store, observing the design team, listening to customers. Loyal Gabberts clients worried HOM would tarnish the high-end brand, but no one seems to be complaining now, as HOM, with its larger buying power, has been able to lower some prices and add new categories, such as flooring. Meanwhile, the design studio that is central to the Gabberts shopping experience remains intact.

Johansen says the biggest mistake HOM made when it took over Gabberts was adding too much back stock for the instant gratification that is central to the HOM experience. “We felt it was an enhancement, but the customer didn’t see the value,” Johansen says. “They want to be able to custom-order everything.”

The furniture and design center at interstates 694 and 35E in Little Canada is the largest in Minnesota, at 185,000 square feet. Here’s what’s inside:

HOM’s first big move with Gabberts was adding an edited assortment of the high-end brand to three HOM showrooms in the Dakotas and Iowa. “The goal when we bought Gabberts was to leverage the brand,” Johansen says. Not only did small-town shoppers buy luxury, many shopped both brands.

“Consumers are used to playing the high-low game even with furniture nowadays,” says Mary Van Note, Ginger Consulting partner with Perro-Jarvis. “It’s convenient to shop it all together, plus it must be a much more efficient operation for the company.”

The Little Canada location is attracting a new customer base for Gabberts—shoppers who didn’t want to drive to Edina and those who, as Johansen says, “didn’t see it as their store. Putting them under one roof opens customers’ eyes to what each brand is. And the opportunity for more mixing is there.”

The size and product depth also make the Little Canada superstore a destination. And Johansen believes that even in the age of Amazon, shoppers will leave the house—and even drive out of their way—to sit on a sofa before buying it. “Furniture still has to be touched, felt, even smelled.”

Allison Kaplan covers retail for Mpls.St.Paul Magazine. She is a frequent contributor to Twin Cities Business.