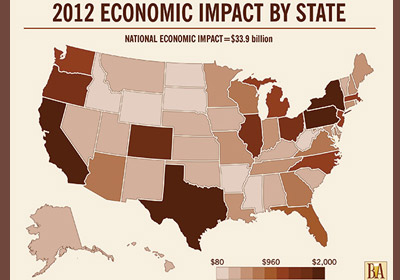 The Brewers Association said that, in 2012, the craft beer industry had a $741.85 million “economic impact” in Minnesota. And data from a local group corroborates that craft beer is a growing economic force.
By Jake Anderson
December 29, 2013

While there has been plenty of anecdotal evidence to suggest a continued craft beer boom in Minnesota—new breweries popping up, existing ones expanding, local beer makers taking home national awards—a new report aims to quantify the economic impact of the industry.

The craft beer industry helped add roughly $741.85 million to the state economy in 2012, according to the Brewers Association, a Colorado-based trade group that represents small and independent beer makers. That’s the 16th-highest among states.

This marks the first year the Brewers Association issued its economic impact report, so there’s no apples-to-apples comparison to prior years. But Bart Watson, the association’s staff economist, told Twin Cities Business that, “like much of the country, small and independent craft brewers in Minnesota have seen strong growth in recent years, and with production increases and new construction have come additional economic contributions to the state.”

The national study defines “economic impact” as including both “direct” contributions—craft breweries’ or liquor retailers’ revenue, for example—and “indirect” effects, such as the impact on ancillary industries like beer ingredient suppliers and brewing equipment, among other things.

Meanwhile, the industry helped contribute more than $257 million in wages in Minnesota last year, as well as nearly 8,000 jobs, the report found.

The national economic impact of craft beer is an estimated $33.9 billion, according to the report. View a state-by-state breakdown here.

“The Brewers Association report shows that our industry isn’t just about beer,” Clint Roberts, executive director of the Minnesota Craft Brewers Guild, told Twin Cities Business. “Craft brewing supports industries and jobs too, and has a positive impact on the local economy.”

Statistics from the Minnesota Craft Brewers Guild, a locally-based organization, further exemplify that craft beer is a growing contributor to the state economy, and that 2013 was also a year of significant growth. (The Brewers Association report only took into account 2012 figures.)

While Minnesota’s ranking in the Brewers Association report is admirable, “looking at the growth, awareness, and excitement over the last couple of years, we are poised to climb the list and build our stature nationally in the land of craft beer,” Roberts said.

Many Twin Cities breweries are in the process of expanding, and many are adding so-called “taprooms.” Town Hall Brewery, a Minneapolis brewpub, is also gearing up to expand its production. And earlier this year, the Brewers Association ranked three Minnesota breweries— August Schell Brewing Company, Summit Brewing Company, and Cold Spring Brewing Company—on its “Top 50 Overall U.S. Brewing Companies” list.

And while it is growing quickly, craft beer is obviously only one segment of alcoholic beverages contributing to the Minnesota economy. For example, the “total economic impact” of the wine and spirits industry in Minnesota is $3 billion annually, according to recent data from the Wine & Spirits Wholesalers of America.