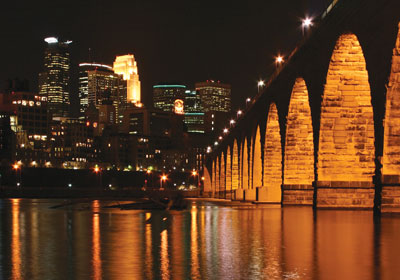 How Do We Look?

What Oklahoma City leaders noticed the most when they visited the Twin Cities this summer.
October 01, 2011

Like many major U.S. urban centers, Oklahoma City organizes an annual trip through which dozens of its business and community leaders visit other metropolitan areas to learn how well they’re doing with economic development, education, infrastructure, and socioeconomic issues. Such tours provide fresh intelligence that helps Oklahoma City with its own economic development efforts.

This year, in late July, leaders from Oklahoma City visited the Twin Cities.

“We pick cities by thinking about pressing issues we have, and things we really want to learn about—either new initiatives, or ones we already have but may be able to do better,” says Roy Williams, CEO and president of the Greater Oklahoma City Chamber of Commerce, who led the Oklahoma City delegation of 45 business and civic leaders. Reasons the Twin Cities region was chosen include its history with charter schools, its progress with mass transit, and its strong parks systems.

Why here? “You have been at it for 20 years now,” Williams notes. Minnesota was the first state to pass a charter school law, in 1991; and the first to open a charter school, when City Academy in St. Paul opened a year later. City Academy now is one of the 148 charter schools in the state that will be educating approximately 39,000 students during the 2011–2012 school year. Charter school enrollment has tripled since 2001 and accounts for nearly 5 percent of all Minnesota students, up from 1.2 percent 10 years ago.

The takeaway Williams learned how well charter schools can work, but also that “it’s easy to grant a charter; it’s very difficult to take it away,” he says. “If they don’t perform better [than traditional public schools], they should be disbanded, but that’s a difficult task. So prior to giving a charter [in Oklahoma], it needs to be better set up” so that the state can close it quickly should that be deemed necessary.

Why here? “Our voters recently approved construction spending on transit,” Williams says. “We know that Minneapolis, and especially St. Paul, are making significant infrastructure expenditures into transit, and we wanted to learn what you have learned so far.”

While work continues on the Central Corridor light rail line, the Metropolitan Council’s 2030 Transportation Policy Plan looks to double transit ridership within the next two decades, primarily through new bus routes, enhanced bus lanes, and the development of a network of rail and bus transitways.

The takeaway “It seems as though so much of your resources are going for construction and infrastructure, it could eat into the ability to fund operations,” Williams observes. “We heard a lot of concerns about it.”

The Oklahoma group also was surprised to find that the Twin Cities relies heavily on state and federal funding for its transportation infrastructure projects. “Our program is paid for with dedicated sales tax—no debt, no financing. Until we collect the money to pay for it, we don’t build it.”

Why here? Minneapolis and St. Paul have been widely recognized as having great parks and recreational opportunities. USA Today has described Minneapolis’s park system as being the “closest to park nirvana.”

Approximately 18 million people visit Minneapolis’s parks each year. The city’s also attracting more bicyclists through its public bike-sharing program and the addition of more trails on and off city streets. Meanwhile, St. Paul is embarking on plans to create “a 21st century parks and recreation system” that, among other goals, would focus more on activities (such as bicycling) rather than building and maintaining facilities. St. Paul has started using a park dedication fee on new development to help cover the costs of maintaining and improving its parks. Minneapolis is debating whether to do the same.

The takeaway  “The biggest surprise of our trip was all the amenities you have to engage people in the outdoors, including your bicycle program and trail system, and accessibility to waterfronts,” Williams observes. “It was refreshing to see so much foot-traffic activity: [On a] Monday night, downtown was very much alive. It’s a tribute to how much Minneapolis has created an environment where young people are outside doing things, being actively engaged. It comes across as a vibrant community.”

Williams noted that it was good to see the Twin Cities metropolitan area is developing a regional approach to economic development through Greater MSP, the recently created private-public partnership whose mission is to stimulate economic growth and prosperity throughout the Minneapolis–St. Paul region. But, he added, “it’s interesting to see the region has taken so long to do it. It’s been happening around the country for decades.”

Williams also thought that concerns about attracting and retaining younger talent—expressed by several Twin Cities locals with whom his group visited—may be a bit overblown: “Consciously or unconsciously, you’ve already gone a long way toward creating an environment that talent wants.”