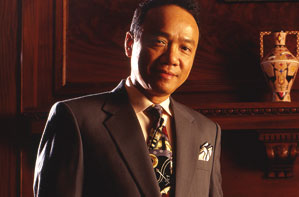 It’s tempting—and not inaccurate—to describe Viet Ngo’s extraordinary personal narrative as a great American success story. It’s just that you’d be severely limiting yourself geographically. Ngo, a native of Vietnam, has created a design and engineering enterprise that operates in dozens of countries. He estimates that he spends 70 percent of his time away from Lemna International’s Minneapolis headquarters. “I am all over the world,” he says of himself and his business.

Lemna International, which Ngo cofounded 26 years ago, designs, develops, finances, and manages large-scale infrastructure and environmental projects in such disparate places as Mexico, Kenya, Vietnam, and the United States. Though recessionary pressures have been a drag on financing and progress with some Lemna projects of late, Ngo says that 2008 revenues totaled about $100 million and “we expect healthy growth in the future.” The company employs about 600 people around the world.

Ngo’s personal story began in Vietnam, where he was born in 1952, the son of a provincial governor and military man. Ngo’s relocation to the Twin Cities at age 18 was in large part the result of a friendship during the Vietnam War between his father and a University of Minnesota political science professor and U.S. Marine Corps Reserve officer named Harold Chase. A precocious student with artistic ambitions, Ngo had intended to study in France, but Chase suggested the U of M instead.

In Minnesota, Ngo lived for a time with the Chase family, developed his English language skills by watching TV, and worked toward an undergraduate degree at the university in civil engineering, which seemed to offer a more practical career path than painting and sculpture did. He received his degree in only two years, then earned a master’s degree and “almost finished my course work and thesis for a PhD.”

He also worked toward a bachelor of fine arts degree, and, though he didn’t finish the program, he found outlets for his muse in creating massive sculptures—large constructions that formed their own landscapes. His artwork attracted attention and was exhibited around the country.

Meanwhile, as a young engineer, Ngo collaborated on a revolutionary water-treatment process utilizing a common plant known as duckweed. In 1983, Ngo and microbiologist Del Hogan (whom Ngo eventually bought out) patented the process and launched their company, Lemna. The name derives from the Latin word for duckweed, a plant that can feed on the impurities in wastewater and in turn be used to feed animals or fertilize farmland.

Ngo designed a huge water-treatment facility four years later near Devil’s Lake, North Dakota, that combined his engineering prowess with his artist’s sensibility and became an icon of sorts for environmentalists, art enthusiasts, engineers, and even tourists. “My designs are ‘waterparks’ which add beauty and meaning to the communities they serve,” Ngo told a University of Minnesota publication some years ago.

He saw broader opportunities for Lemna that included the financing and management of infrastructure projects and various types of environmental projects among the world’s emerging economies. In the late 1980s, Lemna helped build a wastewater treatment plant in Poland after meeting representatives from that country at a trade show. Within a few years, Ngo was exploring the feasibility of projects in Kenya, Tunisia, and other African nations. The first project Lemna completed in Africa was a road in Nigeria. Dozens of other international projects have followed, and by 2000, the company’s overseas work exceeded its U.S. business.

Asked this spring for a sampling of current or recent Lemna projects, Ngo listed the following:

• A wastewater treatment plant in the state of Chihuahua, Mexico;

• A housing project for civil servants in Nairobi, Kenya, “with the aim to spearhead a movement to provide affordable housing using fast-construction technology from the U.S.A.”;

• A Lemna-owned and -operated preparatory academy scheduled to open this fall in Abeokuta, Nigeria, “to train Nigerian students for entrance to universities in the United States,” Ngo says. “Lemna believes in education and knowledge transfer.”

Now 57 and the father of three grown sons, Ngo describes himself as Lemna International’s president and CEO, “in charge of corporate and business growth.” His wife, Poldi Gerard, is his “trusted and talented” vice president, focusing on public relations, marketing, and strategic alliances. Describing her as “my soul mate,” he adds, “I could not do without her.” Ngo and Gerard divide their time among projects and homes on three continents.

Last year, with more than 300 completed projects to its credit, Lemna celebrated its 25th anniversary. And the future? Ngo’s projections are both philosophical and practical.

“Everyone wants to be a billion-dollar company in five to 10 years,” he says. “We want to be happier and more profitable. We want to create long-lasting and useful things for the world. [For us], the billion-dollar figure is a goal, but not an obsession.”