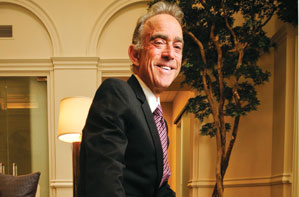 Back in the day, vodka was just an inexpensive, colorless spirit added to fruit juice and vermouth to provide an alcoholic kick. That’s changed—thanks primarily to Edward Jay Phillips (Eddie, to his many friends), who in 1995 licensed a couple of Polish brands and created a new spirits category: luxury vodka.

“Every other category—tequila, gin, rum, certainly single malt scotches—each had a luxury entrant,” recalls Phillips, 64. “But the largest category by far, vodka, did not. One of the reasons was the belief that, for all intents and purposes, all vodkas are the same.” Phillips’ Belvedere and Chopin brands—along with Ketel One, Grey Goose, and others that followed—revolutionized the spirits business, not to mention bar culture, as cosmopolitans and various species of “-tini” incorporated high-end vodkas.

What makes the tale particularly intriguing are the humble origins of the company that would create the category. For years, Ed Phillips & Sons produced “budget” vodkas and flavored schnapps. Edward, Jay, and Lewis Phillips founded the company in 1912 in Manitowoc, Wisconsin, as a wholesaler of candy, newspapers, and tobacco. With the repeal of Prohibition in 1933, they made their company a liquor distributor. Jay Phillips moved it to Minneapolis two years later and launched a popular peppermint schnapps under the Phillips brand, the company’s first “in-house” liquor product. By the end of World War II, Ed Phillips & Sons was the largest spirits distributor in the United States.

Jay Phillips’ grandson, Eddie, was born in Eau Claire, Wisconsin, in 1944 to Morton Phillips (who became president of the family business in 1964) and his wife, Pauline (a newspaper advice columnist under the byline Abigail Van Buren—AKA “Dear Abby”). Eddie studied clinical psychology at Stanford University and the University of Minnesota. But when his grandfather sold Ed Phillips & Sons to Alco Standard in 1971, the Pennsylvania conglomerate asked Eddie to join its beverage business, where he soon became CEO.

It fell to him to buy the family business back and reinvent it. Alco looked ready to liquidate its beverage division in the mid-’80s. Eddie Phillips undertook a leveraged buyout, then to pay down his debt, he sold Phillips Beverage’s liquor distributorships, but kept its production and marketing businesses, Phillips Products Company, and kept an eye out for “opportunities as a brand owner,” he says.

Absolut, the Swedish vodka, had become a pop-culture marketing sensation in the 1980s. Phillips wondered whether there was room in the market for a vodka positioned at a level above Absolut. In 1994, he formed Millennium Import Company to find out.

He and his business partners traveled to Poland, vodka’s birthplace. Tasting products at distilleries, “we began to realize that it was very similar to the wine experience,” Phillips says. Each vodka had distinctive flavors and mouth feel. (Belvedere, for instance, would become known for its vanilla note.) After arduous negotiations with the Polish government, which owned all of the country’s distilleries, in 1995, Millennium became the sole U.S. licensee of two brands that it would position as luxury products: Belvedere, made from a strain of golden rye, and Chopin, produced from local potatoes.

At a time when Absolut and Stolichnaya sold for about $15, the reaction from liquor distributors “was, ‘You’re crazy,’” Phillips recalls. “‘How can you presume to ask $25 for 750 milliliters of vodka?’” Undeterred, Millennium employees sold directly to high-end restaurants and bars. Print ads talked up the vodkas’ “tradition” and craftsmanship, but the brands’ buzz arose primarily from viral marketing. Distributors changed their tune and by 2004, Belvedere alone had reportedly sold $1 billion since its U.S. introduction.

In 2001, the Polish government announced that it was privatizing its distilleries. Belvedere was one of the first. For Millennium, it was an opportunity, but not a wholly welcome one.

“We had managed the brand as if it were our own,” Phillips says. “Suddenly, we were in a position of bidding on it, competing with companies who really had no investment at all in the brand.” To raise the considerable capital needed to buy Belvedere, Phillips Beverage spun off its distilling business to other members of the family. (Dean Phillips, Phillips Distilling’s CEO and Eddie’s son, has shown his father’s talent for niche marketing, introducing UV brand flavored vodkas and Phillips Union flavored bourbon.) Millennium partner Tadeusz Dorda later bought Chopin.

The sale was the end of Phillips Beverage Company, but Eddie Phillips moved on to another category—this time, frozen liquids. In 2008, he and his Millennium Import partner Steve Gill bought a majority stake in Talenti, a Texas producer of “luxury” gelati and sorbetti. Phillips says the business is “growing fast.”

He’s an advisor to the company, but Phillips also chairs the board of Children’s Hospitals and Clinics in Minneapolis, helps run two family foundations, and serves as a director for the Apollo Theater in Manhattan’s Harlem and an advisor to the Worldwide Orphans Foundation. It’s his chance to “give back,” he says. And as Phillips would note, he’s gotten a lot.