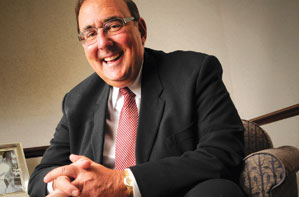 Liberty Diversified Industries, based in New Hope, had entered a new phase of diversification when that interview took place in 2006. The company (which officially becomes Liberty Diversified International this fall), had set a goal of reaching $600 million in consolidated sales by 2010.

It’s closing in on that goal, having grown from $77 million in sales back in 1983, when Fiterman, a third- generation leader of the privately held family business, took over.

LDI began as a corrugated packaging maker. It still is one. But as Fiterman says, it’s also a “portfolio management company.”

“We are different from a venture capital company, which buys companies to sell them,” says Fiterman, an affable man who looks younger than his 61 years. “We buy them to run them.” Liberty brings to its acquisitions the needed expertise in operations and in “how to go to market,” he adds.

His grandfather, Jack Fiterman, founded Liberty Carton in 1918 to refurbish industrial burlap bags and wooden boxes for reuse. Mike worked for his father, Ben, on weekends as a teenager, back when Liberty Carton was on Third Avenue North in downtown Minneapolis. By 1970, when Mike became Liberty’s purchasing manager after graduating from the University of Minnesota, the company was in larger quarters in Golden Valley, having become a successful manufacturer of corrugated boxes and promotional packaging.

Already then, Liberty was looking toward diversification. “My dad saw that if we were just in the corrugated packaging business, we’d be like a lot of people,” Fiterman recalls. “Whereas, when we started combining substrates together”—combining paper with plastic and aluminum and wood—“we could not only provide superior solutions . . . but we could differentiate ourselves,” no longer a “commodity” business but a “solutions” business.

Among the company’s biggest sellers in the 1970s were U.S. Postal Service mail totes (which LDI still produces). It made them from corrugated paperboard, adding a plastic bottom and wire rims. Then, Fiterman recalls, “we discovered that there was this product, corrugated plastic,” that provided a sturdier substrate.

Soon Liberty was buying and building “substrate” companies to enhance its core box-making business. “We still own a large plastic extrusion company,” Fiterman says. “We do a lot of wood fabricating, we do foam fabricating and metal fabricating.” These businesses also have their own customers and products. In 1972, the Fitermans created a holding company for all their operations, Liberty Diversified Industries.

Mike Fiterman decided to take diversification to another level, to “spread our risk” across various industries, he says. LDI’s recent acquisitions have included two makers of computer-numerical-control machines for manufacturers. When Fiterman’s internal acquisition team first brought the idea to him, he was skeptical: “Isn’t machine manufacturing going down in the United States?” In fact, he learned that the precision machine-tools industry was growing 15 to 20 percent annually. The deals were too good to pass up, and one of the companies was based in Taiwan, expanding LDI’s international presence.

LDI has sold off a few businesses that no longer suit its needs or simply haven’t worked out: a plastic-decking business; a mail-order office products operation called Fidelity Products that put LDI in competition with some of its retailer-customers. “We just stayed in the wholesale business,” Fiterman says of the office products company. Called Safco, it’s “now our largest and fastest-growing entity.”

LDI’s most recent purchase, finalized in April 2008, is Ergolet, a Danish manufacturer of mechanical systems to help health care workers lift patients. Fiterman wanted his company to find a place in the growing health care industry. Help came from LDI’s accounting firm. Discovering that Grant Thornton had an international mergers and acquisitions practice, Fiterman asked it to look for a suitable target company.

Ergolet wasn’t for sale, but it was open to being wooed. As Fiterman recalls, “The reason they sold us the business is they were outstanding, and still are, at product development and product design, and hated the administrative side. Hated it!” He says LDI “romanced” Ergolet by assuring the owners that they would be free to focus on design and engineering. LDI also asked Ergolet to design office products for its other divisions—a condition to which Ergolet eagerly assented.

To Fiterman, the acquisition had just about everything. It gave LDI a health care presence, it further broadened LDI geographically, and Ergolet had distinctive capabilities that LDI could leverage across its other divisions. What’s more, Ergolet had strong managers who wanted their company to continue as a distinct entity—a trait Fiterman and LDI seek in an acquired firm.

Business success, he believes, is “not a solo act. You have to have a committed and passionate group of people around you from your leadership group.” That’s particularly true in a family business, where even if the owner’s spouse isn’t directly involved in the business, he or she has to accommodate an entity that’s “like another member of the family,” Fiterman says.

The entity called Liberty Diversified Industries is growing, and Mike Fiterman is involving a fourth generation of his family: son Jack, director of sales at Liberty Carton’s Golden Valley operation, and daughter Ann, working in the company’s training and development department.