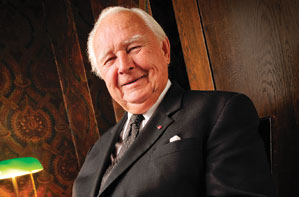 “I had four uncles who were doctors, and I wanted to be a doctor myself,” says Carl Platou, a man who loves to tell stories. “Well, my first quarter at the University of Minnesota, in September 1942, I took organic chemistry, math, physics, zoology, and German. I had three Ds, an F, and an Incomplete. I like to tell doctors that my uncle Erling looked at me and said, ‘Perhaps you should be a hospital administrator.’”

Platou laughs heartily at the joke, and no doubt at the irony as well. He did become a hospital administrator—and then changed the way hospitals are organized and operated, not only in the Twin Cities but throughout the nation. Best known for transforming Fairview Hospital from a single, small institution into what is now a seven-hospital, 90-clinic, metrowide health care system, Platou developed the very idea of multi-hospital systems through which most health care in the country is now delivered.

Though Norwegian American to the bone, Platou has never wanted for chutzpah. Credit that to his parents, who came from Norway with little and struggled through the Great Depression, and to Platou’s harrowing experience as a paratrooper and demolitions specialist operating behind Japanese lines during World War II. No wonder that he wasn’t crushed by his inability to follow in his uncles’ footsteps upon returning to the university after the war.

He concentrated instead on social psychology, then entered the U of M’s new graduate program in hospital administration. By 1952, he was administrator of tiny Fairview Hospital on Riverside Avenue in Minneapolis.

“There were 25 hospitals in the Twin Cities then, and we were the second smallest—in the red and down at the heels,” Platou says. “They couldn’t get anyone else to take the job.”

He wasted no time reinventing Fairview, adding rehabilitation, scoliosis, orthopedics, and in-house psychiatry services. He financed the hospital’s expansion not through traditional fund drives but with innovative bond issues. He also began looking for a way to grow Fairview beyond the city limits.

Military veterans were taking advantage of the GI Bill by the millions and buying houses in the suburbs. “But, to go to the hospital, they still had to drive downtown,” Platou says. “The question was how to extend health care into the new growth areas, where more and more people lived. The existing, mostly nonprofit hospitals couldn’t do it because their assets were concentrated in the city and they didn’t have the money to build something new.”

Platou found a way for Fairview to expand into the suburbs, and his unlikely inspiration was federal bank regulations that had allowed holding companies to form and to operate multiple banks within their regions. Each bank could maintain independent operations and leadership, but the holding company could pool and leverage the assets of all of its banks to finance growth. Platou wrote an article in 1957 for the Harvard Business Review, proposing that the same principles be applied to hospitals.

He also found allies in promoting his idea. Among them were Donald Grangaard, chairman of First Bank System, who joined the Fairview board of directors, and Robert Crabb, the man who managed real estate owned by local retailing fixture the Dayton Company. Dayton was undertaking a revolution of its own in the 1950s, building the world’s first all-enclosed suburban shopping mall in Edina. As it happened, the company had designated 15 acres of its new Southdale development as a “medical zone.”

Northwestern and Abbott hospitals had already turned down invitations to build on the site, but Dayton was intrigued by Platou’s ideas and worked out a deal with Fairview. “That was it,” Platou told a historian years later. “That made us.” The 1965 opening of Fairview Southdale Hospital—billed as the first full-service satellite hospital in America—“set a pattern for other hospitals throughout the nation to do the same.”

During the next 20-plus years, Platou oversaw numerous mergers and affiliations with other hospitals and the construction of new facilities. When Fairview acquired the University of Minnesota’s hospital and clinic in 1997, Platou, though officially retired, played a behind-the-scenes role in finalizing an alliance that had begun with informal discussions 30 years earlier.

And Platou did follow in his uncle Erling’s footsteps in one important way. Now 85, but seemingly indefatigable, he is president of the University of Minnesota medical school Dean’s Board of Visitors and a senior advisor to the Minnesota Medical Foundation, which Dr. Erling Platou—a prominent U of M faculty member and a foster parent to Platou—helped found.

“Uncle Erling and his friends would talk about it over Sunday dinner,” Platou recalls, with another loud laugh. “I thought a foundation was a corset. Now here I am, 70 years later, doing the foundation’s work.”

Platou is a driving force behind the foundation’s effort to raise more than $125 million in private funds to complement state money for a world-class biomedical research park. He shuttles between his campus office and the Minneapolis Club to meet with community leaders and contributors, and has little doubt the fundraising mission will be accomplished.

“That’s what I’m working on now, and we’re going to get it done,” Platou vows. And that, of course, will be another story.