This technology recycler not only beats its competitors—it helps people with criminal records rebuild their lives.
April 01, 2020 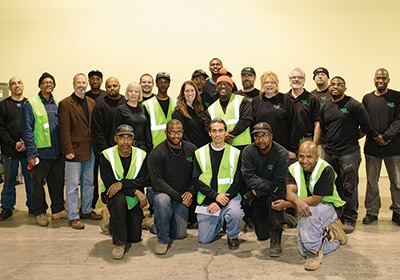 Part of Tech Dump’s mission is to recycle and rebuild discarded electronics. The other part is to rebuild lives.

Once the Golden Valley-based nonprofit collects the digital gadgets and other electronics, it either renovates and resells them at its retail stores, or it removes their components and sells them on the commodities market. The revenue from those activities funds job training and provides work experience to people facing barriers to work. Typically, that barrier is a criminal record.

Tech Dump hires people who have “owned their past” and are ready to change their lives, CEO Amanda LaGrange says. Some of the company’s 45 employees have never held a real job, so there’s extensive training. That training often includes basic workplace “soft skills,” such as showing up on time, taking orders from a boss and dealing with workplace conflict.

The model has proven to be good business. Launched in 2010 as the Jobs Foundation, the nonprofit originally handled all types of unwanted items. A year later, it focused on electronics and rebranded itself. Though prices on the metals inside digital devices have dropped—down 30 percent between 2014 and 2015 alone—Tech Dump has stayed focused on the long term. A careful watch of expenses, including labor costs, have helped Tech Dump outhustle its competitors. Five years ago, there were more than 80 electronics recyclers in the Twin Cities area. Now, only a handful remain in business.

Dan Rogers, principal technology consultant at Eagan-based IT firm Cadan Technologies, says that Tech Dump’s philanthropic mission, combined with its smart business strategy, are what prompted his organization to make it Cadan’s exclusive downstream recycling partner. In the last year, Cadan has sent more than 60,000 devices, with a weight of a quarter-million pounds, to Tech Dump. All told, Tech Dump handled more than 5 million pounds of electronics in 2016.

Cadan Technologies has been working with electronics recycling organizations throughout the state since 1992. Rogers has seen many come and go. He pins their failures on a singular focus on component recycling, which faces the volatility of the commodities market. Tech Dump has what he calls a three-legged-stool approach: “Low labor costs, good recycling processes and [retail store] resale.”

The retail element has been a key factor in Tech Dump’s longevity. It operates two used electronics stores under the name Tech Discounts—one in its Golden Valley headquarters, and a second in Bloomington that opened in November. About 15 percent of the items donated to Tech Dump are refurbished and resold. Refurbished sales now make up about half of Tech Dump’s revenue.

Tech Dump now has aggressive expansion plans, including a goal of doubling the amount it recycles by 2020 and opening several more stores. For every 98,200 pounds of electronics it recycles, Tech Dump can hire one full-time person for a year, LaGrange says.

That job can have a profound effect. She tells the story of a recent employee who came to them with a felony on his record. He drove for Tech Dump for nine months before being hired full time by Metro Transit, which comes with a middle-class wage and union benefits.

“Recycling with us can have a significant impact on someone’s life,” LaGrange says.

People are often defined by their worst day,” CEO Amanda LaGrange says. “But we say [our workers] have something to offer to themselves and society.”

Tech Dump’s model of hiring and providing training to people with criminal records to help them get back into the job market was one reason Dan Rogers of Eagan-based IT firm Cadan Technologies formed a recycling partnership with the company. Rogers was also looking to hire some of Tech Dump’s more skilled workers and offer them higher wages as their next step to entering or re-entering the workforce.