This fast-growing firm lets physicians and other medical staff focus on their patients instead of on data entry.
April 01, 2020 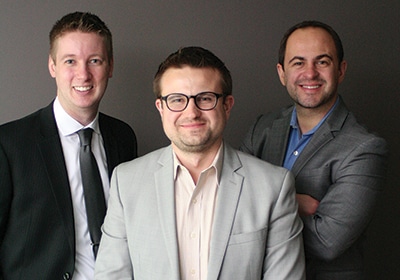 From the massive volume of medical paperwork and electronic health records that health care systems generate, a new profession has arisen: the medical scribe—someone who sits with a doctor and patient, entering information for the clinical records into a hospital or clinic’s IT system. And uniquely positioned to benefit from this burgeoning niche industry is Bloomington-based Elite Medical Scribes.

“Physicians will spend 30, 40, 50 percent of their time during the shift doing admin work, which makes zero sense economically,” says Yuriy Vasylenko, Elite Medical Scribes’ CEO and president. “They don‘t go to school for 11 years to essentially become data entry specialists.” Using a scribe, he adds, allows physicians to see as many as four or five additional patients in a day.

Elite Medical was founded in 2008 by Marcin Kubiak, now its vice president of customer care, and Cody Wendlandt, now the company’s medical director. Vasylenko signed on a year later. All three are University of St. Thomas graduates. Wendlandt, currently in his final year of residency to become a family medicine physician, had worked as a scribe for another company. He and Kubiak believed that there would be growing demand for scribe services, particularly with the rise of electronic health records.

They were right. Elite Medical now provides services in 28 states and works with 33 medical specialties. Its Twin Cities-area clients include HealthPartners and Fairview. In 2016, the company landed on the Inc. 5000 list of America’s fastest-growing private companies, boasting a three-year growth rate of 380 percent.

Elite Medical now has approximately 1,000 employees. Most scribes make about $10 an hour and are pursuing medical careers themselves. That’s a continuing challenge for the business. “Scribes are typically pre-med students. They do this for about a year,” Vasylenko says. “It’s one thing to set up a medical scribe program. But then in a year [or a] year and a half you have to do it all over again.”

To get these short-timers up to speed quickly, the company has developed an intensive online training program. Kubiak says that Elite’s ability to offer scribes for a wide range of medical specialties sets it apart from its competitors. “Medical terminology between the specialties is very different,” he says.

That kind of deep knowledge is appreciated by clients such as Ashley Schempp, division administrator for pediatric hematology and oncology in the department of pediatrics at the University of Minnesota. “Our priority was improving the clinical documentation and freeing up time for the physicians to be focusing on their research and education missions,” Schempp says. “We’ve had a great experience [with Elite Medical]. The scribes fit right into the flow.”

Elite is now working to develop virtual scribing, which would allow a scribe to work remotely from the health care facility. This could help the company provide its services at a lower cost. By allowing physicians to focus less on data entry and more on patient care, “we feel that we truly contribute to enhancing the quality of physician care,” Vasylenko says.

Elite has approximately 1,000 employees, many whom are pre-med students.

Though Elite Medical Scribes is now a fast-growing company, it took a little convincing before the company caught fire. When Elite opened for business in 2008, president and CEO Yuriy Vasylenko says, medical providers were wary of making changes to their systems. Hiring a scribe seemed to be another extra cost.

“Scribing was a very new concept,” Vasylenko recalls of the company’s early days. “It took us almost two years to find the first contract and then another year to get the second.”

Nearly 10 years later, hospitals and clinics have learned that medical scribes can actually increase efficiency and productivity. Physicians spend less of their valuable time on data entry, leaving that to the scribe. In addition, care providers outside the Twin Cities are seeing the value of Elite Medical Scribes’ services. The company works with Massachusetts General Hospital and several university hospitals across the country, including University of California.