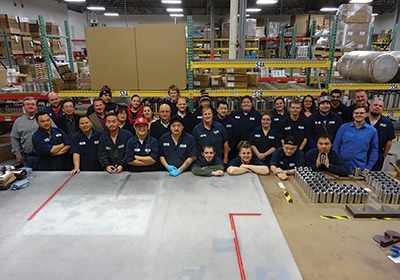 Minnetonka-based Fireaway Inc. manufactures an innovative fire-suppressant technology. Now it has a driven leader who is positioning the company for profits that match the power and promise of its sales. Gonzalo Lopez Davila came on board in 2015 after a 35-year global career in the chemical industry. At his hire, the company had been losing money despite annual sales growth in the 20 to 30 percent range.

Fireaway’s innovative product is Stat-X, a canister-based solid that ignites to create a gas-based fire suppressant. The technology was originally developed by the Russian space program; Fireaway was founded in 2005 to further develop and commercialize it. Commercial and industrial fire suppression tends to be a system of pipes and sprinkler outlets that channel water or halon; the system requires expensive installation and regular maintenance. Stat-X requires no pipes or tubes. And with halon being phased out for its negative impact on the ozone layer and contributing to climate change, Stat-X has plenty of opportunities for growth.

Stat-X is a canister-based solid that ignites to create a gas-based fire suppressant.

But while Stat-X sales had been strong, Fireaway “had grown in an unorganized way since its founding,” Lopez Davila says. “I have focused on creating systems, implementing best practices” to deliver effective results (see “A Controlled Burn”). His five-year plan is to triple company sales. The company’s 2015 revenue exceeded $8 million.

Stat-X is certified for occupied spaces by the U.S. Environmental Protection Agency and for various industrial settings by Underwriters Labs. Stat-X’s customers include power-generating facilities in India and the federal Los Alamos Research Lab. The global shipping industry is now a primary focus for Fireaway and Stat-X.

“A fire at sea is the worst fire, because there is nowhere to run,” says John Farley, director of fire test operations at the U.S. Naval Research Lab in Maryland. “The mix of fuels, ordnance, cabling and ordinary combustibles can lead to devastating outcomes.”

Farley has been testing Stat-X for use on new Navy vessels and as a replacement for halon-based technology. He says the product “is an order of magnitude cheaper” and sells itself, thanks to its low installation cost and ease of maintenance. The rigorous testing the Navy employs benefits Stat-X and its customers. “[Fireaway] can’t afford the kind of R&D we can do, so they are always here and very helpful,” Farley says.

Another potential source of future growth is anywhere lithium batteries are used. These high-tech energy sources power everything from commercial airliners to localized power generators. But they produce heat, and high-profile battery fires in the Boeing 787, the Samsung Galaxy Note 7 smartphone and other products have created massive problems for their manufacturers.

The volatile ignitable component used in Stat-X is manufactured in Louisiana. Final production and corporate staff are based in Minnetonka. The product is sold through a global network of distributors. Construction firms and insurance companies also influence end-user purchasing decisions.

Stat-X isn’t the only aerosolized fire suppressant in the marketplace, but is the only one produced in the U.S. and authorized for occupied rooms. With Lopez Davila at Fireaway’s helm and a world of opportunity, Stat-X sales as well as profits are poised to catch fire.

When CEO Gonzalo Lopez Davila joined Fireaway in 2015, sales of its Stat-X fire suppressant system were blazing—but the company was losing money.

Lopez Davila was charged with righting the ship. The first thing he learned was that users were waiting months for orders, jeopardizing occupancy and licensing of occupied spaces. He slowed the pace of growth to focus more on R&D and process improvement.

“We’ve reorganized operations, mission, customer service,” Lopez Davila says. “We had to re-engineer our production process to handle orders in a timely fashion.” One result: The company has moved from a two-month order backlog to a two-week turnaround.