For four decades, this stringed instrument shop has been in tune with its customers’ distinctive needs.
April 01, 2020 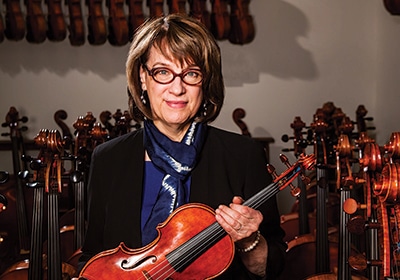 Opening her own violin shop in 1977, Claire Givens entered a male-dominated field composed almost exclusively of violin makers and family-owned shops that had been established for generations.

“I came at it from the perspective of a player,” says Givens, president and CEO of Minneapolis-based Claire Givens Violins Inc. “I think that helps me in terms of understanding my customers and being focused on providing incredible service.” Her business remains small, with annual revenue of about $2 million. But it has prospered for four decades by providing her mostly Midwestern clientele with a level of service and quality of instruments that’s rare in these parts.

Givens was a musician herself and studied cello in Italy in the mid-1970s. She came to realize that she didn’t have the skill to be a professional cellist. But while there, Givens became fascinated with the history of violins and violin-making. When she returned to the U.S., she opened her own violin shop.

Givens’ initial inventory of 11 instruments has grown to 850 violins, violas, cellos and bows. Prices range from $600 to six figures. This breadth of inventory allows her to cater to a broad range of interests and abilities, from entry-level to professional players. “I am the only woman in the world who has a violin shop with the size inventory that we have, with the longevity of being in business,” Givens says. “Every single penny I have earned in the last 39 years has gone into buying inventory. It’s what sets us apart.”

Givens and her husband, Andrew Dipper, travel overseas regularly to handpick the instruments they sell. Italy is among the most popular destinations, since they both have many connections there. “Her selection, which is quite vast, is very carefully chosen and of very fine quality,” says Mark Bjork, professor emeritus of violin and pedagogy at the University of Minnesota School of Music.

All of Givens’ employees are players themselves. “Players who have developed skills and are interested in the business world are extremely challenging to find,” Givens says. So she works to be flexible with hours so that her musician-employees can take gigs.

The professional musicians who are her customers include members of the Twin Cities orchestras. Last year, the Saint Paul Chamber Orchestra borrowed eight baroque bows—a style of bow from the 17th century—for a series of concerts. Those bows came from Dipper’s side of the business, which restores historic stringed instruments. Claire Givens Violins’ main workshop also repairs and maintains modern instruments.

“When a musician chooses someone to work on their instrument, it’s like choosing a doctor—you go where you can trust that you will be in good hands,” Bjork says. “And she has been quite instrumental in breaking the attitude that if you have a fine instrument that needs work that you have to travel to New York or Chicago.”

It’s Givens’ dedication to her customers and her reputation for honesty and straightforwardness that has earned her respect within the community, Bjork says: “She has provided the Twin Cities with a world-class violin shop.”

Taking Her Show on the Road

In 1999, Claire Givens and her husband, instrument restorer Andrew Dipper, began traveling around the country as instrument appraisers for the PBS television program Antiques Roadshow.

A friend who’d been an appraiser on the show asked the couple if it could handle one of the episodes for him. Givens and Dipper traveled to Des Moines to appraise the instruments people brought in, then were asked to do the same for a show in Denver. Happy with their performance, PBS asked them back for the next season.

Since then, Givens and Dipper have done two Antiques Roadshow episodes each summer. This past summer, they traveled to Fort Worth, Texas, and Virginia Beach, Va., to appraise instruments.