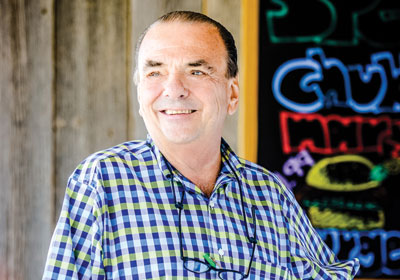 Pete Mihajlov and Phil Roberts go back to their college days at the University of Illinois, where neither recalls they were exactly committed students. Fun was a good thing to have, and they had plenty of it. Then for about a dozen years after graduation, they pursued separate paths, Roberts in creative design, Mihajlov in corporate accounting.

By pure coincidence each migrated to Minneapolis, where one afternoon in the late 1970s they ran into each other and reignited their comradeship. By then, Mihajlov’s job had him frequently traveling to the West Coast, while Roberts’ trips were to the East. “We’d come back to Minneapolis, which was meat and potatoes—good meat and potatoes—but I had just had fettuccini alfredo or quiche lorraine in New York, and we got to thinking, ‘Why can’t we bring some of those good ideas from each coast to the Twin Cities?’ ” Roberts recalls.

1961
Graduates from the University of Illinois with a bachelor of fine arts in industrial design.

2002
Oceanaire is spun off to New York venture firm Clarion.

Roberts in 1941 at his boyhood home in Illinois.

At the now-defunct Pronto restaurant in 1992.

Roberts in Pasadena, California in 1995.

Not long after, he dragged Mihajlov over to St. Anthony Park to look at a not-exactly-thriving bistro then known as the Lamplighter. Distinctly unimpressed, Mihajlov shot the owner a lower-than lowball offer and hopped on a plane to Dallas. By the time he landed, Roberts—the impulsive half of the duo—had closed the deal. The two were in the restaurant business.

Flash-forward some 35 years and they are still in the game, running Parasole Restaurant Holdings, Inc., the stiff corporate name for a collection of remarkably informal, comfortable, and successful eateries that over the years has included Muffuletta (the old Lamplighter), Pronto Ristorante, Figlio, Buca di Beppo, the Living Room, Prohibition, Good Earth, Oceanaire, Manny’s, Mozza Mia, the Uptown Cafeteria, Pittsburgh Blue, Salut, Chino Latino, and Burger Jones. Buca and Oceanaire were eventually sold off, but Parasole continues to flourish in a business with an appalling mortality rate—in part because the irrepressible 74-year-old Roberts continues to globe-trot, consuming cuisine and sponging up ideas like a hot slice of ciabatta dipped in rich marinara sauce.

Roberts has no idea how many people he’s employed over the years. But one can do some basic math to determine the job-creation impact of his creative genius: Parasole currently employs 1,500 people, and he figures the Buca and Oceanaire chains employ about 5,000. He doesn’t disclose his privately held company’s earnings, but he is willing to reveal that it expects to generate $65 million to $70 million in revenues this year.

The umbrella theme for all Parasole restaurants—whether the modulated hippie/vegan vibe of the Good Earth, the laid-back French feel of Salut, or the tongue-in-cheek Masters of the Universe cachet of Manny’s—is “contemporary adult,” Roberts says. Freely translated, this means a certain informal, with-it hipness.

In his hardly regal corporate office in the back of Salut in Edina, Roberts narrates his career story with the help of a PowerPoint presentation. “I’ve got over 59,000 images in here,” he says, punching up photos he’s taken of delectable puffs and fritters, fowl and fish from all over the world, mixed in with shots of his wife, staff, and him merrily dining in France, Argentina, and so on. Clearly, it’s been a good gig.

Roberts describes himself as the kind of restaurant customer “who doesn’t want to go to a place where I feel inferior to the restaurant, where I have to worry about mispronouncing a French word or not wearing a Brioni suit.” That perspective imbues everything Parasole has created.

Mihajlov and others, including competitors (who don’t want to be quoted saying so) call Roberts a creative genius for his ability to cull details of dÃ©cor, menu, and essential bits of the foodie zeitgeist to create and sustain his concepts. He has no problem conceding to anyone who asks that he is not a chef. Rather, he’ll say he is a true connoisseur, without the, shall we say, continental affectation. He understands the emotional responses people have to environment, sound, lighting, the theater of service—as well as food, which is another way of saying he’s made an art, and an excellent business, out of knowing what makes people comfortable and happy.

“He has a God-given talent,” says Mihajlov. “One of the traps a lot of people fall into in this business is thinking they can try anything. But it’s a lot tougher than that. You have to have a real feel for what’s relevant in the marketplace. And Phil has that. Maybe because it’s his sole focus. Everywhere he goes, everything he does, everything he thinks about is the business. And he’ll never stop. He’ll be carried out of here in a box.”

It’s no surprise that such focus—matched with an affinity for the sensory arts—begets roguish humor. Roberts has several well-polished stories, including the one about pushing a prissy portrait artist to lend ever more heft and sheen to the scrotum of the bull adorning the dining room wall at Manny’s. There’s also the tale of having his face—with a horrified “Man, oh man, I do not want to be here” look—Photoshopped on to the body of one of General MacArthur’s aides in a historic photo as they slog through the surf to the Philippines shore. The photo is on display at Manny’s in downtown Minneapolis.

“That’s Phil,” says Mihajlov. “He has a sense of humor that is somewhere out there over the edge. It’s part of being a risk-taker. He’s not afraid to be sacrilegious. He understands that any good experience involves having some fun, and that there’s a lot of show to this business. Every day you’re open it’s like putting on a brand-new play.”

Roberts boils down his success to an ability to observe. “I don’t want to come off as all self-deprecating, but I’ve never been really smart. I had bad grades in high school. I was on and off academic probation three times in college. I had a short attention span, or something,” he says. “But I think I learned how to see,s primarily in the college courses I did well in, which were in the fine arts. So in spite of myself, I just became very visually oriented.”

“You eat first with your eyes,” he says, clicking on an iPhone shot of a succulent-looking glazed chicken. “I see something like this, and I think, ‘Well, I know there’s such a thing as Peking duck. But is there Peking chicken? Could we put a glaze on a chicken?’ ”

The staple of the Roberts’ concept, though, is relaxation and a comfort zone. “When we started Buca, all the Italian restaurants were sleek and slick, with marble and beveled glass and granite and all that, so I said, ‘You know? I want a sleeves-up restaurant where the guest feels superior to the restaurant, rather than being looked down on.’ That’s why the interiors of Buca are so tasteless.”

He like to tell the story of following a couple out of the Eden Prairie Buca and overhearing the wife, after observing “some god-awful piece of Roman revival statuary” turn to the husband and whisper, “I would never have a piece like that in my house!” “And I thought, ‘Yes! Yes! Yes! We did it!’ ”