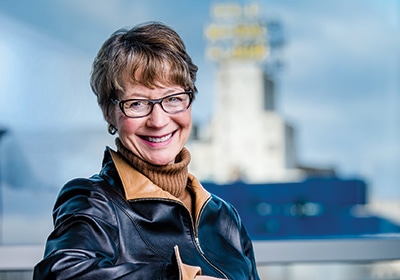 Lynn Casey has been a high-profile success story in the Twin Cities business world for three decades. And she has succeeded largely by being low-profile in her leadership style.

As chair and CEO of Minneapolis-based PadillaCRT, Casey has transformed the local PR firm formerly known as Padilla Speer Beardsley into a national branding and communications powerhouse. Most of that expansion has occurred in the past five years. But she credits her colleagues for making that growth possible.

“Lynn is a very quiet and very subtle leader,” says Sarah Caruso, president and CEO of Minneapolis-based Greater Twin Cities United Way. “She prefers not to be out front. She doesn’t have ‘charge-up-the-hill’ leadership. Rather, she is a facilitator and a listener.”

Caruso credits Casey, who recently completed a term as the organization’s board chair, for “making me a better leader.” Casey’s quiet, thoughtful style has helped the United Way board take a “balanced approach to some of the toughest issues in the community,” Caruso says.

Casey also has served on the board of the University of Minnesota Foundation. “She absorbs the topic first,” says board colleague Mike Fiterman, chairman and CEO of New Hope-based packaging manufacturer Liberty Diversified International. “Then when she has something to add, she asks it in such a professional way that many times you say, ‘Huh! Why didn’t the rest of us think about that?’ ”

Even with her very full plate leading PadillaCRT, Casey makes time to take on major nonprofit commitments. “Giving back to the community is in our organization’s DNA,” Casey says. Spoken like a quiet leader.

Lynn Casey was inducted into TCB’s Minnesota Business Hall of Fame in 2014. Read the story at bit.ly/2ibS1hj.

First experience as a leader
I was the editor of my junior high school newspaper. There was a writer who covered sports. This particular person was better on the field than he was a writer. I did a full rewrite of his first sports story. When he saw it, he came up to me and said, “I was hoping we could have sat down and explain why you pretty much hacked up my story.” It turned out that his dad was a sportswriter, and he really wanted to do well. That was the first time that I was really exposed to the notion that people wanted constructive feedback.

Hardest lesson
Several years ago, I pushed a really talented person through the hiring process over the objections of some of the senior leaders. I was looking to build a new capability, and this person was an absolute fit for the job in terms of expertise, but was not at all a fit for our culture. Fortunately, a few of the folks here made sure that I was aware of that poor cultural fit. When you want something so badly, sometimes leaders can put their blinders on.

Proudest accomplishment
Three professional marriages over the course of two and a half years, and from a company that had not made an acquisition since 1987. That was and still is a really big deal. Our first acquisition tripled the size of our New York office and also added other geographies.