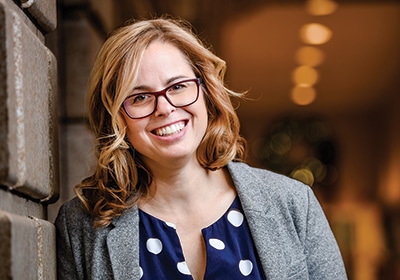 Carrie Cisek firmly believes in continuous improvement, and she’s always seeking novel ways to do things that further business and employee objectives. GovDelivery CEO Scott Burns saw Cisek in action when they worked at another company, and it’s why he hired her to lead human resources.

“Carrie looks at things with fresh eyes, and that’s intertwined with bringing a lot of humility to each situation,” Burns says. “She doesn’t assume she has the best answer. She goes out and listens and talks to people until she finds the best solution. She believes that every single thing in this business could be better. That’s really an asset when you’re trying to grow.”

Cisek also has been contributing her talents beyond her office. In 2015, she joined the Ramsey County Workforce Innovation Board. And last year, Cisek joined the tech team of Make It. MSP. It’s an initiative of metro-area economic development organization Greater MSP that partners with employers to help the region maintain its competitive advantage. Maintaining such an advantage is something she knows very well.

First experience as a leader
I was a competitive gymnast, and I went to a small school where I could be a class president and captain of different sports teams. Through sports especially, I learned perseverance and resilience, and the strength to deal with setbacks. It really helps with coaching and taking and giving feedback. You learn fortitude and how to encourage team members and provide support.

Hardest lesson
We were rolling out some stock options at the first start-up I worked at. Some people weren’t all that enthusiastic about the additional shares they were receiving. The CFO told me, “You can give everyone a brick of gold and someone will complain that they have to carry it to their car.” It caught me off guard that someone would be dissatisfied. I was disappointed because I thought it was a win. Now I don’t take it personally—it’s just human nature. It’s impossible to please everyone.

Greatest challenge
We’re going through a merger right now. I think that will be the greatest challenge of my career. There is a lot for us to sort out in a short window of time. We want to make sure we’re making decisions that are well-received and keep the trajectory of our business on track. It would be easy to make some missteps that could derail or demotivate employees. I hope we raise the bar with best practices from both sides, and that there are real, tremendous benefits from this new entity.