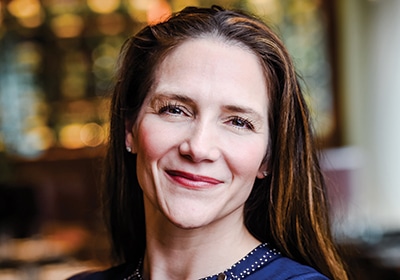 It was one of the business lessons Christine Lantinen learned in the Army Reserves: Make your team look good. “It’s not about one person standing out,” she says. “It’s about us being great as a group.”

In the 12 years since Lantinen became owner and president of Minneapolis-based Maud Borup Inc., she has made a lot of her clients look good—and her clients’ customers very happy. Maud Borup manufactures and assembles food gifts filled with confections, candy, hot-beverage mixes and other food items for a variety of retail clients. These are mostly seasonal items packed with products from well-known brands.

One of those clients is St. Paul-based Pearson Candy Co., which has supplied Maud Borup with salted nut rolls for Borup’s Valentine’s Day “golf mug” gift package, which retails at Target Corp. Lantinen’s firm also has helped with specialty product packing and packaging. “They are a creative and value-added partner of ours,” Pearson’s president and CEO Michael Keller says. “They don’t simply pack a product or recommend a piece of packaging. We work with them on the solutions that we need and the solutions that they need.”

Keller and Pearson plan to do more business with Maud Borup in the coming year. And they’re not the only ones. To accommodate her growing business, Lantinen is expanding her production and assembly facility in Le Center, Minn., Lantinen’s hometown. She also recently installed a wind turbine to power the plant.

First experience as a leader
I joined the Army Reserves when I was 16. By the time I was 18, I was training “pre-basics” at my unit to prepare them for basic training. A lot of them were going to war following basic training—preparing them on how to march, how to do military pushups, how to tear down and reassemble an M-16 in less than four minutes, how to salute. Most of them were 16- to 18-year-olds. They were peers to me at the time, and I cared a lot about them as people, and I wanted to train them the best way possible. I think that taught me how to look out for each other, how to have each other’s back.

Hardest lesson
I feel like every day I learn lessons. I make mistakes. And whenever you start to feel as though you’re on top, it takes only one event to bring you down. So I don’t take anything for granted. It can all be gone in an instant.

Proudest accomplishment
We’ve worked very hard to be a sustainable company, and that’s something both my husband and I are passionate about. We have over 30 things that we do as a company to be sustainable. The biggest thing is this: We just erected a 92-foot-tall wind turbine at our facility. As of the first of [this] year, it will start powering our Le Center plant. We’ll sell the rest of the energy it generates back to the city.