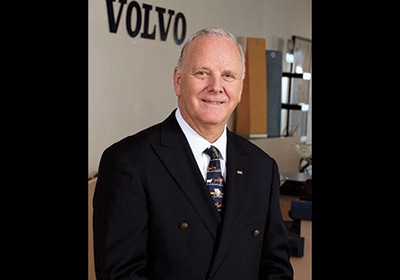 Fresh out of high school in Norway, Kjell Bergh spent 13 months traveling across the United States, taking odd jobs and writing freelance articles on automotive subjects for Norwegian publications. After returning to his home country and spending a semester at the University of Oslo, he returned to the United States for the summer. On his way to Seattle, he stopped in Minneapolis to visit his brother. He never left.

Looking for temporary work, Bergh ended up at Borton Volvo. Three years later, he was general manager; two years after that, he was sole owner. “Oscar Borton, the owner, was the son of a Norwegian immigrant who started the dealership,” says Bergh, who changed the company name to Borton Automotive Inc. years later for trademark reasons. “He financed the bulk of the purchase price, and I paid it off through earnings.”

Thanks to Bergh’s heritage and his position at Borton, he found himself on the planning committee when Norway’s King Olav visited Minnesota in 1968. He has provided automobiles, and occasionally planes, for visiting members of the Norwegian and Swedish governments and royal families ever since.

Over the years, Bergh, 68, built and operated four Volvo franchises and one each for Pontiac, Saab and Volkswagen. After selling dealerships in Rochester, Minn., and Delray Beach, Fla., only the franchises in South Minneapolis and Golden Valley remain, the latter of which also sells the Fisker Karma, a hybrid-electric luxury sedan. For most of the past 40 years, he has been the largest U.S. dealer of new Volvos to Americans traveling in Europe.

“Berg’s love affair with Tanzania was kindled 40 years ago when the Swedish ambassador to Tanzania invited him to spend two weeks at the embassy residence.”

Bergh’s entrepreneurial entrÃ©e into the travel business was unintended. As he fielded one request after another from clients who wanted him to plan their trips, he recognized an opportunity to combine business with a lifelong love of travel and global adventure. In 1986, Bergh bought a travel company and became the major shareholder in Serengeti Select Safaris and Tarangire Safari Lodge in Tanzania. After cashing out of both in 2005 due to disagreements with his partners, he purchased Norway’s Trollstigen Resort in 2008. Today, Borton Overseas’ three-pronged focus is Scandinavia, east and southern Africa, and small-ship cruises. “We have terrific teams at both Borton Automotive and Borton Overseas, and I do not spend much time on operational detail,” he says. “I focus instead on long-term strategy and overview.”

Bergh’s love affair with Tanzania was kindled 40 years ago when the Swedish ambassador to Tanzania invited Bergh and his then-wife, a Tanzanian native, to spend two weeks at the embassy residence. A friendship with the Tanzanian ambassador to the United States, who later became the country’s first democratically elected president, led to Bergh’s appointment in 2000 as honorary consul of the Republic of Tanzania. His responsibilities range from hosting events for Tanzanian government officials visiting Minnesota to dealing with visa issues to assisting seriously ill citizens of Tanzania living here to directing foreign investment in Tanzania.

Bergh is active in civic and charitable organizations in each of his “three home countries”—the United States, Norway and Tanzania.

Bergh was nominated by James Thomas, CEO of  Bloomington-based insurance brokerage Life Group America LLC. “Kjell has dedicated himself to advancing democracy and economic development in Tanzania and South Africa for many years,” Thomas notes. “He has encouraged travel to developing nations and built strong relations in Europe and Africa that are beneficial to Minnesota business and institutions of higher learning.”

Bergh earned a master of arts in international relations from Tufts University in 2004. Nine years earlier, he earned some real-world diplomatic credits when he initiated and led a delegation to Japan as chairman of the American International Automobile Dealers Association. He was instrumental in resolving a significant trade dispute.

After 47 years at Borton, Bergh sees the pros and cons of spending his career with one company. “The strength is that you develop a deep understanding of the company, ,” he says. “The disadvantage is that you haven’t seen how other companies do things, so you are committed to a trial-and-error learning curve.” TCB

Phil Bolsta is a longtime contributor to Twin Cities Business.