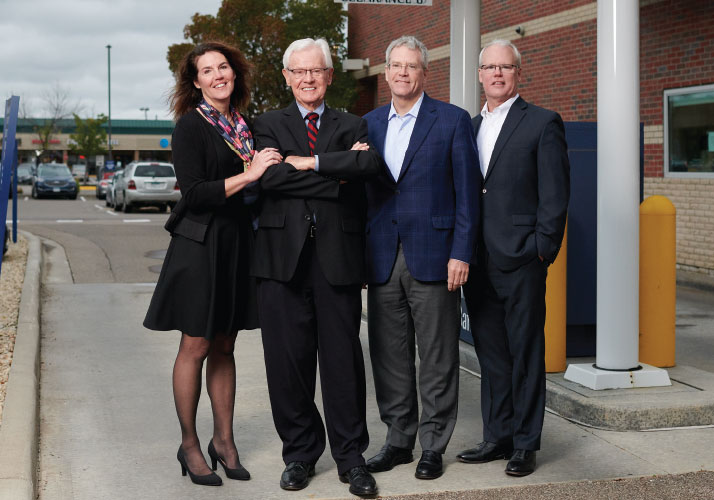 For the Wall family, communication is key to running a family business and weathering economic challenges.
By Dan Niepow
| April 01, 2020
Acceptance SpeechProfile Video

The financial crisis that began in 2007 hit St. Michael–based Highland Bank hard. Real estate lending had long been a mainstay for the small family-owned bank. At one point, there were fears that Highland itself would go out of business because the losses were so huge, says John Wall, one of the three family members who own Highland. “It was bad all the way around,” he recalls. “It was bad to see our valued customers just kind of hopeless.”

Taking vacation
Each year, the Walls take a family trip where business discussions are off-limits. That wasn’t always the case, though; Rick Wall says the vacations used to be a mix of “business and fun.” To keep family bonds strong, the Walls now leave all business discussions at home or in the boardroom. Highland Bank execs also meet separately at five annual board meetings.

Broadening business
Since the financial downturn in the late aughts, Highland has broadened its scope of business beyond real estate lending. Rick Wall says the company is now a “business lending generalist” with a more balanced portfolio, which includes small business lending.

Loans, deposits continue to grow
As of December 2018, Highland Bank counted nearly $400 million in total deposits, up from $360 million in 2014. The amount of total loans has been on the rise, too, growing nearly $100 million over the same time period.

But the Wall family, which has owned and operated the bank for more than four decades, pulled together and pushed through. During the recession, family members began weekly phone calls to talk through issues as they arose. They looked for ways to help get customers back on track. And they had to make some tough choices to get by.

“Things were unstable, and we were trying to talk through everything rather than piecemealing information,” says Rick Wall, Highland’s CEO since 2000. The tradition of weekly phone calls has continued to this day. It’s emblematic of how the family approaches business challenges—by communicating and problem-solving, not finger-pointing. Today, Highland has more than $530 million in assets and five locations in the Twin Cities metro area.

As a community bank, Highland Bank has served a number of family businesses over the years; Rick Wall has seen some of those companies begin to break down when they’ve started infighting. The Walls have taken great care to keep family functions separate from business ones. That has likely helped Highland weather its most difficult challenges over the years. Rick’s sister, Elizabeth Wall Lee, vice president of acquisitions with the Wall Cos., says that her brother always “kept a cool head and kept everybody together.” In her view, Rick Wall was a big reason Highland Bank weathered the Great Recession.

“I credit Rick with keeping the family together,” says Lee, who was appointed bank director in 2008. “He explored every avenue, and he had to make a lot of tough decisions.”

Established in 1943, Highland Bank remains focused on business lending. Real estate lending is still a key part of the bank’s portfolio, along with commercial loans and government-backed loans. The U.S. Small Business Administration (SBA) has named Highland a “preferred lender,” which helps high-volume lenders fast-track approval of government-issued loans to small businesses. In August, the SBA honored Highland for the highest participation in SBA-backed loan programs among lenders with $500 million to $1 billion in assets. Aside from business lending, Highland also works in consumer banking.

Rick Wall’s father, Fred, took sole ownership of the bank in the mid-1970s. Highland has remained in the Wall family ever since. In 1995, Highland merged with Security Bank Northwest, which had offices in St. Michael and Maple Grove. Later the bank acquired Ridgedale State Bank, adding a branch in Minnetonka.

The family has instituted an internship program to help integrate new family members, if they’re interested. The program is designed to give interns a taste of the bank’s inner workings, from financial analysis to customer service. But the Walls emphasize that family members aren’t obligated or expected to join the bank when their internship is done. In fact, it’s the opposite: Interns are encouraged to go out into the world and get some other work experience before coming back.

Take John Wall. He interned with the bank in the early 1980s before taking a job with Pillsbury. That role led him to Fresno, Calif., where he launched a construction business with a friend. He didn’t sign on as a Highland Bank board member until 1997.

“If you’re working in family business, there’s always concern there may be favoritism in one way or another,” says Rick, who was appointed chairmain of the board in 2014. “We’re hoping that by building a career yourself that you’ll have confidence and know you’re moving forward because you earned it, not because it was given.”

Meanwhile, customer service remains a top priority for the Walls, and observers have taken notice. The bank has earned a Top 20 designation from Independent Banker three times. Last year, Highland received the Minnesota Keystone Honored Company award from the Minneapolis Regional Chamber for its charitable giving and community contributions.

In Rick Wall’s view, it all boils down to the benefits of banking with a small, family-owned business. “We sit down and listen, and that’s important to businesses,” he adds. “Our money is the same color as the big banks.”