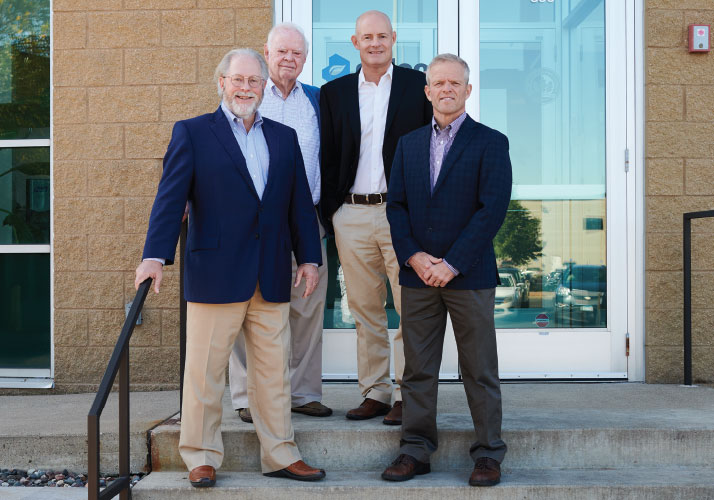 As it celebrates its 60th anniversary, this facility maintenance supplies distributor is looking toward a future of more automation, greater efficiency—and even floor-cleaning robots.
By webpublisherpro
| April 01, 2020
Acceptance SpeechProfile Video

After the Mall of America has closed for the night, it’s time for the robots to come out. Like supersized Roombas, the machines clean the floors in some of the mall’s most expansive areas.

How does Dalco stay on top of the technology trends in the janitorial sanitation industry? It’s not just one family member’s job. “Myself, [brother] Peter, and [brother-in-law] Rod are all very aware of technology advances,” company president Ted Stark III says. “We each focus primarily on our own area of expertise, but also think about all areas of the company and keep our eyes open for new technological ideas that might be valuable for our company or our customers.” That said, Stark’s father (who started as a shareholder in 1960) “is not technological at all. He still keeps track of key data on 17-column handwritten work papers.”

Dalco has been owned by the Stark family since 1969, when then-company treasurer Ted Stark Jr., who became a shareholder in 1960, bought out his partners to become sole owner of the firm. His son, Ted Stark III, is now company president. With eight locations in three states, Dalco has major niches in hospitals, long-term care facilities, and education, especially K–12. “Anyone who has to clean a facility or an office can be our customer,” Ted Stark III says.

Floor-cleaning robots aren’t the only high-tech changes to enter what has historically been a low-tech industry. “Automation, computerization, and smaller, easier-to-handle packaging are all crucial in this market,” Ted Stark III says. Public restrooms, for instance, have become increasingly tech-driven. “From the toilet to the sink to the paper towel dispenser, it’s pretty much a hands-free experience,” Ted Stark III says. Soap dispensers can automatically signal when they’re running low. “That way, the facility manager doesn’t have to require the staff to check on dispensers, and eliminates them from being refilled when they’re only half-empty,” he adds. Dalco offers those hands-free dispensers.

The family that owns and runs Dalco needs to be innovative and tech-savvy to stay competitive. Historically, the janitorial sanitation business was made up mostly of family-owned, regionally based distributors—companies like Dalco. But in recent years, the industry has seen consolidation, as well as crossover marketing efforts from some big new competitors. Those new players include office-products chain Staples, Illinois–based food service distributor US Foods, and medical products supplier Cardinal Health. According to Ted Stark III, the internet has driven much of this new competition, making it easier for these multibillion-dollar entities to add sanitation products to their offerings.

The Dalco team in the early years.

But Dalco has some competitive advantages. “Dalco is a large and successful player in their market, but I believe their family culture and customer-focused approach allows them to be nimble and still leverage the benefits of scale that they enjoy,” says Dennis Kortsha, commercial market manager at Tennant, which has worked with Dalco for at least 20 years. “They have a sales force and infrastructure that serves customers in a pretty wide geography,” he adds. “They also do an excellent job of presenting, demonstrating, and selling Tennant machines as part of a larger offering that includes related products like floor finishes, cleaning, and janitorial products.”

Tech-driven efficiency is part of that. “Dalco was the first distributor in the country to make a sale of our new T7AMR,” Kortsha says. That, too, points to the distributor’s knowledge of its customers and the solutions they require. “In a tight labor market, it’s difficult to find enough qualified workers to get everything done,” Kortsha adds. “What we’re finding is that the robotic cleaners allow customers to count on their floors being scrubbed as often as they need it done, while freeing up their staff to do other important cleaning duties.”

Dalco also differentiates itself by helping its customers use its chemical products more efficiently. “A lot of our focus is actually helping our customers use less of our products,” Ted Stark III says. That might seem counterintuitive, but the way Dalco sees it, less is more—and more potential business. “We provide the value-add of training and education on proper use, and then, hopefully, we can get a bigger bundle and provide more services and products,” Ted Stark III says. “Our customers appreciate that.”

The day-to-day business at Dalco is led by the triumvirate of Ted Stark III, his brother Peter, and his brother-in-law Rod Dummer. “Dad trusted us to make good decisions and talk to each other, and that freedom was key to our success,” Ted Stark III says. “We each have our own area of expertise. I oversee finance and accounting, my brother is in charge of operations, and my brother-in-law handles sales and marketing. We try not to get in each other’s way.”

Thus far, no definitive plan for succession is in place. “I’m 62,” Ted Stark III says. “But it’s hard for me to think about retirement when my 89-year-old father still comes into the office every day.”

In any case, the family’s longevity and the company’s long history give them advantages in an increasingly competitive industry. “There are risks when you aren’t cleaning properly,” Ted Stark III says. “So why would you want to buy cleaning products from the same guy you buy frozen shrimp from? We offer expert advice and knowledge, and that’s what our customers need to keep their customers, employees, students, and patients safe.”