Heartland Region Winners Based Outside Minnesota 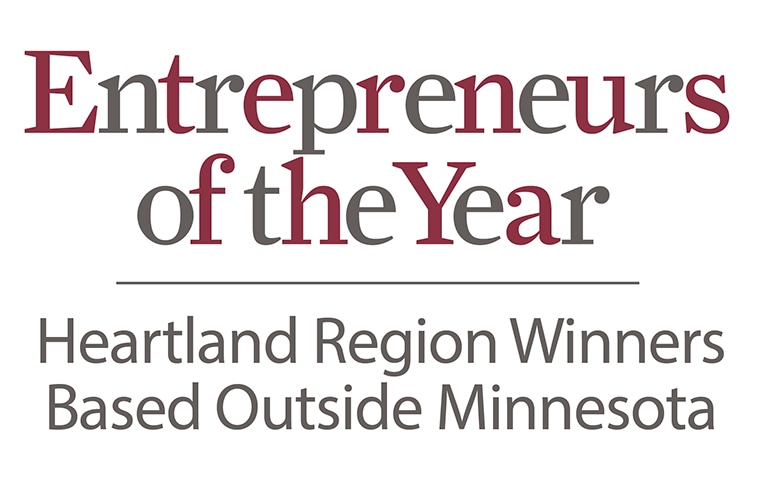 Founded: 2009
Headquarters: St. Louis, Mo.
Employees: 300
Mission: Abstrakt is a B2B marketing company offering sales and marketing management solutions striving to achieve new business growth for all of its clients spanning several industries nationwide.
Major impact: Scott Scully didn’t take a salary for several years to build the business from one client to more than 600. Revenue has more than doubled in the past five years. Management’s openness to new ideas and on-demand training has yielded high employee retention. Scully also led the selection and revitalization of a historic downtown St. Louis riverfront building for the company’s headquarters.

Founded: 2008
Headquarters: St. Louis, Mo.
Employees: 500
Mission: As a full-service brokerage firm, it offers a wide array of financial products and services to its clients and financial consultants.
Major impact: Tad Edwards left the family business, A.G. Edwards, after it was sold to Wachovia in 2007 to start this venture from his savings. Wholly owned by its employees and executive group, the firm has 65 offices in 26 states and more than 240 advisors. Using third-party trade processing and technology platforms enables the firm to compete head-to-head with larger competitors. It realized average annual revenue growth of 15.1 percent over the past three fiscal years and year-over-year growth of 23 percent in fiscal 2017.

Founded: 2002
Headquarters: Andover, Kan.
Employees: 600
Mission: Increase stockholder value and generate consistent earnings growth by expanding the commercial banking franchise both organically and through strategic acquisitions.
Major impact: Equity has grown by purchasing 18 small community banks, retaining most of their employees, and continuing to serve their communities with 48 branches across Arkansas, Kansas, Missouri, and Oklahoma. Equity gathers deposits in local communities and deploys funding into higher-growth lending markets, making it one of the fastest-growing banks in the country. Following its two most recent acquisitions in May, Equity reported about $3.6 billion in consolidated total assets, $2.4 billion in loans, and $2.8 billion in deposits.

Founded: 1958
Headquarters: St. Louis, Mo.
Employees: 300
Mission: A third-generation company, Luxco started as a distributor and private bottler, expanding into production, importing, and marketing of alcoholic beverages. The company steadily built its portfolio from one brand in 1960 to nearly 100 today.
Major impact: Donn Lux has led the family business through several changes since taking over in 1995. A decision to market a lesser-known rum to distributors spurned during industry consolidation led to 400 percent growth. Selling that rum brand in 2000 yielded $200 million. Revamping the business model five years ago has resulted in new brands and 20 complete brand refreshes. Luxco is now one of the St. Louis metro’s largest privately held companies.

Founded: 1934
Headquarters: St. Louis, Mo.
Employees: 600
Mission: Major Brands distributes beverage alcohol to more than 9,000 retailers in Missouri with a portfolio of more than 11,000 items. It is the nation’s largest wine and spirits distributor owned and operated by a woman.
Major impact: McCollum took over as CEO of Major Brands following the death of her husband, Todd Epsten, in 2012. She overcame major legal and business challenges and redefined the distributor’s role as the expert on the local market and the brands competing within it. Major Brands is a thriving business today. The company has realized 38 percent growth in revenues over the last three years, and 67 percent growth in profitability.

Founded: 1941
Headquarters: Atchison, Kan.
Employees: 320
Mission: Publicly owned MGP produces and supplies distilled spirits and specialty wheat protein and starch food ingredients. It is a leading U.S. supplier of premium bourbons, whiskeys, distilled gins and vodkas, and is the largest U.S. supplier of rye whiskey, distilled gin, and specialty wheat proteins and starches.
Major impact: Cray and Seaberg (granddaughter of founder Cloud Cray Sr.) returned control of the board to the family in 2014, hiring experienced industry executive Griffin to turn the company around after a difficult period. Griffin changed MGP’s strategy from primarily producing low-margin industrial alcohols to a key producer of high-quality beverage alcohol for many premium brands in the industry. Net income for 2017 was $41.8 million or $2.44 per share, up from $31.2 million or $1.82 per share in 2016.

Founded: 1892
Headquarters: Topeka, Kan.
Employees: 1,300
Mission: SBL Holdings (Security Benefit) is a Kansas life insurance company offering fixed- and variable-rate annuities and mutual funds to the U.S. market.
Major impact: Kiley became CEO in 2010 after he and other investors bought the struggling company. Despite the company’s poor ratings, Kiley retained existing agents, recruited a committed and knowledgeable sales force, and moved away from selling through big banks to focus on regional banks and independent marketing organizations. He also led the company to reduce administrative costs by 30 percent. The company’s ratings rose, and as of Sept. 30, 2017, it had approximately $37 billion in total assets under management.

Founded: 2012
Headquarters: Leawood, Kan.
Employees: 700
Mission: Tallgrass Energy transports crude oil and natural gas from the Rocky Mountains, Upper Midwest, and Appalachian regions through its more than 6,700 miles of natural-gas pipeline and about 760 miles of crude oil pipeline to major demand markets in the Rockies, the Midwest, eastern Ohio, and points beyond.
Major impact: Dehaemers is a serial entrepreneur with legal and accounting training. Under his leadership, publicly traded Tallgrass has built a portfolio of integrated transportation, storage, terminal, water, gathering, and processing assets. For example, Dehaemers converted one pipeline that others thought was worthless into the largest east/west bi-directional pipeline in the country. Tallgrass more than doubled pipeline capacity for some assets.