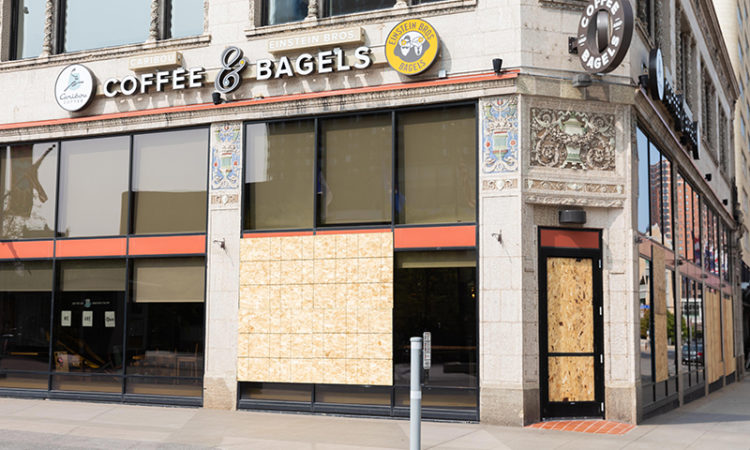 Minneapolis businesses and residents can expect to see more patrols by National Guard members and police officers as the city braces for the trial of Derek Chauvin.
By Dan Niepow
February 24, 2021

Minneapolis city leaders on Wednesday outlined plans to ramp up security along key commercial corridors ahead of the trial of Derek Chauvin, the Minneapolis police officer involved in the killing of George Floyd.

Though the officer’s trial isn’t slated to start until March 8, city officials said they’re beginning prepwork as soon as this week.

“Our businesses and residents along main commercial corridors … can expect to see high-visibility patrols that would include local police and our National Guard soldiers,” said Erick Fors, deputy chief of patrol for the Minneapolis Police Department. Those main corridors will include Lake Street — the site of major property damage in the wake of Floyd’s death in May — as well as Washington Avenue, Broadway Avenue, and Nicollet Mall.

Fors said there will also be “fortification efforts going up around key infrastructure and police precincts over this week and weeks to come.”

Should business owners do the same? Maybe. The city is allowing businesses to put up temporary boarding if they choose to, but leaders didn’t make a firm recommendation.

“We are not recommending that people board up. Each business will have to make its own decision,” said Erik Hansen, the city’s director of economic policy and development. “If they do choose to take those security measures or precautions, we’re here to help them.”

But Hansen did suggest that business owners reach out to their insurance companies about what’s covered, should any property damage occur.

“We’ve been encouraged to have businesses check in with their insurance companies about their policies,” he said. “The city has some resources available if businesses need support.”

Business owners might want to consider moving “sensitive documents” to the cloud, or to a safer physical location, if possible, Hansen added.

It’s not yet clear what the Chauvin trial will bring. But unlike last spring, city officials this time have a longer lead time to prepare for any potential unrest.

“The main asset that we have going into March and April that we did not have in late May and early June of 2020 is time,” said Minneapolis mayor Jacob Frey. “We’ve had full time to plan — and that goes back to late summer, beginning in August. We were working diligently with our mutual aid and state partners to ensure that safety was a top priority leading into the trial.”

That eventually led to a December request for National Guard support ahead of the trial, Frey noted.

Earlier this month, Frey held another press conference to give residents an update on the intersection of 38th and Chicago, where Floyd was killed in May. The city is currently mulling two options for the intersection, which was the scene of heavy property damage in the wake of Floyd’s death.