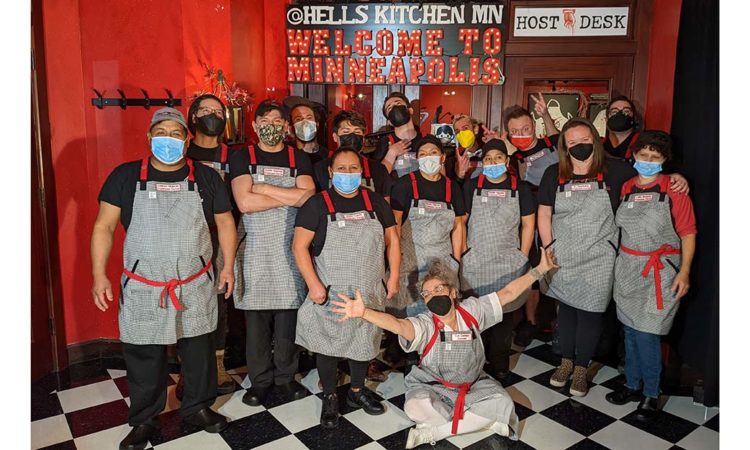 The longtime restaurateur plans to retire after she launches one final concept in February.
By Winter Keefer
January 20, 2022

The founder and longtime CEO of Hell’s Kitchen Minneapolis has announced she will leave her position after one “last hurrah” — a new restaurant concept slated to open in late February. She’s steadfastly mum on details right now, but insists she really will step down after seeing the soon-to-be-announced project through and handing it off to her team.

“I’ve been trying to retire since 2019, then Covid hit right after I turned the company over to the employees,” Gerdes said. “I was just like, ‘Are you kidding me. I can’t get out. I’m stuck in Hell.’ But the truth is everybody knows I don’t know when to stop.”

Gerdes, her husband Mitch Omer, and their friend Steve Meyer opened Hell’s Kitchen Minneapolis in 2002. Though Gerdes has remained the restaurant’s CEO, it is now 100% employee owned under an “employee stock ownership plan,” or ESOP, which allows employees to own shares in the business.

She noted it’s difficult for a restaurant to get approval to become an ESOP due to high turnover rates. But Hell’s Kitchen Minneapolis had about 6 percent to 7 percent turnover rate in the years leading to the 2019 ESOP, far below the average turnover for restaurants, she said.

Hell’s Kitchen Minneapolis “is more than a family,” Gerdes said of the restaurant’s dedicated staff. The business also offers its employees benefits and advancement opportunities.

“You don’t get into this business to get rich,” she said.

After the ESOP went into effect in 2020, Gerdes stayed on to help guide the new leadership through the pandemic.

“The retirement news really isn’t about me,” she said. “What’s interesting to me is how hard it is for a business owner to retire when the restaurant is an ongoing concern.”

A business owner can’t just leave the keys and walk away. Over the last two years, Gerdes said she has worked to teach the incoming leadership about all aspects of running a business, including the ins and outs of insurance and how to apply for a liquor license.

“You either sell it or shut it normally but you can’t just turn it over to a new team,” she said. “There’s a huge learning curve.”

In retirement, Gerdes said she plans to read, watch TV, “be a couch potato, and do all the things I never got to do.”

But she’s not ready to completely disconnect from the business world. Gerdes said she still does accounting and bookkeeping work for her daughter’s business, Angel Food Bakery, which closed in downtown Minneapolis over the pandemic but reopened in a new St. Louis Park location in September.

Cynthis Gerdes said she and Omer decided to open Hell’s Kitchen in 2002 after he was fired from a few head chef positions as other local restaurants changed ownership.

“He said, ‘I’m just tired of helping a restaurant turn around and win awards and then losing my job and here I go again,’” Gerdes recalled

Gerdes suggested he start a restaurant – Omer could cook, and she could help with the business side of it.

“I said ‘How hard could it be?’” Gerdes said, laughing at herself. “Oh my God. It never slowed down.”

As they worked on their restaurant venture, Gerdes was still the owner of Creative Kidstuff, a toy store she founded in 1982. She quickly sold the toy business, which eventually closed all locations in 2019 after years under different ownership.

When it came to the restaurant, Omer had the ideas. Cyn found ways to make those ideas happen.

Omer had a big presence, his wife said. He stood 6 feet 4 inches tall and had a booming voice.

In 2015, Mitch got sick and died unexpectedly.

“Everyone loved him, so he left a huge hole to fill,” she said.

There was one piece of the puzzle missing leading to Gerdes’ retirement. The kitchen needed a new head chef. After months of searching, Matt Williams, a former chef who had worked with all three original owners, stepped forward, ready to take on the challenge.“Here comes back a person we highly respect and really can pick up where Steve and Mitch left off,” Gerdes said.

At her retirement, Gerdes gave Mitch’s leather apron to Williams.

Williams worked for Hell’s Kitchen Minneapolis for four years, working under Mitch and Steve. He moved to corporate dining for six years. When he heard about the opening for a head chef, Williams jumped at the opportunity.

Williams said he has been encouraged by the investment the restaurant’s leadership has put into their employees.

“I know she’s worked her tail off forever with everything and it’s special that she feels that she has a team that can not only sustain but do things to move forward,” Williams said. “It makes me feel good. It makes me feel important.”

Once Gerdes officially retires when the new concept launches, part owner and president of Hell’s Kitchen KJ Granberg will step into the role of CEO.

Granberg has worked at the restaurant for 13 years. She was hired as a host and quickly moved to serving and bartending. Eventually she worked her way up to general manager and, in August of 2020, stepped into the president role, working to take on Gerdes’ responsibilities.

Before restaurants were shut down due to Covid-19, Hell’s Kitchen had 141 employees. As the business was able to reopen, employees were brought back in one by one. On peak months, the staff is back to about half of what it was, Granberg said.

Going into the year, Granberg said Hell’s Kitchen Minneapolis is working to bring business back and develop ways for employee owners to contribute to the future of the business.

Employees are eligible for the ESOP after a year of work.

After 2020, there were 14 employees in the ESOP. After 2021, Granberg said there will be close to two dozen new employee owners.

The culture and opportunity for growth is what kept Granberg with Hell’s Kitchen Minneapolis.

“There’s a lot of places that say we’re all family here, but it truly is more than that,” she said. “I was attracted to the idea that owners listen to their employees and really want people to feel like they have a say in the game even outside of the financial. I hope to keep that going.”