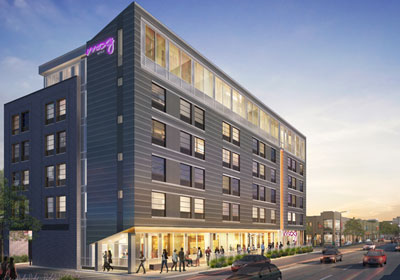 It will be the neighborhood's only lodging space.
October 09, 2016

Minneapolis’ Uptown neighborhood will soon have its first hotel.

Graves Hospitality broke ground on the six-story, 124-room Moxy Uptown on Thursday. The brand, a Marriott franchise, is aimed at millennial-age travelers who want to stay in vibrant urban areas.

“The Moxy is uniquely position for leisure travelers—we call them ‘fun hunters’—who appreciate all the great amenities both within and mere steps from the hotel,” Benjamin Graves, CEO of Graves Hospitality, said in a statement. “Additionally, modern-day business professionals want to stay where the action is and travel to work as opposed to staying in a business core and traveling for recreation.

The hotel site is located on the southeast corner of Lake Street and Emerson Avenue South, about two blocks from Calhoun Square and Uptown’s eating, drinking and shopping establishments. The hotel will boast several amenities too, including “all-day” retail space, a game room and a restaurant and full bar that doubles as the check-in desk.

“This is a new era in Minneapolis,” Graves said. “One that focuses on delivering culturally-enriched lifestyle experiences for guests who seek out vibrant neighborhoods.”

The project hasn’t been without controversy. Neighbors of the project filed an appeal after the city approved the project, saying it did not fit the character of the neighborhood’s small area plan, was too close to single-family homes and voicing concerns about guest parking. The city denied the appeal, allowing the Moxy to go forward.

The hotel is slated to open sometime in fall 2017. It isn’t the only Moxy-branded hotel slated to open in Minneapolis: Graves Hospitality is also working on mixed-use project at Washington and Chicago avenues near U.S. Bank Stadium that will include retail, 166 apartments and a 153-room Moxy hotel.

TCB previous covered the Moxy project in our January 2016 issue.